The markets are beginning to reflect the “doubly” nerve-wracking effect of the fact that there are two electoral risks in France. It’s not only Marine Le Pen now; Jean-Luc Mélenchon is unexpectedly gaining ground, to such an extent that there’s a possibility the second round will consist of Le Pen versus Mélenchon. Look at the 2- and 10-year bond risk premiums. 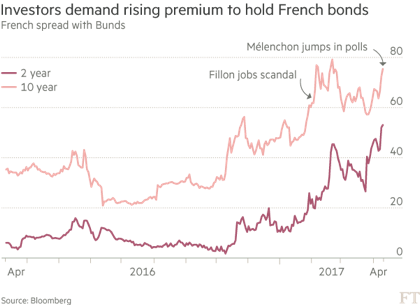 And who is Mélenchon? A left-wing politician with some Soviet leanings, anticapitalist, who plans to propose to Germany a Keynesian fiscal policy for Europe financed by the ECB. And if it doesn’t accept this, then give orders to the Bank of France to begin issuing euros and create his own social policy. A kind of French Modern Monetary Theory. What Syriza had in mind for Greece, but he was intimidated. Mélenchon says he won’t be and that France is not Greece.

There is less than one week left to the first round of elections.

The Day Tsipras Betrayed His People. Would Le Pen Do The Same?