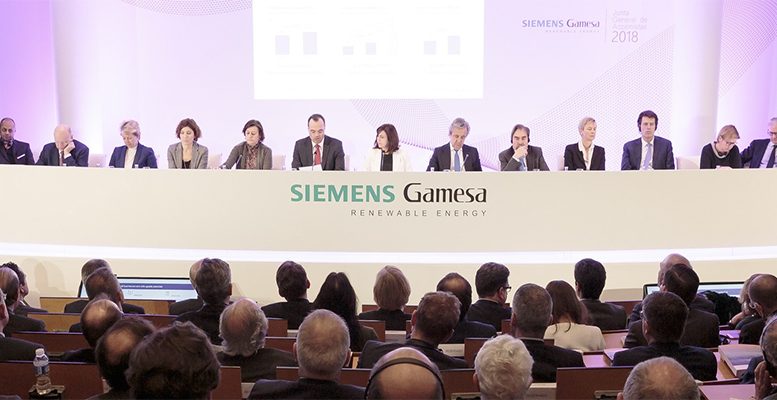 Last Friday, Siemens Gamesa held its first AGM in Zamudio (Vizcaya). In the merged company’s first meeting with shareholders, the main partner Siemens AG, with 59%, knocked down the initiatives which Iberdrola (with an 8% stake) proposed. Namely, maintaining the company’s headquarters in Spain and strengthening its corporate governance in terms of related-party transactions.

Although both the CEO of Siemens Gamesa, Marcus Tacke, and chairwoman Rose García have insisted there is “no doubt” that Spain will remain the company’s “seat of power,” Iberdrola’s Corporate Governance director, Iñigo Elorriaga, requested that its two proposals be approved.

During her presentation to shareholders, the chairwoman of Siemens Gamesa said the company is now embarking on “a new phase”, after a “difficult year” and flagged that “the reasons for the merger are now even more important than ever.”

She insisted that in 2018, Siemens Gamesa will complete its integration “will establish the new company and launch new products” while in 2019, “it will accelerate growth” and in 2o2o, will ensure “a sustained return.”

The chairwoman of the wind turbine manufacturer took advantage of the AGM to defend the work of the board of directors and its independent character. She referred to its make-up, 13 members “of which only six are dominical directors,” five from Siemens Gamesa and one from Iberdrola.

She also reminded shareholders that the company’s management centres “are here” and “they have not been moved.” The intention is “to maintain the seat of power…and make the company a Spanish one.”

“Siemens Gamesa is a Spanish firm. Its effective administrative and management centre is here. Up to now, there is no decision or plan which would cast doubts over the commitment to maintaining the HQ,” she said.

She also highlighted the fact that six of the eight top managers in the company live in Spain. “The effective and operational HQ is located in Spain and nobody  has proposed that this is going to change. There is no discussion about relocation. We are proud to be here.”