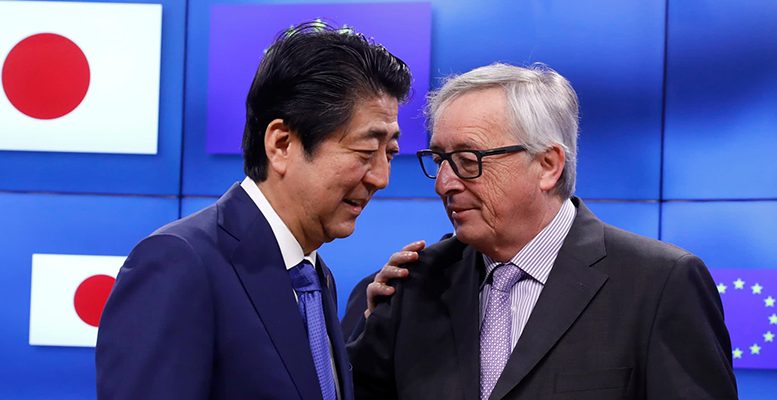 After the bloc last year launched its “Asia connectivity” strategy, it seems Japan is wasting little time in throwing its hat in the ring; Beijing, on the other hand, seems determined to forge ahead with its own “new Silk Road” of railways, ports and roads stretching across the world relying on billions in Chinese loans.

The EU-Japan agreement is explicit in stressing the importance of the environmental and fiscal sustainability of joint projects.

“Connectivity must be sustainable in financial terms- we must bequeath to the next generation a more interconnected world, a cleaner environment and not mountains of debt,” said Juncker at the signing ceremony, “it’s also a question of creating interconnections between all countries in the world and not merely dependence on one country.”

Juncker’s comments surely reference the growing body of critique aimed at China’s Belt and Road Initiative. Endorsed by more than 150 countries and international organisations, including more than half of the EU’s 28 member states, Beijing’s infrastructure ambitions have come under fire of late: commentators have charged the project with opaque funding, a failure to meet environmental standards, and a tendency to saddle host countries with unsustainable levels of debt.

In contrast, the EU-Japan agreement now calls for “transparent procurement practices, the ensuring of debt sustainability and the high standards of economic, fiscal, financial, social and environmental sustainability”.

Abe hailed growing cooperation between Brussels and Tokyo as a “resounding declaration” at a time when “the values and principles we have held dear could waver or drift.” In a concurrently released defence white paper, Tokyo charged Beijing’s ambitions with being “incompatible with the existing international order.”

“Whether it be a single road or a single port,” Abe said, “when the EU and Japan undertake something, we are able to build sustainable, rules-based connectivity from the Indo-Pacific to the Western Balkans and Africa.”

In practice, such a collaboration could include EU financing for Japanese firms keen to use drones to map roads in African countries, or Japanese financing for European renewable energy initiatives looking to expand into Asian markets. Bilateral talks on sharing air passenger data to improve aviation security has also been floated by the EU.

The EU’s infrastructure drive forms part of a broader regional push to transform itself from “payer to player,” that is, a bid to channel Europe’s economic clout in trade, aid and investment toward specific, strategic foreign policy aims.

Juncker’s replacement Ursula von der Leyen will take office in November, and will do so on a pledge to make the EU a more significant geopolitical player.