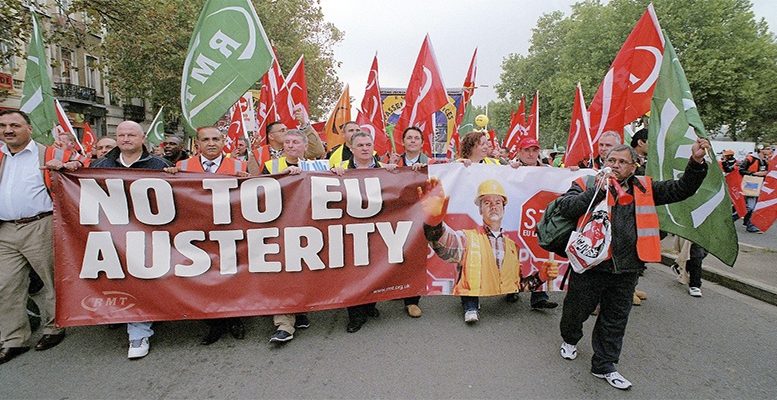 As you all very well know, Spanish social democracy is in the dolrums. The PSOE, the one-time influential left-wing party, is now in tatters and without any visible head to start rebuilding it. We have the same panorama in the rest of Europe, in France for example, where Manuel Valls failed in the primaries despite being Prime Minister. Valls perfectly exemplifies the reason for this whack against half of Europe’s stability: a socialist minister who halfway through his term in office starts to implement austerity policies and cuts in workers rights – although he failed spectacularly in the case of the 35 hour day.

The fact is that in the Europe of today, ruled by the ideology of austerity and supply-side policy, where there is a lack of any escape valves like exchange rate flexibility, there is no room for left wing social policies. And the bad thing is that the left put the rope around its own neck when it teamed up with the democratic right to promote and launch the euro. It thought the new currency was going to allow it to manipulate exchange rates across Europe controlled by left wing governments. But what has happened is that now it does not have a playing field to be able to offer and develop social welfare policies. I don’t know who advised the social democrats so badly, but the truth is it sent shivers down the spine to see them together, the right and the left, parading under the flag of the euro which was going to necessarily clip governments’ wings.

With the consolidation of the euro, and the Germans’ aversion to tax frivolity, what space is left for a left wing party? Exactly the same as for a right wing government: supply-side policy, namely a flexible labour market and a fiscal surplus. It’s true that there are other supply-side policies apart from those two main ones, as described by Hermann Simon, chairman of SKP. A policy for training the working class, with a dual nature – as he himself says – namely, the theory outside the company and the practice inside it, one of the sources of a long-term increase in productivity which is so necessary for a country. But the PSOE, for example, is remote from this, as is indeed the PP. Let’s read what he says in response to the question of whether Spain has a lot to do here:

“The success of Germany’s export industry is due to many factors. The first is the ambition of many businessmen, which pushed them towards specialisation. Since this focus implies a small market, the next step was to reach a big market. In other words, to sell globally. To do this, they created their own subsidiaries abroad. Another premise of leadership is to constantly innovate and be close to the customer. And for this you need highly-qualified personnel who are loyal to the company. These are strategies which can be learned.

In Spain, I have noticed that there are a lot of businessmen who are content with their local success. But in a global context, this attidude can be dangerous. The key is to combine specialisation and internationalisation, without forgetting training for employees. I believe that Spanish industry has opposed the implementation of dual training, which allows for technical training to be completed with practical training in a company. And that is really bad.”

For that reason, it doesn’t depend on ideology but on culture, which explains why Germany did so well during the crisis and why it refuses to implement fiscal policies to help southern Europe. This gives the impression that it’s not in Germany’s interest to lose the great advantage it has in the world, which has allowed it to be independent of the rest of Europe’s fate. In other words, Germany is not going to give in easily to the demands for more European unity, which is the only thing that would allow some margin for a unified and homogenous fiscal policy. Although, quite honestly, I don’t think it will work satisfactorily for everyone, but on the contrary will be a potential source of division over objectives and means. Germany has a very special economic-social model, which is not pure capitalism, and is composed of three or four parts, workers, employers and the state, which is difficult to imitate in a different cultural context.

So with the euro, fiscal limitations and European regulation, there is no room for social democracy...unless it has a total makeover and tries to “socialise” its supply-side policies which are the only ones available. This would require new leaders, big internal battles, a long process, but with objectives which are not the ones currently being discussed. In other words, a new PSOE party from the General Secretary down to the very last militant.

Does this mean that a PP government is assured? Nothing is certain in the world, nor in Europe. Above all, Rajoy is an adaptable person who has fitted in quite well  in Europe, where he moves with ease. But Europe’s current state is not assured. There are threats from within and without. From without, there is Trump who is going to pull away from the defence of Europe, which is a tragedy. And from within, its populist enemies are increasing. Brexit is a future enemy. Rajoy without the current Europe would be nothing. And Spain?