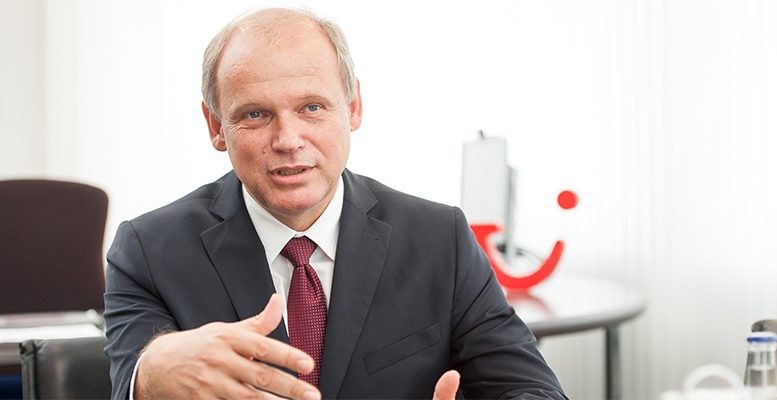 Germany is a country of travellers. Three out of every four people go on holiday at least once a year. And Spain is their main foreign destination: over 10 million Germans visit the country on an annual basis – spending almost 10 billion euros – running a close second to the number of UK tourists to Spain. Almost half of them travel with a package deal from TUI, world leader in the sector. Sebastian Ebel is the CEO of TUI Germany.

Question: The UK is the main issuing market for Spain. What do you think the consequences of Brexit will be for the tourism sector and for TUI?

Answer: For the time being the pound’s depreciation, due to the referendum result, is not affecting us. We were worried about we earn in pounds – in the UK – and our costs – partly in euros – so we took advance necessary measures. In fact, before the June referendum we had already sold over 70% of our summer holidays offer in the UK. Furthermore, the British market is different from the rest because the majority of our clients buy all-inclusive holiday packages. This lets them know exactly what they will spend, irrespective of the possible impact of Brexit and the UK’s eventual departure from the European Union. Of course if the pound were to fall in the longer-term, the British people’s purchasing power would be weakened…But I don’t think they will opt to travel less for this reason.

Q: To what point are digital intermediaries like Airbnb or Uber a threat for the hotel industry? According to Berlin’s Antimonopoly Committee they increase competition and in the end benefit consumers. What do you think? Will travel agencies end up offering private homes?

A: We believe that digital booking platforms can help us increase our sales channels. That’s what we are doing already through our own brand Atraveo, which offers holiday homes, and through another platform, TUI Villas. But you can’t compare our business model with AirBnB or any other similar platform, which are merely intermediaries. TUI is an integrated consortium, with its own content and assets. We represent a complete value-added chain, from the initial booking to flights in our own planes, overnight stays in our own hotels, including journey to and from, excursions in the destinations and cruises on our own boats… They are completely different business models. And it is precisely our model which makes us strong and, at the same time, flexible enough to react and adapt to tourism demands in normal times as well as in times of crisis.

Q: Most Germans have already visited Spain. What future do you see for Spain as a tourist destination?

A: Spain is a very attractive tourist destination and will surely remain so in the future. Of course this will be conditioned by the fact that even in times of high demand like now, it continues to invest. Not just to modernise its hotels but also to develop new tourist regions, wherever that is reasonable. We are betting strongly on our RIU hotels in the Canary Islands, investing now in their modernisation and we see a positive response from our clients. Spain offers tourists everything, from good three-star hotels to luxury establishments. In addition, it responds well to all the latest trends. The key thing about Spain is its diversity: beaches, cities, culture, sports…It has a huge offer for both organised tourism and individual travellers.  And the cruise industry can take advantage of coastal towns and the whole of the Spanish coast…We always start our winter season with cruises from the Canary Islands.

Q: A family of four people has to spend a third more to holiday in Spain than in Turkey…Will Turkey, Bulgaria or Greece be on a par with Spain one day?

A:Bulgaria is cheaper and Greece a bit more expensive. And both destinations are benefiting from the weak demand for holidays in Turkey. It’s true that both Bulgaria and Greece are growing strongly and are very interesting destinations for families with small children, but…

Q: At end-2017 the EU countries will have to implement the new European directive on package holidays  which boosts protection for consumers who buy travel packages, whether offline or on the internet. How will that affect your business?

A: Neither the new European directive nor, in many cases, national legislation goes as far as we do. The on-line booking platforms, which offer travel packages which can be combined, are only computer programmes. They do not have agents or travel guides in the destinations, nor the resources to look after their clients.