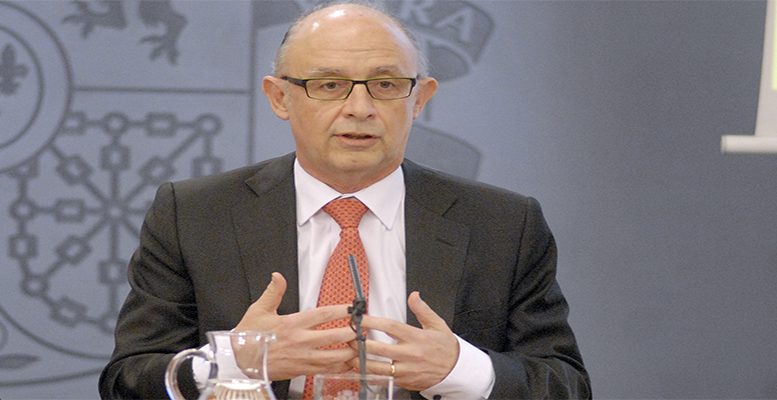 Europe has some of the highest rates of tax pressure in the world and now people are beginning to realise that this is not good for growth. So there suddenly seems to be a push to cut taxes. Donald Trump is going to do this in the US and Emmanuel Macron in France if he wins the elections and becomes President. Then there’s Theresa May in the UK who will cut taxes by up to 17% if Europe makes things difficult with Brexit. And Mateo Renzi also wanted to reduce taxes before he lost in Italy’s referendum.

So what about Spain? Well here they’re going up. In spite of the PP’s claims of being liberal-spirited (increasingly unbelievable), Finance Minister Cristóbal Montoro presented a plan a few weeks ago, as we know, to raise 7 billion euros more in 2017. A good part of that money will come from the changes – and not hikes in the rate – to corporation tax, with which the minister aims to gain an additional around 4.2 billion euros. The rest will come from special taxes on tobacco and alcohol and a new tax on sugary drinks. This as well as the fact that Montoro already warned that environmental taxes will also rise this year.

According to the plan, the rate will remain – untouched – at 25%, but certain exemptions and deductions which meant that companies, particularly the big ones, paid much less than 25% will be eliminated. These changes in corporation tax will allow the minister to raise 26 billion euros, far off the 44 billion which was usual before the crisis.

It has to be said the minister is not the only one to blame for this move. He has to cut spending by 16 billion euros this year to reach a deficit of 3.1% and Brussels has told him, has advised him that, well, he has to raise taxes. A recommendation he also got from the IMF.

Faced with this increase, businessmen went on the warpath. Although for a short time. The CEOE said these increases will not be good for the economy. And they will put the brakes on investment in Spain. True or not, the fact that the international financial press has announced that Spain is enthusiastically about to raise taxes does not precisely help the country’s image as a recipient of capital.

Furthermore, the CEOE became even more angry as it outrightly rejected the minister’s claims that the big companies don’t pay taxes in Spain, and it was simply a case of putting things in their place. According to the minister, the big firms in the Ibex-35 only pay 7%, while the mid-sized companies pay 18%. The CEOE says this information is not correct. It’s true they don’t pay 25%, but they do pay 19%. And this is due to several factors, one of which is that these companies generate a good part of their profits outside Spain where they also pay taxes.

The worst thing is not the measures themselves – given that their seriousness is in fact limited – but more what it transcends. In other words, the spirit which drives Montoro, Rajoy and the Popular Party, a spirit which is little inclined towards the liberal idea that lowering taxes is a good thing. There is now no doubt that they don’t think that with the exception of a few of them like Cristina Cifuentes, president of the Community of Madrid.

A situation which has deteriorated due to the lack of sensitivity over this issue on the part of practically all the parties. It’s not that Podemos or PSOE don’t want to lower taxes, it’s that they want to raise them! Even Ciudadanos shows very little interest in limiting them. The recent spectacle of some regional presidents, indignant with the “low” taxes in Madrid, sets the tone for what our politicians think about this matter. As well as what awaits us.

Another hellish idea, which serves to justify-legitimise these tax hikes, is that tax pressure in Spain is low compared with other countries in Europe. Something which is true, only apparently. Spain’s fiscal pressure is 34.6% while in Germany it’s 40%, 48% in France and 43.5% in Italy. But the problem is that while the fiscal pressure in northern European countries is more less evenly distributed, this is not the case here.

We all know that here there are few big companies which produce the huge amount of tax revenues like in Germany or in the UK, while thousands of SMEs and shops pay testimonial amounts. Not to mention that there are whole sectors (rentals, for example) which to a large extent are outside the system. If we add to this a black economy of 25%, we have the complete picture of this lack of proportion when it’s time to pay taxes.

Here employees and the self-employed pay. Despite the fact that Spain’s Tax Office has the best computer systems in Europe, they remain fairly unparalled in their possibilities. Basically because there is a lack of personnel to operate them. Spain has one of the lowest rate of tax inspectors per 1,000 inhabitants in Europe.

So it looks like it’s the easy way out which wins the day. Neither a control on spending, nor a firm and consistent fight against tax fraud. That said, we can consider ourselves lucky that the government has not gone back on its previous cuts in personal income tax and raised it again. That would have been a real scandal! Now it’s the companies turn. A good thing for the citizens. Although that doesn’t take away from the fact that the end result is a fair amount of improvisation, which is harmful of course.