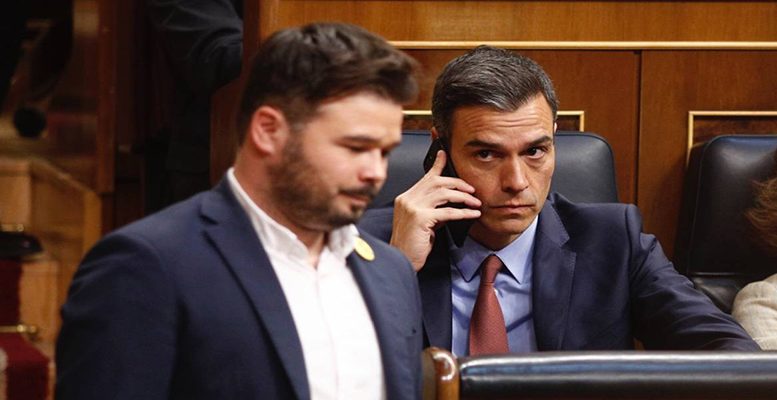 Nick Ottens (Atlantic Sentinel) | Talks about transferring more power to the region, which Prime Minister Pedro Sánchez promised in return for the support of Catalonia’s Republican Left, were postponed when COVID-19 broke out in March and have yet to be rescheduled.

So do snap regional elections Catalan president Quim Torra called for in January.

Torra, whose center-right Together for Catalonia rules in a coalition with the Republican Left, was disappointed when the other separatists agreed to enforce a ruling by the electoral commission to strip him of his status as lawmaker.

The electoral commission found that Torra had violated rules on government neutrality by hanging a banner from his palace in Barcelona during the last election that demanded the release of nine prominent separatists who are in prison for leading a failed independence bid in 2017.
Separatists split

Together for Catalonia was gaining in the polls at the expense of the Republican Left earlier this year, when the latter made a deal with Sánchez.

But now the former has split, between the strident separatists of Torra’s predecessor, Carles Puigdemont, who lives in self-imposed exile to avoid arrest for leading the attempted breakaway in 2017, and the more moderate Catalan European Democratic Party.

Some of the moderates, led by Marta Pascal, have created yet another pro-independence party, but one that opposes unilateral secession from Spain, called the Nationalist Party of Catalonia. The only poll that has included it so far puts its support at 1 percent.

At the other end of the separatist spectrum, support for the far-left Popular Unity Candidacy, which argues for leaving Spain based on the outcome of the 2017 referendum, which opponents of independence boycotted, is stable at 5-6 percent.

Between them, the four independence parties would get roughly one in two votes.
Unionists

The liberal Citizens and conservative People’s Party, who formed a unionist pact in the Basque Country in February and may jointly contest the next Catalan election as well, are polling at a combined 16-20 percent.

The Catalan branch of Sánchez’ Socialist Party is at 17-20 percent. The far-left Podemos (We Can), which governs with the Socialists nationally, and the left-wing Catalonia in Common, led by Barcelona mayor Ada Colau, would take another 7-9 percent.

3-5 percent of Catalans support the far-right and nationalist Vox (Voice), which wants to revoke the region’s autonomy and centralize power in Madrid.