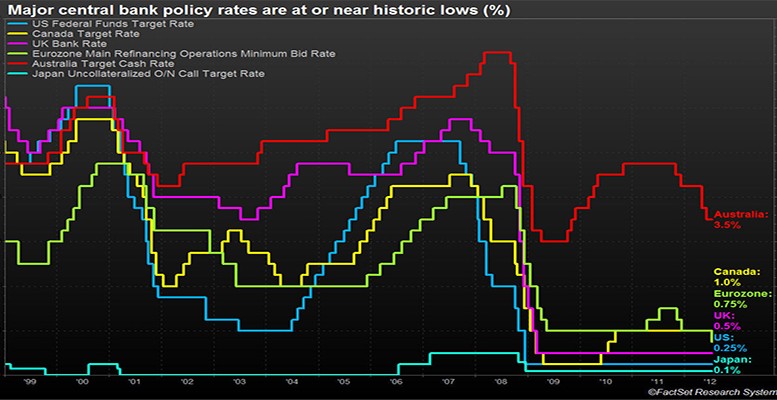 Are we putting the responsilibity of exiting the crisis on central banks’ shoulders? Is ECB’s president Mario Draghi doing traders a favour by playing down the ECB’s responsibility for contributing to volatility? Professor of Financial Mathematics at Bocconi’s University Marcello Minenna answers to these questions from Milan and argues that a low interest rate environment is here to stay.

Central banks, particularly in the U.S. and U.K. where economies have recovered, still have crisis-like interest rates near zero. Denmark, Sweden and Switzerland have negative policy rates. Does this make any sense?

Well I think here we are facing two different problems. A very low interest rate environment is usually considered dangerous for a central bank since it reduces its room to maneouvre if an exogenous shock hits the economy and a response is needed. The central banks may back themselves into a corner where only extraordinary, unconventional measures can be applied as the standard tools for lowering interest rates have been exhausted. This is the dilemma behind the much announced, but never realised rate hike in the US. An increase in the interest rate level may be necessary to normalise financial markets’ activity, but may have a recessionary effect on the real economy.

With regard to negative interest rates, they are an as yet unexplored novelty for the financial markets. They are, substantially, the result of the implicit back-up policy (the call option) of the central banks for the financial markets, which have sustained the prices of financial assets at unprecedented heights. Higher prices obviously mean lower yields and the massive monetary expansions of the USA, Japan and the EU have pushed the phenomenon towards the bizarre world of negative yields.

Of course. Germany has experienced until April 2015 a negative cost for refinancing government debt which means that borrowers have paid Germany for the privilege of lending money to the government. In this case, the phenomenon is exacerbated by the fact that the risk of a euro break-up is always latent within the eurozone. This would mean a return to their national currencies for each member country which, in the case of Germany, would a re-valuated euro-mark. Hence the negative rates would represent the privilege of this chance of revaluation. Negative rates also have unchecked, harmful effects on the long term returns which investment and pensions funds can achieve, with dubious impacts on the sustainability of welfare systems. The widespread use of cash is a natural limit for the hysteresis of the negative interest rates’ phenomenon as, of course, a negative yield encourages the hoarding and use of cash with respect to more sophisticated payments methods. The more an economic system becomes used to functioning without cash, the more it can endure negative rates (obviously at a cost for the savings side of the economy).

In its last annual report the BIS repeated its warnings of recent years that ultra-loose monetary policies may do more harm than good. But is there an alternative to QE?

We are certainly experiencing an unexpected period of prolonged low interest rates, which shows no signs of stopping. On the contrary, and in 2015 alone, another 7 major central banks worldwide have further loosened their monetary stance within a perspective of stemming deflation threats and reignite growth. The current weakness of basic commodity prices (oil, coal) does not suggest a clear resurgence of inflation in the near term. So I’m keen to believe that a low interest rate environment is here to stay. Obviously, this “artificial” suppression of yields is distorting investors’ behavior, favouring an aggressive risk-taking in the frantic search for a decent return on investment. This shift in investors’ attitude can be observed both at the institutional and retail levels, as the ongoing burst of the Shanghai asset bubble is demonstrating in real time. In other words, we have to become accustomed to observing and managing the “bubble and burst” assets model, since this development in the global economy is inherent within an ultra-low interest rate environment. Frankly speaking, I consider these phenomenons as an acceptable side-effect: in a debt-inflated world, deflation is the real enemy, since it may quickly transform normal-performing debts into unsustainable weights on the world economy. This is particularly true of the eurozone, where the huge debts of peripheral countries are threatening the stability of the currency area.

Are we putting the responsilibity of exiting the crisis on central banks’ shoulders as Mario Draghi said?

In normal functioning currency areas, monetary policy is only one of the arrows the policymakers have in their quiver. So in the USA or Japan it is certainly easier to implement coordinated monetary and fiscal policies aimed at boosting the economy. In the US, for example, quantitative easing was quickly sustained by a fiscal stimulus (a tax rebate) with good results shown in the short-medium term. But in the eurozone, with 19 different fiscal stances which often contrast with one another, the ECB’s monetary policy is the only available tool to control inflation and manage the economy. Probably we are expecting too much from the European Central Bank particularly if, in addition, we have to consider that the ECB board is the synthesis of different visions regarding the role of the Central Bank in the economy (the rigid ultra-orthodox view of the Bundesbank and the more pro-active views of Banque de France and Banca d’Italia). The end result is that the capacity for EU institutions to intervene and weight up the effects of the international financial crisis has been impaired. As a result, the eurozone is still struggling to catch up on a recovery that is well advanced in the rest of the OECD countries.

You didn’t agree with Mr Draghi when he said we should get used to periods of high volatility. Is Draghi doing traders a favour by playing down the ECB’s responsibility for contributing to volatility?

Many words have been spent on the theory that the ECB’s QE is inherently volatile by construction. I still believe there is margin to improve the procedures with which the asset purchases are implemented. And certainly at the moment, with a new phase in the 5-year long Greek crisis unfolding before our eyes, the idiosyncratic effects of the ECB’s QE are probably completely overwhelmed by the volatility sparked by the Greek events. In the end, I think that a polemic tone on this issue at this stage appears a bit pointless.

After injecting all that liquidity into the system, at some point we should see some inflation (and/or growth) according to basic economic theory. Should we be worried about that instead of deflation? Or is liquidity only feeding asset bubbles?

Assuming a direct and linear relationship between monetary aggregates and the rate of inflation is misleading and can lead to the wrong diagnosis of the problem. As long as the liquidity remains inside the financial system, Core Price Inflation will not be affected by monetary expansion. This is the acknowledged problem in all the designed versions of QE. By allowing the banking system to intermediate monetary stimulus, the policy makers are not certain the expansionary effect will be transmitted to the real economy.

The so called “pass through” effect of monetary expansion to the real economy via cheap, affordable loans depends on the health of the banking system and the economy itself. On the one hand, if the banks are not adequately capitalised they may be tempted to divert the funds received from the central banks (via outright asset purchases or low cost loans – that is not an important detail) to safer investments in financial assets which are more favourably accounted for on their balance sheets, i.e. high quality bonds. In the eurozone QE, and in the previous 1 € trln LTROs to EU banks, the monetary flows from the ECB have helped refinance EZ countries’ public debt as well as deleverage the private loans of peripheral banks. But they have had little effect on the dynamics of loans to enterprises.

On the other hand, if the economy is in a recessionary state, many projects in the real economy (infrastructure, real estate developments) have very low returns and carry a considerable level of risks. Looking for maximum yields, banks may employ the additional liquidity to fuel investment in financial markets, hoping to influence the price and secure an easy capital gain. This is particularly true in the case of Japan, where QE has propped the equity markets up to 100% of their initial capitalisation levels, but the results in terms of the loan expansion to the real economy have been modest so far. To explain the impressive performance of Japan’s financial markets we also need to take into account the role of the BOJ, which is authorized to intervene in all the markets with direct purchases, including corporate equity assets. The raw data tell us that the BOJ is very active in the markets, often covering the role of “buyer of last resort”. In other words, the BOJ has sold (at no cost) an implicit call option to banks which invest in the financial markets; this is an important distorsion of the “pass through” effect of QE to the real economy. Is it an asset bubble? Well if we want to define the Nikkei225’s performance in these terms, we would need to be certain that the current rally in asset prices could deflate; paradoxically, I’m not sure the BOJ would allow a sharp decrease in stock prices at any point.