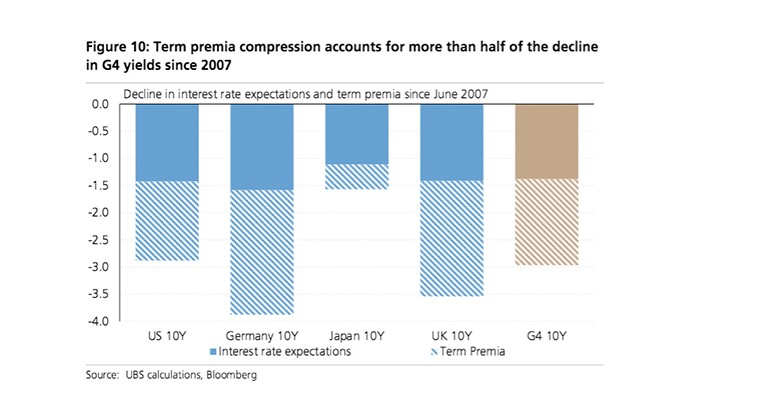 UBS | With central bank balance sheets at their largest on record, yet risk assets struggling, investors are increasingly questioning the efficacy of Quantitative Easing (QE). We take a detailed look at the impact of QE on asset prices through its portfolio effects, as well as throught he dovish policy signal it sends.

A Significant Boost to Bonds and Equity Valuations…

The QE impact on market portfolios has had the biggest effect on asset prices. We find that 30% of the decline in G4 bond yields and 35% of the improvement in G4 equity valuations since 2008 can be attributed to the portfolio effect. The dovish signal that QE has transmitted has also supported asset performance. When this signalling effect is also accounted for, we find that policy easing likely explains more than 50% of the valuation boost across equities and bonds.

…That Will Likely Persist Throughout the Cycle

With much of central bank asset purchases already complete, it is reasonable to worry that some of the QE boost may reverse, as the cycle matures and central ban ks tighten. We find that the probability of a significant unwind of the Fed’s balance sheet is low; and this low probability is likely already priced in. This is because it is fairly unlikely that the growth cycle will be synchronized enough across the G4, for the Fed to be able to meaningfully reduce the size of its balance sheet. As such, the portfolio effect of QE in particular is likely to persist.

Are Stocks and Bonds As Expensive as They Appear to Be?

On average, we believe the effects of Quantitative Easing on assets justify higher equity and bond valuations relative to the pre – QE era. And this also means that, in the next economic downturn, stocks will likely bottom out at a higher multiple than in past cycles.

Is There Room for Further Policy Support If Market Conditions Deteriorate?

Yes, particularly so from the US. We show that, since 2013, and in anticipation of Fed tightening, US interest rate expectations have risen significantly. And at the same time, the market has factored in some probability of a QE unwind. As the experience from G4 bonds shows, there is significant room for further policy relief to filter through to US bonds and stocks, and through them to global assets.

Limited Impact on Currencies, Outside the Yen

We find that central bank s’ signals on policy rates are more important than QE for currencies. We find that Euro – area bonds incorporate a significant probability of further easing, while US bonds are priced more hawkishly. Consistently, we expect US vs EU bond yields to narrow and EUR/USD to bottom out.