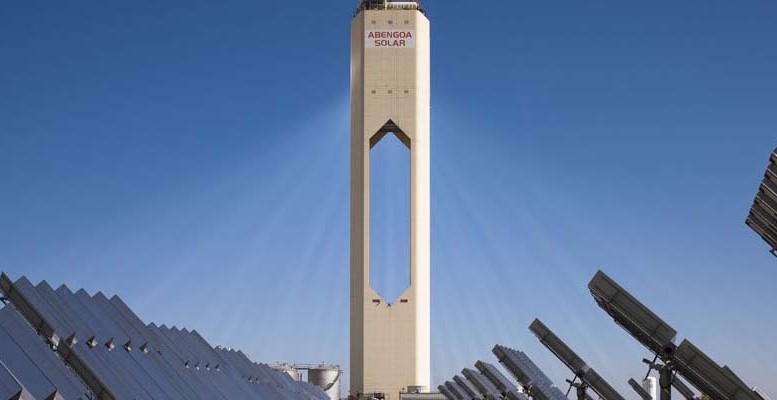 After earning the unhappy reputation of being the protagonist in Spain’s biggest ever bankruptcy case, engineering and renewable energy company Abengoa could be worth taking another look as a summer investment bet – albeit a high risk one, according to analysts at Carax Alphavalue. They explain:

“Do not bin the idea just yet. Abengoa went through a near death
experience triggered by a lethal combination of excess leverage and volatile cash flows in the renewables business where it built up as an engineer energy concession assets that it went on to own and operate. The model blew up by late 2015!”

“But by March 2017, Abengoa completed its financial restructuring process, including the share capital increase. As a result, its consolidated gross debt has been reduced from €12.2 billion by 2016 to €5 billion by 31 March 2017…The Updated Viability Plan significantly reduces Abengoa’s risk and cash needs as a result of the change in the perimeter: out of the €5.7 bn remaining gross debt, €2.3bn stems from businesses classified as held for sale.”

Abengoa has been able to raise funds from a series of recent divestments. These include the sale of Bioenergy Europe, Bioenergy USA, Bioenergy San Roque, Ashalim, and Qingdao, amongst others. Carax Alphavalue says the next important disposal is that of Atlantica Yield:

“The sale of Atlantica, as well as the A3T project – a 220MW cogeneration plant in its final phase of construction, located in Mexico – will allow the repayment of the debt funding made available for the restructuring period.”

The analysts flag that the second half of 2017 will “remain an intense divestment phase with an endless list of projects disposals” across the globe. Amongst others, the Norte III combined cycle and the Zapotillo aqueduct in Mexico, the Tajo Hospital, and desalination plants in Ghana and Chennai.

“This remarkable list is indicative of the “old” Abengoa’s extreme ambitions. Now the company needs to restart its commercial pipeline. There is hope,” Carax Alphavalue says.

A limited restart
The analysts highlight that Abengoa is to return as a strong player in E&C for turnkey or concession-type projects, hopefully with no cash.

“In the first quarter of 2017, new projects represented an approximate value of €200 million in Chile, Argentina, the UK and Belgium, amongst others. The backlog in E&C was around €2.4bn while potential projects are being appraised for a value in excess of €30 billion.”

Abengoa is targeting a backlog worth €4.8 billion in 2020, equivalent to €4.2 billion in revenues, “due to its strong pipeline and sound skills in traditional engineering activities for the energy and water sectors,” says Carax Alphavalue. This implies “a huge acceleration in the next three years, while 2017 should be considered as a year of re-foundation.”

So let us dream

Net debt should be well below €2 billion in 2018, while revenues will progressively trend towards €2 billion coupled with a 10% EBITDA, says Carax Alphavalue. They note that:

“In this case, with roughly €100m in financial expenses, the investment case is centred on revenue growth and cash-flow expansion.”

The experts conclude that:

If Abengoa succeeds commercially, its net debt will morph even more quickly into equity value. Investors will hesitate to commit to any scenario before the firm provides pro forma figures that would be attractive. As the disposals unfold, it is unlikely that this clean picture will emerge rapidly. But who knows and keep an eye on the top-line development as the crux of the issue.”