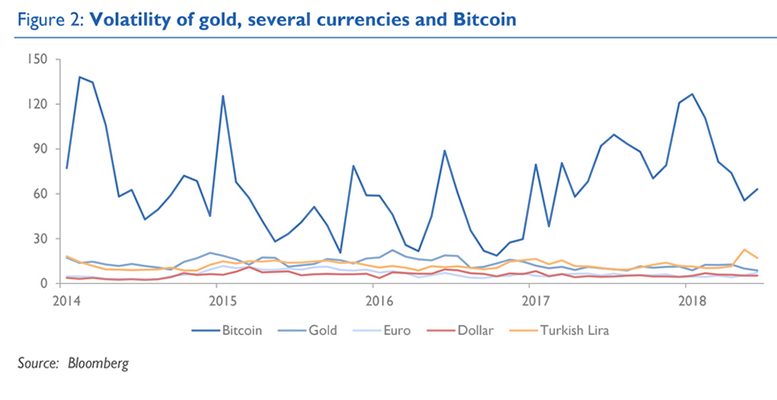 Ignacio de la Torre and Leopoldo Torralba (Arcano Partners) | Regarding Bitcoin, we are reaching a point where there is great confusion between the price and the value. If I buy a Bitcoin at $6,000 I would expect a higher value that justifies the greater risk that comes with it (it is extremely volatile, over 60%; while the volatility of currencies like the euro or dollar are less than 3%).

When analysing the financial price of Bitcoin it is interesting to see that there is a direct correlation between its price and the number of Google searches for Bitcoin. As more people become interested in the asset, with greater media publicity, and supply remains limited, the price undoubtedly rises with more people looking to get in on this market, generating a virtuous or vicious cycle depending on which way you look at it. It is also interesting to note that given that Bitcoin’s underlying technology is the Blockchain, which implies total anonymity, a part of the demand may be linked to illegal activities, such as financing an illegal referendum (such as in the case of the Catalan referendum, paid for with Ethereum, a Russian cryptocurrency), or money laundering, a sector that could represent more than 10% of world GDP.

Additionally, part of the demand for Bitcoin and other similar assets stems from trust in its security, however, the markets that trade Bitcoin and other cryptocurrencies have already been hacked. Youbit, the Korean Bitcoin market lost 17% of its assets in December of last year due to a cyberattack, which has meant investors can only recover three quarters of their money. The Japanese MT Gox market declared bankruptcy in 2014 after a cyberattack which made 850,000 Bitcoins disappear, the same happened with the Hong Kong Bitfinex market, which lost $70 million.

These events have generated substantial losses for investors, which has, in some cases (China and Korea), encouraged the intervention of regulators and could result in lower future demand. Additionally, the demand for Bitcoin is greatly dependent on trust and confidence in the system, believing that it can become a universal means of payment. However, in practice, it is not. Bitcoin is not accepted in many places and with its high volatility and the large transaction cost (which can be up to 10%) does not appeal as being a useful means for payment.

Finally, as we will expand on later, there are important reasons why governments will end up regulating and intervening in demand markets, limiting the demand, which could affect the price.

On the supply side, the most important feature of Bitcoin is that it is finite. There cannot be more than 21 million Bitcoins, of which already about 17 million (80%) are in circulation. The generation of Bitcoins requires a complicated mathematical process that involves the intensive use of computer programming, which in turn consumes a lot of energy, hence the producers (known as ‘miners’) are usually based in countries where energy is very cheap such as Russia or Venezuela. With limited supply and theoretically huge demand the price is bound to be very high. However, as Smith explained, high demand generates greater supply, and if Bitcoin is not able to provide this supply, other cryptocurrencies will benefit, such as EOS, Ethereum, Ripple or the numerous other recent ICOs.

It is interesting to note when analysing the economic price of Bitcoins that generating new Bitcoins requires increasingly more mathematical computing, increasing both the energy and time needed, and thus making it more expensive. If the price of Bitcoins remains high, the miner is incentivised to continue investing time and money in generating new coins. However, if the price drops, the miner has a lower incentive to do so, with a smaller profit margin, and may rather decide to dedicate his time to verify Bitcoin transaction, made through blockchain. That is to say, transaction costs will increase even more, and are already extremely expensive, which will cause a lower demand for users perceiving a transaction cost higher than expected.

The risk here is that the situation reduces demand, generating a vicious cycle between miners and ‘users’. Important to note that the inventor of Bitcoin, who goes under the pseudonym Satoshi Nakamoto (it is unknown if this is one person or a group of people) owns almost a million Bitcoins, 5% of the total, which translates to a ‘fortune’ of $5.2 billion. What would happen should Nakamoto decide to sell off a large portion of his holdings? Given the narrowness of the market, it could cause a spiral, which would encourage people to return to analysing the fundamentals.

*You can read the full report here.