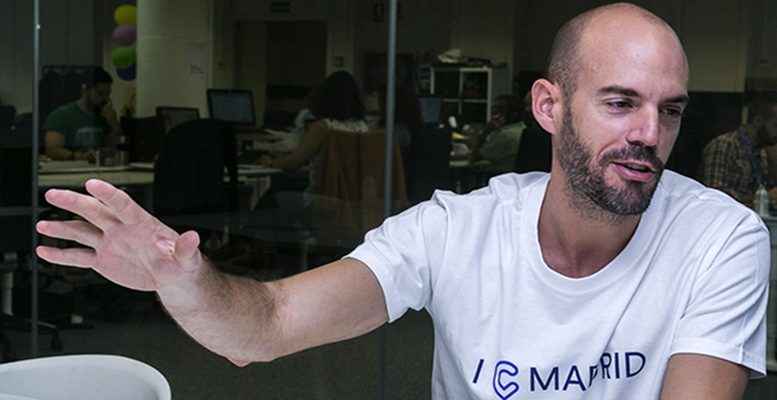 Juan de Antonio, CEO of Cabify, firmly believes that disruption is the main driver for progress in business. “Wealth is generated outside our continent and Cabify is an example of a Spanish company which would have died if we hadn’t left here.” With a degree in Telecommunications Engineering from the Madrid Polytechnic University (2002), he launched Cabify in 2011 along with private investor Adejemi Ayao. Previously he was Business Development Director at Zero Motorcycles and worked in the Boston Consulting Group.

Q: Do you feel your are more innovative than disruptive?

A: I think a combination of both. We used innovation to change an industry which had not progressed for decades. Our company’s mission is to replace private cars and to do this we make use of technology and a new economic model which is disruptive compared with what there was in the past. The technology part is innovative: the economic model part is disruptive.

Q: Your revenues in 2015, the last figures available in Spain’s Mercantile Registery, were just 5.4 million euros. Are you not making a bit too much noise for such a small company?

A. We don’t talk publicly about our revenues. With regard to the figures you mention, I would say our rapid growth is what is generating a lot of buzz. Until a short while ago there were very few drivers with so-called VTC permits in Spain. When the sector was semi-deregulated new licences appeared and this has allowed our business in Spain to grow at anual rates of 400%. In any event, most of our business is outside Spain.

Q: You launched here in 2011 but had to leave immediately then return…

A: Yes, we launched the company in 2011. In 2012 we went to Latin America and basically gave up on Spain. Disruptive businesses like ours suffer in Europe as a result of the numerous barriers, both bureaucratic and competitive. Regulation avoids disruption taking place in many industries and what ends up happening is that companies born in Europe cannot progress or grow, and so the majority die off. And when they die off, those which were set up outside Europe, with regulatory models which are a bit more open, grew outside Europe. Then when they eventually came to Spain, they were big companies with muscle and capable of breaking into the European markets. The result is that the wealth is generated outside Europe, disruption ends up happening and it’s not Europe which is leading the way. In our own case, we were lucky to leave Spain and be able to grow in Latin America. We showed that our business model made sense and then returned to Spain. Cabify is a case in point of a Spanish firm which would have disappeared if it hadn’t left Spain.

Q: Uber, the taxi sector… Is the fact there are so many fronts open in this area not a risk for a young company?

A: Our growth strategy has not been based on creating a lot of buzz and taking advantage of that. But Uber’s is. Its strategy is aggressive, doing something whether it’s legal or not. That’s going to generate a lot of buzz, which will help us grow. We looked for a legal model and we only got caught up in this polemic when we were put in the same basket as others who don’t do things as well as we do. If you take a ride with Cabify you’ll see that 100% of the receipt is with a Spanish company. Obviously we pay taxes in Spain. Our mistake is that we have been discreet. It’s a business which works very well and complies with the regulations. There comes a time when you are accused of certain things…I would like to think that in the majority of cases this is due to a lack of information. But in others, like in the case of Podemos, we have explained everything to them and they continue to say we don’t pay taxes. That’s why we have taken legal action against them. We didn’t look for this situation, but we have found ourselves embroiled in these disputes. When our drivers are attacked, and their physical integrity is put at risk, or we are accused of things which are not the case, we have to defend ourselves.

Q: Why do you think the taxi sector is protected and others, like the hotel sector, is not?

A: There are a lot of people who invested – very badly, in my view – in a licence because at that moment they thought the investment was worth it. This is what the problem is: people paid 150.000 or 200.000 euros, are in debt, and want to defend their investment or consider it as their pension. It’s not about unfair competition. We pay a lot more taxes and we are not even allowed to drive in the taxi lane. So if this is the problem, we look for solutions, but there needs to be political will for this to happen.

Q: What do you propose?

A: The regulatory model needs to be changed. If we are saying that we want to get rid of private cars in cities, we need to offer an alternative. If people use their cars it’s because public transport isn’t good enough. The regulation has to look to the future and we can’t close ourselves off to change to protect an industry which is obsolete. In Latin America, where the problem of people having invested in licences didn’t exist, the regulatory process has been more open and without these kind of limitations. In Sao Paulo there were people with licences, perhaps not so expensive, but there were some. It was decided that, as the new model is for the use of a vehicle by minutes, the licences would no longer have to be associated to any vehicle 24 hours a day, but to the consumption by minutes. What the user wants is to get into a car and pay per minute used. So we created licences to adapt to that. In Sao Paulo and Montevideo we connected up with the town councils and sent them data on how many kilometres each vehicle did and in which neighbourhood. Depending on that information, you pay for a licence per hour of the day. It’s a very advanced system which would even allow for establishing prices based on each company’s market share to avoid monopoly situations.