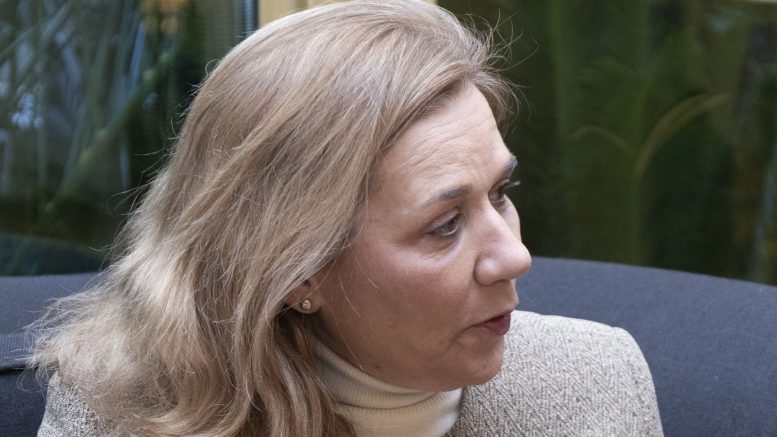 Maria Rotondo, member of Indra's Board of Directors

Mari Pinardo | “Loyalty shares, which confer additional voting rights to investors who have held shares for two years, strengthen the position of majority shareholders and produce a gap between their economic commitment and their voting power. They can make a takeover bid more difficult, reduce liquidity and the value of a company less attractive” says Maria Rotondo, co-director of the IE executive sustainability program.

Maria Rotondo also has several years of experience as a consultant and senior advisor in various institutions (Caceis Spain & Latam, Indra, IC-A, ie Exec Education, Headspring-Top Boards). In addition to this, she has 30 years of experience in Investment Banking within the area of Corporate Finance, Capital Markets and Investment Analysis. She is currently teaching investor relations at BME and capital markets at IC-A.

Due to the transposition of European regulations, the regulation of loyalty shares is about to happen in Spain. In France, for example, since the so-called Florange Law was passed, investors who have held shares for at least two years receive double the vote. To what extent would it be good to transpose a system like the French one?

We are talking about a European directive that has already been implemented in France and Italy. In France, it attracted a lot of attention because the adoption of loyalty shares was done as an opt out rule as opposed to an opt in one. Why would a government propose an opt out rule? It may be argued loyalty shares make a market more attractive and increase in value, because of its increased flexibility – there are additional options – and they could be  seen as a declaration of intent to promote long-term, more sustainable growth models, and to correct short-termism in the market in order to reduce volatility. On the other hand, family businesses that might be more sensitive to control issues could consider going public if their control is protected and therefore the option of loyalty shares could make sense and they could consider listing which increases the liquidity of the market as a whole. The fact that a market is seen as more attractive would reinforce its liquidity and increase its value, but, personally , I have no evidence that this is the case,  and we would have to analyse technical aspects such as the reduction in liquidity when capital is divided into two types of shares. It is not new either, given that in many markets there have been dual listings for years and listed companies with several types of shares. For example, in Italy, Telecom Italia has been listed for years with ordinary and savings shares, ordinary shares have voting rights and savings shares do not but are entitled to a higher dividend. Which do you think should be quoted at a higher price? For which would you pay more?

For the ones with a higher dividend?

No, historically the savings shares of Telecom Italia have been quoted at a discount of over 25% at some points in time. They are less liquid and liquidity is important, because when an investment fund or some investor wants to buy a sizeable number of shares, if the share is not liquid, that is, if there is not a significant volume of purchases and sales during the day, the price will tend to rise because there is “more money than paper”. When they want to buy, the price goes up, and when they want to sell, the price starts to go down… If a share has little liquidity, it may trade at a discount, because you have less flexibility to buy and sell. Furthermore, in stock markets, among institutional investors, there is a mantra that says, “equal rights” – the same rights for all shareholders – that is, all shareholders have the same information, at the same time, and the same economic and voting rights. For institutional investors and large funds it is like a rule of good corporate governance. Loyalty shares, which confer additional voting rights to investors who have held shares for two years, reinforce the position of majority shareholders and produce a gap or “de-coupling” between their economic commitment and their voting power. So you could get twice as many votes as your financial position after two years, and sell some of your shares while keeping the same voting power. Investors’ economic exposure is thus de-coupled from their voting rights. It seems to me that an opt in rule makes more sense than an opt out one. And perhaps some limitations should be imposed, in the sense that this is a decision that should be taken before a company goes public, or some other limitation that prevents this mechanism from being used for tactical reasons related to takeover bids, or defence actions… Because if majority shareholders are given more voting rights through loyalty shares, then a takeover bid may become more difficult, and if a company is less likely to be considered for a takeover bid, its shares may become less attractive.

Since you’re talking about takeover bids, let’s talk about mergers. When Brussels blocked the merger between Siemens and Alstom, both Germany and France started wondering whether these competition rules make sense in a single market. And they are wondering if they do not prevent competition with the giants that come from the United States or China.

Competition rules are meant to protect market dynamics, they are made with the final consumer and society as a whole in mind. It makes sense to have regulation and for regulatory approval to be needed in the case of operations that could alter the functioning of the market, as may be  the case in a monopoly or oligopoly situation, where price setting could be affected, for example. But according to my experience as an investment analyst, and in the world of corporate finance, approval periods are usually very long and may damage a company’s operations. Approval can take more than a year and, in the meantime, this can lead to loss of clients, employees etc. And if approval is not obtained the cost can be very high. I also believe that in certain capital-intensive sectors the size of market share is key, and how market share is measured has to be adapted accordingly. For example, the telecommunications sector is very  capital-intensive and increasingly so because network traffic keeps increasing, 20 or 30 euros out of every 100 euros that telecommunication companies earn may need to be reinvested in network infrastructure. I think there is no market in the world with more than 5 or 6 mobile network operators, and the usual number is three or four, at most. And the fact is that, in the USA for example,  AT&T and Verizon have had a market share of over 70% between them for years. In Europe, we have not achieved such economies of scale. And in telecommunications, the cost of building network infrastructure is the same whether that infrastructure is used by one or by 200, as in the case of a motorway. So bearing in mind the investments companies will have to make in order to continue operating, I don’t know how much consumers will benefit from the fact that consolidation is not allowed. In my view it is not a foregone conclusion that more operators will lead to more competition and lower prices. If they have to invest heavily in infrastructure, networks, etc. they will have to pass that cost on to the consumer…Perhaps it is better to have fewer.