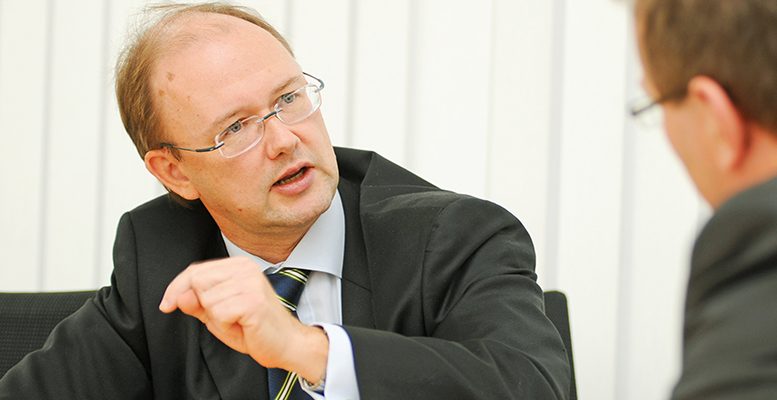 “Whatsmore, in the US, Europe and Japan we are seeing a demographic change. We need automation because we won’t have enough young people to handle the production. And yes, it’s true that jobs will be lost, but without automation and digitalisation we would not be able to feed a growing population, dress it, entertain it, provide health treatment…jobs will be lost and gained, just like over the last 100 years,” says Frank Maier, member of the executive board and in charge of R&D at Lenze.

Q: At the moment, Germany has some enviable figures. What is it doing right?

A: The boom is not new. If we analyse the statistics of Germany’s trade balance, we can see that this “all-time high,” a 29.1% surplus, recorded in 1988, a year before reached 28.7%, but in 1974 was already at 28.7%. I acknowledge that the last 10 years have been excellent ones for our economy. Don’t forget that a large part of what we import are raw materials. If they are cheap, we can improve our exports. Another successful element is that, as we lack our own raw materials, this has been a key focus over the last sixty years. We import raw materials and basic technologies and we integrate them into high-value systems like machines or cars. On the other hand, Germany has lost the production of consumer goods, like textiles and white goods. We have been able to compensate for this loss with the development and manufacturing of top-value goods. Add to that a large dose of enthusiam for innovation, perseverance and luck.

Q: What are your country’s big economic challenges?

A: For me, the main objective will be to guarantee that we have specialists for the whole of the technology sector. Our population is getting old. If on top of that the interest for technical professions were to fall, we would be gambling with Germany’s future as a technological nation. We have very few young people in mathematics, engineering, natural sciences and technology. It’s a challenge for everyone to offer more opportunities to provide more incentive for these careers. I will give you an example: last semester 20.000 students started in IT, of whom only 15.000 will finish their studies. At the same time, Bitkom is offering 60.000 jobs which as of today have still not been filled. Apart from that there is the demand for specialists on the part of medium-sized companies in the machinery sector. Hence our opening up to talent from outside. But it’s not easy.

Q: Another issue for the new Government to deal with is investments?

A: Yes, in infrastructures, particularly in digital infrastructures. Anyone who travels through Germany by car immediately realises that there is not always coverage. Investment is needed in LTE, then in generalised 5G mobile infrastructure, as well as in broad band connections. The need for ‘fibre to the home’ is recognised but it’s a slow process. Once we have both needs satisfied, talent and digital infrastructure, I won’t be worried at all about digitalisation. Our technology  is so good that Germany will be able to continue to work successfully.

Q: At what stage are we now in this digital revolution

A: For me, digitalisation  began with the invention of the transistor. Its capacity for being integrated in a microchip provided the base for the third industrial revolution, and then the fourth. For that reason, it’s not true to say we are at the start of digitalisation. It began a long time ago. But the technological development progresses increasingly quicker and a lot of new possibilities emerge. Hence the current sensation of revolution. All things digital have formed part of our lives for a long time. Think about the computer, in the CD player, playstations, email or Skype. And in the industry, the ERP, CRM, videoconferences etc. Whatsmore, it advances at different speeds. Faster in the US, followed by Asia and Europe, where the complex European data protection directives slow progress. That said, when it’s do with the so-called Industrial Internet or the Internet of Things, I am optimistic. While the US is a leader in Internet, Europe, and above all Germany, is the leader of the Internet of Things, the digital interconnection of daily objects (via radio devices) with Internet, which allows them to be identified and managed by other equipment.

Q: How much work will machines leave people?

A:  Automation began in the second industrial revolution, when electrical energy substituted the human workforce. We have been automating for the last 150 years, with innovations which are more and more efficient. Although the goal was always to increase productivity, today there is much more work in the world than there was then, as well as jobs in industry. During the German economic miracle we had 15 million jobs in production. Today’s it’s half that. On the other hand, if we used production methods today from 50 years ago, we would need 120 million workers just for production. In other words, the rise in productivity allows us to live better. Whatsmore, we will have to continue to hike productivity to satisfy the needs arising from the global increase in the population and the huge accumulated consumption needs in Asia, South America and Africa.

Q: So it’s all positive then?

A: The fact is that in the US, Europe and Japan we are facing a demographic change. We need automation because we won’t have enough young people to handle the production. And yes, it’s true that jobs will be lost, but without automation and digitalisation we would not be able to feed a growing population, dress it, entertain it, provide health treatment etc…Yes, jobs will be lost and gained, just like over the last 100 years. First there were coachmen, then chauffeurs and soon we will have self-drive cars. On the other hand, jobs arise because Internet does not physically move things. Whenever something has to be moved from A to B, we will need activation techniques: namely mechanical solutions.