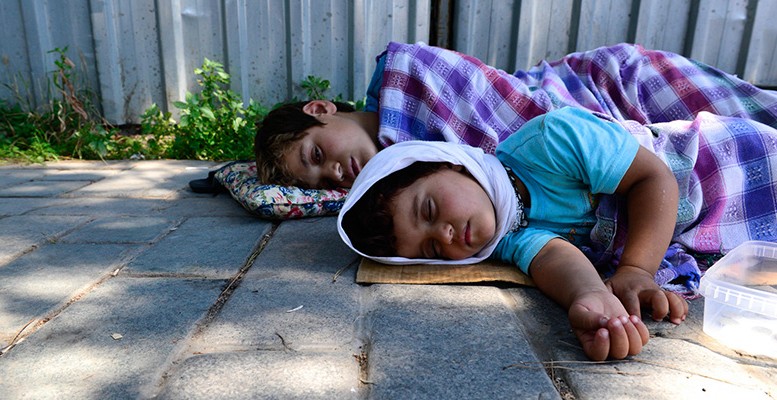 Nick Malkoutzis via Macropolis | An average of around 2,200 refugees and migrants have arrived on the shores of Greece’s eastern Aegean islands every day this year. Before being piled into rubber dinghies and other unsuitable vessels for the crossing, they purchase life vests from shops in Turkey.

A walk along the beaches where they land will tell you that many of these vests are fake: They look fine on the outside but inside they are stuffed with foam, which when wet will absorb water and drag the person wearing it down rather than help them float.

In some ways, the agreement the European Union made with Turkey in Brussels on Sunday is similar: On the surface it appears a deal that suits both sides but it has the potential to go badly wrong.

Turkey is the clear winner of the deal as it gets up to 3 billion euros in cash (with possibly more to come in the future), a pledge for visa liberalisation and the opening of EU accession chapters in return for preventing refugees and migrants from leaving its territory without permission, which – after all – was its legal obligation.

Nevertheless, the EU could benefit if Ankara keeps up its end of the bargain and stems the flow of people, which has put such a strain on resources and politics within many of member states.

The first country that would feel the effects of Turkey adopting a stricter approach to the human trafficking gangs transporting migrants and refugees would be Greece, which has seen around 730,000 arrivals so far this year, according to the UNHCR.

Being very familiar with Turkey’s changeable moods, Greece will not be taking it for granted that Sunday’s agreement with Ankara will be implemented. However, the Greek government appears to have been encouraged by two factors in the Brussels pact.

Firstly, there is only a commitment from the EU’s side to immediately open Chapter 17 of the accession process, which relates to economic and financial policies, and not any of the chapters that have been blocked by Cyprus. This means that for the time being there is no clash between the membership process and the delicately balanced reunification talks on Cyprus.

Also, Athens seems to have been encouraged by the fact that the liberalisation of the visa process for Turkish citizens, so they can travel freely in the Schengen Area, will be linked to Ankara fulfilling its readmission agreement with the EU.

According to what was agreed in Brussels, Turkey has to begin from June 2016 taking back migrants who are not allowed to stay in the EU. Only once Turkey has shown it is living up to its end of the bargain (the current percentage of migrants Turkey accepts as readmissions from Greece is miniscule) will the EU proceed with the lifting of the visa requirements for Turks. This is scheduled to take place in October 2016. There is also a commitment to monitor whether Ankara will keep up the pace of readmissions expected of it. Much of the details, though, are vague.

The concern for Greece is that Turkey will gradually lose its interest in abiding by the agreement made at the summit. There is no indication that Turkish President Recep Tayyip Erdogan is committed to pushing his country towards membership of the EU, nor that this is what the majority of Turks want. On this point, the Europeans have little, if any, leverage over Erdogan. His interest in the accession process could vanish, especially given the volatile situation caused by the heightened tension with the Kurds in his own country and the effects of the wars in Syria and Iraq, for which there appears no end in sight.

The visa liberalisation scheme and the offer of a cash boost to provide better conditions for more than 2.2 million refugees in Turkey may prove greater incentives but as long as Greece does not have the resources or willingness to be the EU’s border policeman and some countries in central, eastern and northern Europe display limited desire, or downright aversion, to accepting migrants or people seeking asylum, Erdogan will always have the upper hand in this tug of war with the Union.

The EU has to ask itself if it has entered a bargaining process in which it will always lose much more than it can gain. European leaders have decided to court Erdogan at an extremely sensitive and dangerous time for Turkish politics. They felt it necessary to stand with him ahead of the recent national elections despite the bloodshed and media clampdown in his country, thereby giving him an air of legitimacy and importance that he found useful.

This has set a very negative precedent, which could see the EU locked into tacitly, or even directly, supporting the Turkish leader no matter what. The recent shooting down of the Russian fighter jet, arrests of journalists that are not aligned with the government and ongoing police action in Kurdish areas underlines what a complicated situation the Europeans already find themselves in.

The circumstances require the kind of bold, prescient diplomacy that the EU just does not do. The Greek government underlined its own diplomatic immaturity by allowing critical remarks about Turkey, including a reference to it shooting down the Russian plane, to be posted on Prime Minister Alexis Tsipras’s Twitter feed.

The Greek version of the comments seemed an effort by the premier’s team to get their retaliation in at home before critics started expressing concerns about the summit deal. But when read in English, Tsipras’s attempt to show that he had been tough with Turkey looked out of place, even more so given that the Greek leader made the point about Turkish incursions into his country’s air space and the need for Ankara to do more to stop human traffickers at the news conference following his meeting with Prime Minister Ahmet Davutoglu in Ankara earlier in the month.

The apparently frivolous handling of such a serious issue by Tsipras and his team on Sunday added to the feeling that the European leaders may be in over their heads when it comes to negotiating with Turkey. Those who think they have secured a watertight agreement with Erdogan may be in for a nasty surprise. Events may prove that Sunday’s agreement is not fit for purpose, like the brightly-coloured life jackets sold in Turkey’s western coastal towns and cities.