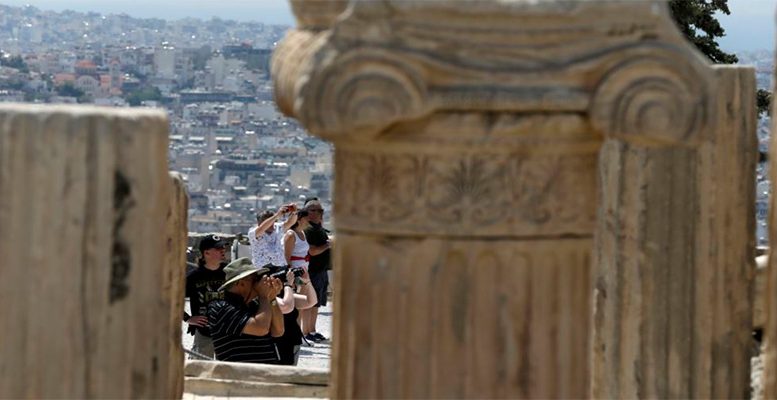 The July 2019 snap election was won by the centre-right New Democracy (ND) party with 39.9% of the votes, while the ruling leftist Syriza party gained 31.5%. Due to a 50 seat bonus attributable to the party winning most of the votes, ND is able to govern with an absolute majority (158 seats in the 300-member parliament). The government intends to increase economic growth by more business-friendly policies, such as cutting taxes, scaling back bureaucracy, and selling public assets.

Despite a recent agreement to resume talks, the conflict with Turkey over overlapping maritime boundaries in the Aegean See remains a major downside risk for the stability in the region and Greece ́s economic performance. Greece is firmly opposed to Turkey’s hydrocarbons exploration activities and military exercises in

the region. The dispute over exclusive economic zones in the Eastern Mediterranean involves other countries as well, such as Cyprus, Egypt, Israel and Libya. Tensions increased in summer 2020 by Turkish drilling surveys close to Greek islands and naval exercises near Cyprus, followed by joint military exercises in the same area by France, Italy, Cyprus and Greece. The EU backs Greece ́s position and has asked Turkey to abstain from unilateral actions and to resume talks, indirectly threatening to impose sanctions otherwise.

The economy has been hit hard, especially the tourism industry

The Greek government has reacted swiftly and strictly to the coronavirus pandemic from the start, and the infection ratio has been much lower than in most neighbouring states. After two years with annual growth rates close to 2%, Greece faces an economic contraction of more than 7% in 2020, due to comprehensive lockdown measures domestically and abroad, as well as due to the global recession. Private consumption and investments are expected to decrease 7% and 10% respectively, while exports are forecast to shrink 9.5% this year. Tourism (accounting for almost 27% of GDP) decreased 99% year-on-year in April and May, and there was no real rebound in the summer holiday season. Unemployment has substantially increased over the past couple of months, peaking at 18.3% in July 2020. While a modest economic recovery has started in Q3 of 2020, year-on-year quarterly growth rates are expected to remain negative until Q2 of 2021.

A rebound expected in 2021, but downside risks remain

Assuming the pandemic comes to a gradual end, a robust recovery of investments, private consumption and exports output should lead to an economic rebound of almost 7.5% in 2021. Unemployment is expected to decrease again next year. However, besides a resurge of the pandemic, any deterioration of the Greek-Turkish relationship could hurt economic performance, especially within the tourism sector (e.g. if Turkey again opens the border for refugees to move on to Greece, or in case of rising military tensions and clashes in the Aegean Sea).

The banking sector has become more resilient, but vulnerabilities remain

The banking sector as a whole is sufficiently capitalized, with a capital adequacy ratio of over 16%. However, the vulnerability of the financial sector in light of the coronavirus-related recession remains high. The banking sector only became profitable again in 2019, while real estate prices started to increase again just before

the coronavirus outbreak, benefitting the valuation of collateral. However, all this is likely to be reversed due to the pandemic. At the same time, non-performing loans (NPL) remain very high, accounting for more than 35% of total loans. On a positive note, banks have managed to reduce this ratio from more than 48% in early-2018, mainly by selling distressed assets and debt write-offs.

The recent rise in risks for the banking sector is partially mitigated by government policies that include interest rate subsidies, additional guarantees and loans to small and medium-sized companies.

Public debt remains very high but manageable for the time being

In order to support the ailing economy, the government has announced financial and fiscal measures amounting to about 14% of GDP, including loan guarantees, additional expenditures on health, cash transfers to households, various forms of support to companies and VAT rate reductions. Banks have allowed deferrals of principal payments on existing loans for hard-hit individuals until the end of September, and for businesses until the end of December 2020.

Part of these additional expenditures is funded by EU grants and loans. Greece is also eligible for various European Central Bank monetary support measures to deal with the pandemic, including the Pandemic Emergency Purchase Programme that refers to government bonds. Despite this external support, the pandemic-related spending and lower tax revenues will lead to a fiscal deficit of 7% of GDP in 2020. As a result, public debt will increase from 177% of GDP in 2019 to 190% of GDP in 2020, among the highest in the world. However, according to the European Commission (EC), the debt-service costs of the government are manageable in

2020 and 2021. The EC also points to the large cash reserves of the government (EUR 34 billion or approximately 19% of GDP) that provide an important buffer against possible liquidity shocks. Positive factors are currently the loose monetary policy of the ECB and globally low yields on government bonds. The high share of fixed interest rate loans (more than 90%) and the high average maturity of 21 years are additionally mitigating risks.

Foreign debt is very high but sustainable over the coming years

According to Macrobond, foreign debt will increase by 15% in 2020, to 253% of GDP. That said, the high share of official creditors and the euro system continue to keep the external debt-service ratio within manageable boundaries, thereby supporting the sustainability of the foreign debt. Without a negative shock, foreign debt is expected to decrease to about 240% of GDP in 2021.

The international competitiveness of Greece remains hampered by issues like property rights, skills of workforce, lack of competition and low innovation capability. Other factors include high taxes, restrictive labour regulations and limited availability of both loans for SMEs, as well as venture capital for start-ups. The weak competitiveness is also related to the use of the euro, implying an exchange rate that is far less related to national economic trends. As a result, the euro is overvalued by approximately 10%, implying that Greek exports are relatively expensive abroad.

The government seeks to boost national competitiveness. It has announced measures to cut red tape, raise the level of competition in the energy sector, and to clarify the rules for procurement procedures and other government-private sector interactions.

However, those ambitions currently face major setbacks due to the coronavirus pandemic.

Greece remains under the surveillance of the European Union. This surveillance includes assessments of economic, financial and government debt-related trends.

Athens concluded the ESM program in August 2018, without the option for a precautionary line of credit. However, the country has agreed with its creditors to continue implementing the agreed reforms under the program until 2022. In June 2020, the Eurozone finance ministers agreed that Greece was eligible for a EUR 748 million tranche since the Greek reform progress was considered sufficient. Once the pandemic is under control, the European Commission expects major privatization projects to continue