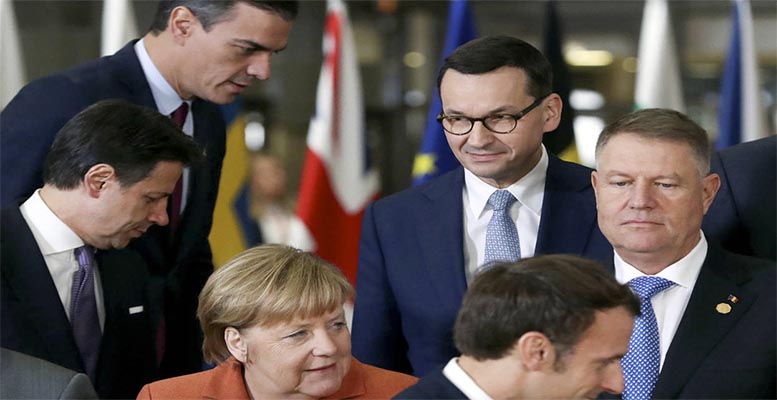 BofA Global Research | The Franco-German recovery fund initiative is a small positive surprise: EUR 500bn, joint EU issuance, allocated as grants. Caveats: it is too small in size to fix all problems, its exact design in allocation, repayment and timeline will be crucial. The political symbol could be strong, though, if the EU 27 can agree. The ECB may feel temporarily relieved now.

We needed to start somewhere

The Franco-German initiative for the European recovery fund today is a small but positive surprise to us. President Macron and Chancellor Merkel have proposed (joint) EU issuance for EUR500bn that would be distributed through grants (not loans) based on the relative damage to sectors and regions by the current COVID shock. We think matters for at least two reasons: i) there is an implicit political signal with Germany apparently willing to cross some red lines and do some creative thinking around the EU budget; ii) The political signal, towards more Europe, even if small, matters for redenomination risk.

Grants vs loans – this matters

That funds would get allocated to countries in form of grants rather than loans, ie not showing on individual countries’ debt ratio, is an important feature. It is also where the “innovation” in the German stance lies – so far the position was that EU budget instruments needed to be proportionately lighter in grants, heavier in loans, and of limited duration. So this proposal is a nod to a sort of fiscal transfer across the European space. The proposed size (c 4% of EU27 GDP) is relatively small, the allocation across EU member states and the repayment schedule will matter a lot for its effectiveness and the size of those fiscal transfers. If deployed well (ie most funds go to periphery countries) and repayment is shared as a function of GDP over a very long time, the instrument could be powerful beyond its political symbolism.

A decent start, with a long list of caveats

Yes, this proposal is a positive surprise. But it is, for now, a proposal. As part of the EU budget, it needs all EU member states to agree – including Northern member states who so far took issue with the idea of transfers, and Eastern member states who may want to get a big share of the available resource for themselves. A Franco-German agreement may still be a necessary ingredient, but it is not sufficient to guarantee its implementation. So focus now on the European Commission proposal on 27 May (supposedly building on today’s), negotiations on details, and ratification processes thereafter. We are not done.

Time and speed are of the essence

The market reaction to the proposal was immediate and very positive. In fact, Macron and Merkel’s initiative, only announced this morning, came at a crucial time. Since the German Constitutional Court ruling, the ECB had to increase its monthly PEPP purchases from c EUR 20bn per week to EUR 30bn – although many argued markets were relatively “calm”, they may have been so because of aggressive ECB intervention. We need the recovery fund as soon as possible and, more importantly, we need the fund to deploy those resources in a short time span. EUR 500bn is small, but it could look tiny if we need to wait very long for it to be deployed or if the money is spent over several years. And we still need a backstop for the very significant funding needs throughout 2020-2021. We still run the risk that even a decent policy response from today’s perspective might ultimately go in vain if it comes when too much economic damage is done.