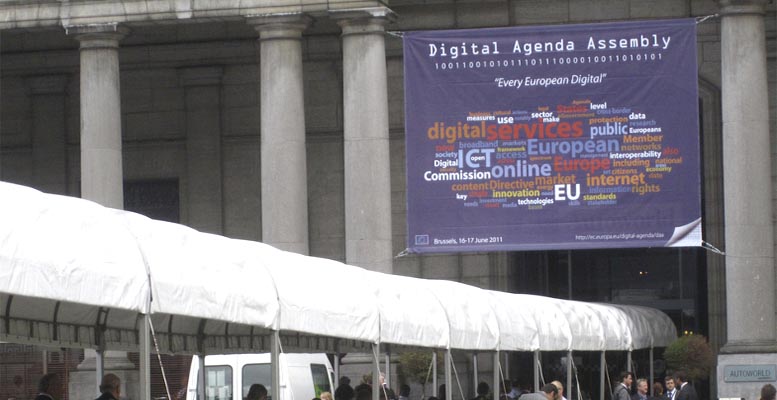 In July, the EU scaled back digital transformation funding by 18 percent from €8.2 billion to €6.7 billion

European Views | As much of Europe undertakes renewed lockdowns in an effort to curb the spread of the coronavirus, the pressure is on EU members to make sure their economies don’t completely collapse under the weight of the pandemic. This is especially true in Spain, given the Spanish economy is one of those most affected by the coronavirus crisis. With popular discontent rising, Spain is counting on the €140 billion allotted to Madrid by the EU as part of the €750 billion recovery fund to rebuild after the economic trauma inflicted by this crisis.

In October, Spain and other EU members submitted their national recovery plans to the European Commission, detailing how exactly they intend to spend their allocated money. In keeping with the Commission’s stated priorities, these plans largely focus on the green transition, education, and research, as well as digitalisation. The latter is of particular importance after the European lockdowns earlier this year laid bare the stark digital divide among the EU27, as millions were forced to shift their work, education, and even social lives online.

Uneven progress in the European south

While this shift has helped to speed up digitalisation in Europe by up to three years overall, progress is not evenly shared across the EU, and southern European member states as a whole are mulling how to catch up to more digitally developed northern counterparts. Against that backdrop, Spanish premier Pedro Sánchez intends to spend 33 percent of a first €72 billion grant to modernize Spain’s economy and create 800,000 new jobs over the next three years, with the digital transformation as a priority area. Targets of that spending include providing education and training as well as infrastructure development, particularly in rural areas.

Spain is already a strong overall performer on the EU’s Digital Economy and Society Index (DESI), which tracks digital performance and improvements in digital competitiveness across member states according to connectivity, the use of internet services, technology integration, and digital public services, but a number of EU governments are now planning similar steps to tackle the digital divide clearly illustrated by DESI.

While the index ranks Finland and Sweden first and second in terms of both citizens’ internet use and in digital skills, southern European economies including Italy, Bulgaria, and Romania find themselves lagging in relation to their EU peers. As Italian economists such as former IMF director Carlo Cottarelli make clear, digital reforms need to figure prominently in how Rome deploys the €81 billion in grants and €127 billion in loans it is due to receive from Brussels.

Even Germany, Europe’s economic engine, has not realized its full potential in all matters digital, despite Berlin’s emphasis on innovation. Angela Merkel’s government has become increasingly self-aware of its digital shortfalls, and launched a digital strategy in 2018 designed to improve digital competence, infrastructure and innovation, with a particular focus on AI. Even though Germany’s digital progress has been criticized for being too slow, DESI shows that Germany’s investments have allowed the country to sharply increase overall connectivity and match Finland in 2020, while also breaking from the pack to outpace the EU average in terms of human capital in the digital sphere.

Playing catch up with huge payoffs

For years, observers have warned how the adverse effects of the digital divide were threatening to further undermine confidence in the European project at a time when both Brexit and populism have already taken a toll on its foundations.Before the Covid-19 crisis, Brussels appeared at a loss in its efforts to tackle the problem. A 2019 report by the EU Parliament’s internal research service (EPRS) estimated there was “a shortfall of €155 billion, compared to the total €500 billion investment needed to meet the Commission’s 2025 internet connectivity objectives for ensuring that Europe takes a leading global role in the deployment of 5G services.” The same report warned of an annual €10 billion gap in AI investment between the EU and competing economies.

Decisions made during the first wave of the coronavirus pandemic provide examples of how such gaps come about. In July, the EU scaled back digital transformation funding by 18 percent from €8.2 billion to €6.7 billion, at a time when the global race for the “new digital economy” based on 5G wireless technology and optic fibre is accelerating. Global tech giants like the USA and China already have a head start in these areas, and Europe can ill afford to miss out given their importance for the bloc’s global competitiveness.

Furthermore, a European single market with an even distribution of digital competencies and resources in both northern and southern EU member states will almost assuredly see economic growth shift into overdrive. In 2017, the EPRS estimated the Digital Single Market, once properly implemented, could provide a boost of €415 billion to the EU’s collective GDP – per year – and create 223,00 new jobs as the benefits of 5G, AI, and other digital innovations generate positive knock-on effects across the bloc.

As Europe stares down the second wave of Covid-19, the new lockdowns are another reminder of the need for urgency. With the availability of unprecedented pandemic recovery funding, EU governments need to make sure a significant slice of their recovery funds are spent on solidifying the foundations of the digital economy at a time of sweeping economic transformation. Not only will this increase the resilience of European countries against future shocks, but it will strengthen the EU as a whole within a rapidly shifting global economy.