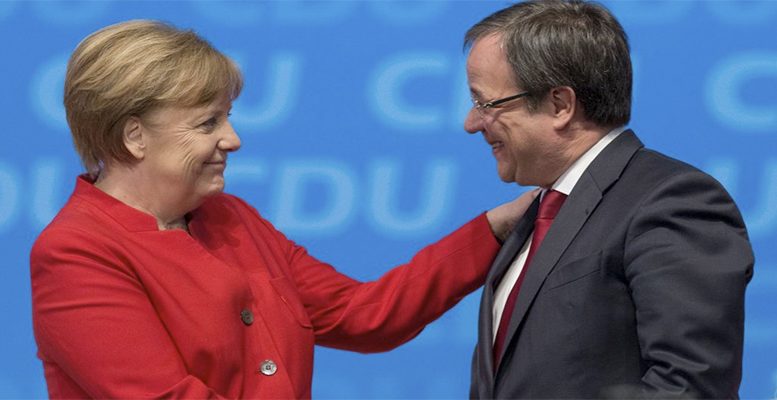 German's chancellor Angela Merkel with her successor as CDU's leadership

Lidia Conde | Over the weekend in Germany, the CDU elected Angela Merkel’s replacement as head of the party. They bet on continuity with the election of the moderate Armin Laschet who defeated Friedrich Mertz, Merkel’s old rival, by 521 to 466 votes at the party’s convention. Although the vote has yet to be corroborated, both candidates consider the result to be valid and it will be ratified on January 22nd.

For the first time in Germany’s history, the person who occupies the chancellor’s office is leaving voluntarily. And she does so with the respect and recognition of her opponents and successors, both in the CDU and in the government.

Angela Merkel is leaving. The researcher and doctor of physics from the University of Leipzig, the daughter of the Protestant priest. Then the politician, who came from the DDR and grew up with the rigours of the communist regime. Helmut Kohl’s minister and the Christian Democratic chancellor between 1982 and 1998 who reunified Germany and brought in the euro. Merkel did not enter politics until the fall of the Wall, in November 1989, and was elected president of the Christian Democratic Union (CDU) in 2000. Married to a university professor of chemistry, the chancellor is a pragmatic scientist who carefully weighs the pros and cons, but acts decisively once a decision has been made. She governs in a factual and unpretentious manner. Almost with modesty. At the present time, she impresses with the contrast between her minimalist and consensual style and the wild, populist Trumpism. It impresses both in content (labelled as social democrat because of its spirit of solidarity in Europe: “Germany can’t do well if Europe doesn’t do well”) and in form: discreet, not at all pompous or grandiloquent. With her Merkelian motto, “we will succeed,” she managed the financial crisis, the refugee crisis and now the health crisis.

While in the US, UK, France, Italy, or Spain movements against established politics have emerged with a common message – us versus them – in Germany most people adhere to the democratic consensus. But isn’t there also a sense of disappointment in this country with regard to political leaders? Yes, Germany also has a problem with inequality and solidarity. Welfare, health and education are not the same for everyone here either. In this country, social promotion between generations is very difficult because it is still very much linked to family origins. For example, the strong selection according to marks obtained for access from primary school to higher levels favours children who are better prepared due to their family and personal circumstances. This fact is cushioned in part by the important relevance of dual vocational training, which is well recognised in the private economy. Nevertheless, many people lag behind, with the resulting inequality a breeding ground for parallel worlds, assisted by populist media which lie unashamedly. And the coronavirus is also contributing to this political disappointment.

For twelve of the 16 years that Merkel has governed there has been a grand coalition formed by the Christian Democrats (CDU) and the Social Democrats (SPD). A way of governing that reflects the great social consensus that distinguishes Germany and that explains, in part, its success in political and economic management. The Vice-Chancellor and Minister of Finance, is Olaf Scholz, a Social Democrat who respectfully praises Merkel for her political work and at the same time is the SPD candidate to replace the Christian Democrat in 2021.

So what is left for Merkel to do until autumn? The pandemic is the challenge of the 21st century. The Chancellor expressed it this way in her last New Year’s Eve speech. The epidemic will continue to strike. The Chancellor’s response could not be anything other than: “We will succeed.”

According to Daniel Brössler of the Süddeutsche Zeitung, Europe’s challenge is to defend the Union despite the different interests and opinions, with the aim of competing in the global systems struggle. In 2020, Germany responded consistently during its European Council presidency, with an emergency budget in the face of the serious crisis. In 2021, it will probably take on more responsibility for the consequences of the epidemic, including the economic ones. And the more complicated the situation in Germany, the more difficult it will be to show solidarity. At the same time, the EU will expect more from Germany. Macron too. And Biden, of course, after the disaster of Trumpism.

The description of the next chancellor was just made by Ralph Brinkhaus, head of the parliamentary group of the Christian Democratic Union:

“A politician who prepares the country for the future. A chancellor who unites. Probably the majority is not aware of the importance that Germany has for the union of Europe. Without Angela’s Merkel’s patience and her role as a moderator, the EU summit in December would have been very difficult. The politician will need to be inclusive, also accepted by those who do not vote for him.”