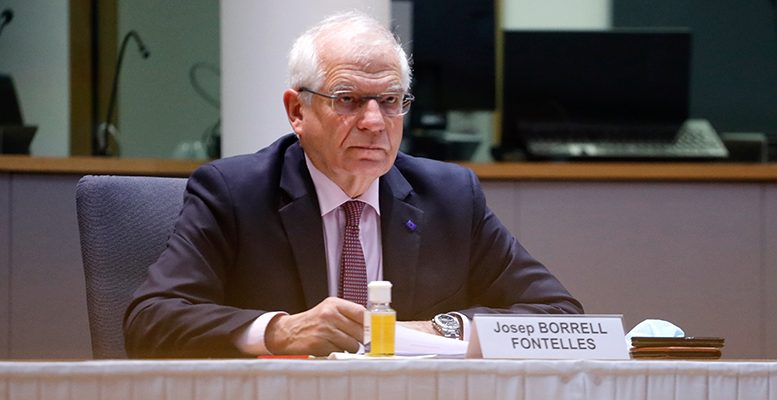 European Views | With EU-Russia relations at rock bottom following the arrest of dissident politician Alexei Navalny, a vicious crackdown on protesters, and the expulsion of several EU diplomats from Russia, imposing sanctions on the country should be a no-brainer for Brussels. Indeed, the Kremlin’s chronic flouting of international rules and norms, particularly as regards human rights, presents a fitting opportunity to put the EU’s newly minted Magnitsky-style sanctions regime to good use for the first time.

Instead, some European politicians appear not to have grasped how the bloc’s new sanctions framework should be deployed. This was illustrated most recently by a letter some MEPs drafted calling for flexing the Magnitsky muscles on corruption grounds on Israeli businessman Dan Gertler for his dealings in the DRC. The only snag, however, is that the EU’s new sanctions programme only applies to grave human rights violations. Indeed, the European “Magnitsky Act” was a long overdue piece of legislation which carries the potential to enact real change, but only if used responsibly on the appropriate targets—of which Moscow alone has provided plenty.

Kremlin and Brussels at boiling point

The latest downturn in relations between Russia and the West began last August, when opposition leader Navalny collapsed onboard a flight. The EU agreed to impose sanctions on six Russian officials in the wake of French, German and Swedish labs’ determination that Navalny had been poisoned with the military-grade nerve agent Novichok. After recovering from his brush with death in a German hospital, Navalny returned to Moscow for the first time since the poisoning last month, where he was summarily arrested on arrival on spurious charges.

Navalny’s instantaneous arrest alone was enough to put significant pressure on top EU diplomat Josep Borrell to ramp up sanctions, but instead the Spaniard decided to become the first EU foreign policy chief to visit Russia since 2017. Borrell cast his visit as an opportunity to iron out the issue in person—but instead handed the Kremlin a golden opportunity to ensnare him in “a highly choreographed trap”. Putin’s regime thumbed its nose at the EU by expelling diplomats from Germany, Poland and Sweden over alleged participation in protests against Navalny’s incarceration—a move which Borrell found out about on Twitter in the middle of his visit. Russia then heaped additional insult on injury by overshadowing Borrell’s diplomatic initiative with further charges against Navalny while the diplomat was in town, exhibiting the prisoner in a glass cage at his trial.

Borrell, who had already faced criticism for not cancelling the visit as anti-Putin protests erupted across Russia, has seen his star wane still further following his embarrassing performance in Moscow, and cries for his resignation are unsurprisingly multiplying. Given that reports of thousands of Russians being arbitrarily arrested and thrown into overcrowded, filthy prisons have also multiplied in the wake of Borrell’s Moscow meltdown, the EU should have little choice but to cut the teeth of its new sanctions regime on those responsible for the ongoing crackdown in Russia.

Which application for the EU’s new sanctions regime?

With tens of thousands of Russians braving the cold and brutal beatings by riot police to stand up against injustice and cronyism, it’s vital that Europe shows solidarity with those facing Putin’s persecution by putting the bloc’s fresh-out-of-the-box sanctions framework to its intended use. It’s troubling, then, that a number of MEPs are focused not on sanctioning Putin’s inner circle, but on trying to warp the sanctions regime as it was passed in December to target individuals who do not fit within its purview.

Specifically, a number of MEPs have written to Borrell asking for sanctions on the Israeli billionaire Dan Gertler, a prominent figure in the Congolese mining industry who was close to former DRC president Joseph Kabila. For one thing, it’s highly debatable whether EU sanctions against Gertler would accomplish anything, considering that Kabila finally stepped down after a 17-year term in 2019 and given that Gertler is already complying with strict requirements in order to maintain what amounts to a year-long probation from US Treasury sanctions.

Leaving aside the questionable upside of singling out Gertler, there’s the more serious problem that pushing for European sanctions against him in the current context risks discrediting the EU’s sanctions regime while it’s still in its infancy. From the beginning, the EU sanctions framework was designed to target gross human rights violations around the world, a category made up of egregious acts such as genocide or human trafficking, rather than the corruption allegations levelled at Gertler.

Changing the rules of the game before the sanctions framework has even been put to use would send the message that the EU can’t think of a single individual or entity worldwide who has committed the serious human rights abuses for which the sanctions scheme was intended. This would be implausible at any time. It’s particularly so at the moment, when every continent and region seems to be offering up appalling examples of disregard for human dignity: from the lethal force being used against those pushing back against Myanmar’s recent coup, to a surge in violence in long-suffering Syria, to forced disappearance and torture in Maduro’s Venezuela.

Any of these crises would offer suitable targets to inaugurate the EU’s new human rights sanctions framework, but the carefully-choreographed humiliation which Moscow inflicted on Borrell—and by extension, the EU—earlier this month should earn Putin’s regime the honour of being first. In recent months, the Kremlin has increasingly acted with impunity—expelling EU diplomats, viciously beating peaceful protesters and going after journalists with particular fervour, and carrying out a show trial to imprison Navalny for years. Navalny is being held in the same notorious prison where Sergei Magnitsky died—there could be no better first use of the EU’s Magnitsky-inspired sanctions than to put pressure on the regime which inspired them.