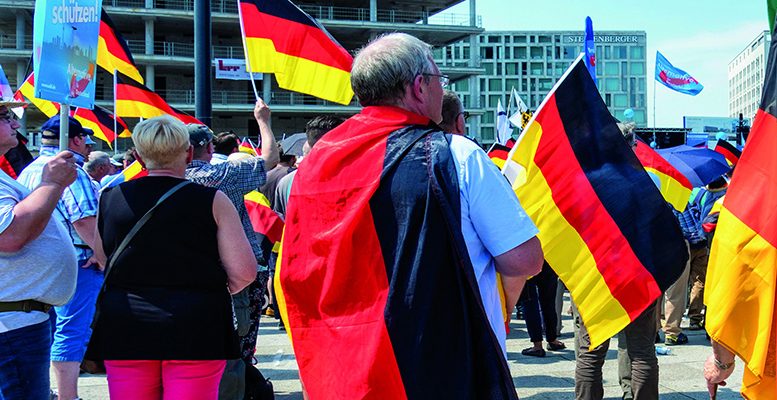 Thomas O. Falk  (European Views) | The elections in the German states of Saxony, Brandenburg and Thuringia were the latest success stories of Germany’s far-right party, the AfD. Moreover, the question amongst politicians remains: how to deal with a party, that seemingly overcomes a long-standing law in German politics: there is no life on the CDU’s right.

Despite Germany’s history, the country has had the occasional guest appearance of right-wing extremist groups in parliament. The Republicans, DVU or the NPD, all attempted to become part of the political discourse. They failed miserably. Daily political life exposed their inadequacies almost immediately. The AfD has altered this track record.

When the AfD was founded in 2013, it was considered an alternative for voters who felt alienated by Chancellor Merkel’s dogmatic way of policymaking.

Economic liberalism and above all by the fight against the Euro were on top of the party’s agenda. The potential was omnipresent, had the CDU under Merkel left centre-right and transformed into a centre-left party. With a rise in popularity, the party gained traction amongst rather dubious individuals also. As a result, the party’s founder, Professor Lucke, lost a power struggle with the populist right within his party in 2015. Paradigm shifts away from Euro-scepticism and Greece bailouts towards integration, Islam and refugees followed.

With unexpected success – despite having moved even further to the right since its foundation. However, the increasing radicalisation of the party and its positions has not been a detriment. Quite the contrary. In 2014, for the first time, the AFD succeeded in becoming a member of a supraregional parliament in the European elections.

Since then, the AfD has managed to enter all sixteen state parliament and established itself on the federal level also; becoming the largest opposition party in the Bundestagswahl of 2017 with 12.6%. Before the election success in east Germany, the party reached 11% at the European Elections.

The party’s gains since 2013 have been attributed to the mobilisation of former non-voters as well as protest voters, disappointed and disenfranchised by governing parties, particularly CDU and FDP as well as, to a lesser extent, the SPD and The Left. In recent elections, however, political scientists have observed the emergence of regular voters, who identify themselves with the AfD’s ideology of refugee immigration being a danger for the cultural homogeneity of society.

However, the AfD remains a schizophrenic party. Classical Conservativism, economic-liberalism and Christian-fundamentalist forces and the one side, mainly located in western Germany as well as on the federal level, which is being supplemented by nationalism, homophobic, anti-feminist, anti-Semitic and historical revisionist positions, as well as the occasional Neo-Nazism support – mainly, but not limited to, east Germany.

Particularly the east German AfD has been infiltrated by extremism. Here, its members openly fraternise with right-wing extremist groups and neo-Nazis. The latest example is Brandenburg’s AfD chair Andreas Kalbitz, who, in the past, had been cultivating memberships in neo-Nazi groups. Not a stigma in the AfD, nor east Germany. One week ago, he led the AfD into the Brandenburg state parliament.

Nevertheless, the extreme right’s poster child remains Thuringia’s Björn Höcke. Höcke has made a habit of making statements linked to Neo-Nazism and is known for his proclivity play down Germany’s role in World War II – to put it mildly. It has gone so far that other party members have tried to expel Höcke. With no success. Two days ago, he obtained the highest voting increase in the history of Thuringia and is set to become a critical voice on the federal level. Kalbitz as well as Höcke are leading figures within the party and represent a group named “Der Flügel” (The Wing). It accounts for 40% of all AfD members in east Germany.

The east Germany election results have raised the question of how much longer the AfD is willing to be an opposition and protest party. So far, the political dictum for all German parties has been to isolate the AfD. However, for the AfD to become a conceivable option for CDU and SPD,  the extreme elements within need to transform or disappear. The status quo nor the recent success indicate that the AfD is seeking to transform anytime soon.

Historically, newly founded parties only survived if they succeeded in repelling their radical elements or keeping them at a microscopic level.

At the beginning of the 1990s, the Greens had former members of communist splinter groups in their party. As a result, other parties chastised the Green and were unwilling even to consider cooperation. Over the years, this influence was gradually marginalised. It allowed the Greens to enter a coalition with the SPD in 1998. The Greens had emancipated themselves and arrived, at the time, at the apogee of their power.

The SED, which is now The Left, conducted a similar transformation. A Communist platform in the early phase, which was classified as extremist by the constitutional protection, has lost its influence. Although individual members continue to maintain contact with anti-constitutional groups in the opinion of Germany’s intelligence service, they are not the mainstream of a party long since arrived in Germany and has held government positions on a state level.

However, there is an essential distinction between these two examples and today’s AfD: ideology. Due to its history, Germany had almost been impervious to right-wing rhetoric and even conservative elements can deliberately be interpreted as 1940s propaganda. Meanwhile, the extreme left and the idea of a Marxist Utopia, has always had its market.

While an AfD coalition with neo-Nazi elements is rightfully out of the question, even a robust right-leaning conservative approach may be insufficient for the party to redeem itself.

Which raises the question: Will there ever be a future for the party besides an opposition force?

The answer lies in the other parties’ modus operandi. If the CDU does not reverse its course once Merkel ceased to be chancellor and if a coalition with the Greens is suddenly en vogue due to the climate hysteria, the chances of an AfD becoming stronger than the major parties in east Germany is conceivable. However, in a parliamentary system based on majorities, the AfD would face the same conundrum again: finding a partner.

On the federal level, the party is likely to increase its support as well, but conceivable never to the extent of its eastern branch – unless it says au revoir to its radical elements and becomes a viable alternative for conservatives and former CDU voters.

Until then the AfD will remain a party with strong voter support but out of power. Moreover, while this paradigm shift is unlikely to occur while the party continuous to receive this much support, Germany will face a political Groundhog Day at every election: major parties lose support, the AfD gains. Outrage. Calls for a new strategy against the AfD. Repeat.