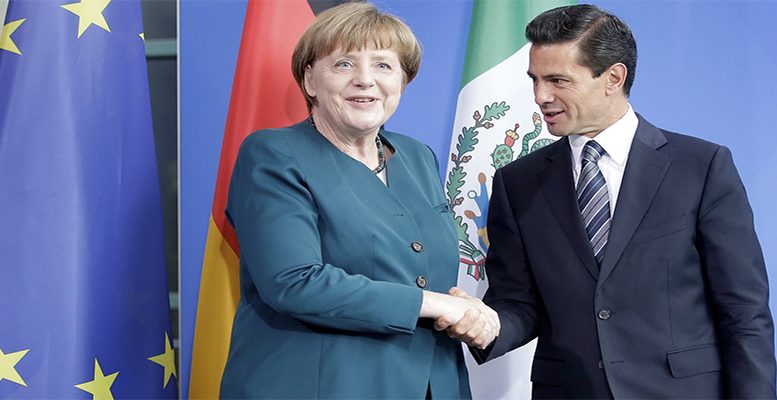 Emmanuel Gomez Farias Mata and Ivan Farias Pelcastre | The election of US President Donald Trump in November 2016 brought political and economic uncertainty to the world. Upon being elected, Trump announced radical changes to US domestic and foreign policies, aimed at delivering a government that puts “America First.”

This populist and isolationist approach led political commentators on both sides of the Atlantic to argue that the United States had abandoned its position at the forefront of global politics. Those same commentators quickly turned their heads to Germany as the country that can — and seems willing to — lead the industrialized, liberal democracies into the 21st century, and pronounced German Chancellor Angela Merkel as the new “leader of the free world.”

Germany and Merkel have taken upon their new roles enthusiastically. On May 28, at an election rally in Munich, Merkel stated: “The times in which we could completely depend on others are, to a certain extent, over.” Amid Trump’s election in the US and Brexit in Britain, she said: “We Europeans truly have to take our fate into our own hands.” In her view, Europe and the rest of the world can no longer count on the US or the UK as they used to in the pre-Trump and pre-Brexit era. For Merkel, the transatlantic alliances are no longer reliable relationships upon which to build common prosperity and security.

This assessment, however, does not come as a surprise to anyone who has been following the events unfolding in the US and Britain. What is worth noting instead is that Merkel’s vision for Germany and the European Union is not constrained to the continent.

Trips to Argentina and Mexico

Having regained its position as the political and economic power of Europe following the devastation of two world wars, Germany is no stranger to economic and political uncertainty. To address it, ever since the end of World War II, the German government has been busy advocating for the creation of free-trade zones, pushing for the opening of domestic and global markets, and promoting trust among countries both inside and outside Europe. Hence, in the face of uncertainty caused by a US retreat from global affairs, Germany has been using its experience and stronger global leadership to fill the empty seat that Washington left behind in Latin America, where it had traditionally held its strongest influence.

From June 7, Merkel has visited Argentina and Mexico to foster Germany’s links with Latin America. Officially, as per Deutsche Welle, “Merkel’s stops in Argentina and then Mexico were simply [because they are] the last countries left on the list to visit prior to the G20 summit,” which is set to be held on July 7-8 in Hamburg. Unofficially, Merkel’s visit to Latin America was partly aimed at exploring and establishing new global alliances that are not built around the US.

In Argentina, Merkel met with President Mauricio Macri to discuss trade and climate change issues, including the expected completion of a free-trade agreement between the EU and Mercosur, and the social and cultural links between Germany and the Jewish community in Argentina — the largest of its kind in Latin America. In Mexico, Merkel talked about trade and cultural issues, including the upgrading of the EU-Mexico free-trade agreement, and the closure of the Year of Germany in Mexico and the start of the Year of Mexico in Germany, which is a two-year bilateral initiative aimed at promoting better mutual knowledge and understanding between their peoples and cultures.

As German Ambassador to Mexico Viktor Elbling suggested, however, “the visit is in part meant to demonstrate his nation’s leadership on the world stage.” Argentina and Mexico are not just important trading partners for Germany, but also important political players in Latin America that have been long dissatisfied with US leadership in the region, and who would likely welcome and support power shifts in the global arena — away from the Trump administration’s protectionism and toward a more open global marketplace centered in Germany and the EU. As German Secretary of State for Tourism Iris Gleicke recently stated in her meeting with her Mexican counterpart, Enrique de la Madrid Cordero, Berlin is convinced that “open markets and reliable trade conditions rather than protectionism are the right approach.” Over the past few months, similar statements have been made repeatedly at meetings between high-level German and Mexican government officials, including Merkel herself.

Germany and Mexico have links that go beyond their common criticism of Trump’s protectionist policies. Both countries have expressed their commitment to strengthening and diversifying their bilateral economic, cultural and social links, and according to Gleicke, German-Mexican relations have developed “very positively [and already] offer companies in both countries enormous potential” and opportunities. Mexico’s appeal to Germany seems then to be momentous, not momentary.

Governments and firms in Germany and the rest of the EU consider that Mexico is on track to become an even more attractive country for foreign investment. In their view, Mexico has a privileged geographical position and a strong development model, which makes it a key player in the North American Free Trade Agreement (NAFTA) and the nascent Pacific Alliance — even at a time when the former has been heavily criticized by the Trump administration.

Mexico has also grown steadily as a market and country for investment. Numerous domestic policies and programs, including the liberalization of the Mexican energy sector, have increased both German and European interest in conducting or expanding business in the country. Likewise, sustained growth in Mexico’s manufacturing industry has made it a remarkable base for operations and a destination for producing and buying German products produced by and for Latin America. According to officials at the German Ministry of Economy and Energy, these conditions have made Mexico more attractive to German and European investors — even over other large Latin American countries such as Brazil and Argentina.

German investors have insisted, however, that Mexico must take further steps to continue, expand and enhance its trade initiatives and development programs. These notably include those related to the improvement of infrastructure, the further opening of its domestic market, and the provision of conditions of full transparency for foreign investors. These remarks strengthen previous calls, such as those made in 2016, for a swift and successful conclusion to ongoing negotiations for an updated free-trade agreement between the EU and Mexico.

Currently, around 80% of Mexico’s foreign trade is conducted with other NAFTA countries. Merkel and other German high-level government officials consider that a new EU-Mexico agreement might open up opportunities “to get the country involved in the global industrial scene,” not just the North American one. The economic opportunities for Mexico from a closer relationship with Germany are clear and evident.

Merkel is on the road

To Germany, however, the greatest gains to be made are political. Merkel’s visit to Argentina and Mexico has been described as a “display of Germany’s political muscle right in the face of Donald Trump,” just weeks before he attends the G20 summit. The timing of the visit — and the expressions of solidarity and understanding with Latin America, especially Mexico — also appears to be aimed at expressing the serious disagreements that exist between Germany and the EU with the Trump administration.

Germany’s offer of a helping hand to Mexico and Argentina signals the emergence of a closer economic relationship between Europe and Latin America that has the potential of replacing the not-so-benign influence of the US over the region. In exchange, it is likely that Latin American states will be expected to offer their support to Germany and the EU to make changes to the formerly US-led international political system.

So, should Latin America applaud or be suspicious of the actions and intentions of the great European power? While only time will tell, it is clear that Angela Merkel is on the road to becoming “the new leader of the free world.” Clearly, Mexico and Argentina are two worthy stops to make.