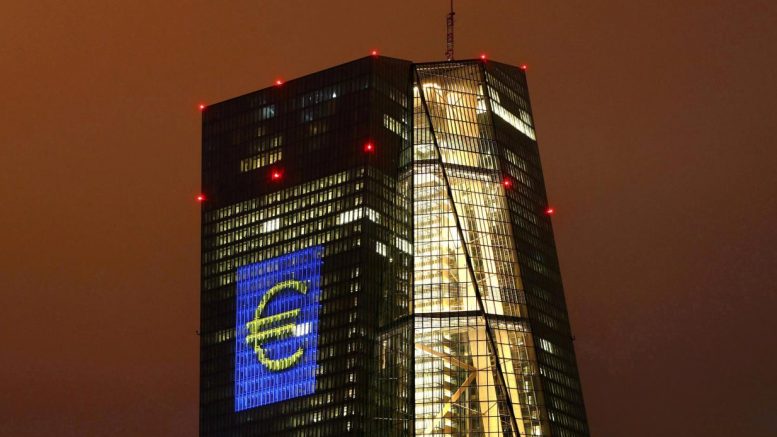 The ECB will keep all options open until the next meeting

BS Markets | Spanish banks’ recourse to Eurosystem financing stood at almost 170 billion euros in May. This is the second highest in the Eurozone, second only to Italy, whose needs amount to around 250 billion euros. In both cases these volumes represent  15% of GDP and between 6 and 7% of the size of the sector.

The Bank of Spain, in an analytical article by Ricardo Gimeno and Ana Del Río, has signaled that “the recourse to Eurosystem financing by Spanish banks is relatively high, both in terms of GDP and its weight in the balance of the banking system, even if the factors which explain the evolution of this source of financing has varied significantly over recent years”.

As it explains, the fall in financing of Spanish banks by the ECB was interrupted in 2014 by a new phase of stimuli. Meanwhile the current monetary injections almost all originate in the TLTRO II operations in 2016 and 2017, which will come due in June, September or December 2020 or March 2021, depending on the auction.

These monetary injections have allowed earlier loans to be refinanced, or even increased, under very favorable conditions, with low interest rates and extended repayment periods.

The Bank of Spain states that “The use of the TLTRO has offered major advantages to countries like Spain, where entities have higher financing costs.”

In this sense, Gimeno and Del Río highlight that, the higher weight which Eurosystem financing maintains in Spain reflects both the possibility that monetary policy has offered for refinancing earlier loans and the major relative advantages in terms of cost.

The article also points out that the importance of Eurosystem financing has been accompanied “substantial” changes in the size and comoposition of the banks’ balances, given that since 2012 there has been a general decline in assets and liabilities, albeit with different velocities in different countries.

Spain stands out for the size of its adjustment produced in a context of pronounced deleveraging in the private sector and restructuring and sanitizing of the credit entities.

In the case of liabilities, the most relevant fact is the fall, in both absolute and relative terms, of the funds captured in wholesale markets. In fact, Spanish banks stand out for their little importance in interbank financing, where they amounted to only 11% in first quarter 2018, as opposed to 25% in France or 15% in Germany or Italy.

The provision of liquidity in the banking system forms part of the monetary policy tools to achieve the objective of the ECB to maintain medium term price stability around 2%. The international financial crisis and sovereign debt in the Eurozone required successive adaptations to the operational frame

Confronted by the blockage in interbank markets, the ECB had to ensure adequate provision and distribution of liquidity, assuming a large part of intermediation function previously exercised by the market itself. The prolongation of the crisis and the appearance of tensions in sovereign debt markets forced the ECB to combat the risks to refinancing entities and the divergence in financing conditions between countries.

In total, Eurosystem financing of Eurozone banks through monetary policy operations reached 760 billion euros in May 2018. This does not include either the portfolio of shares issued by credit entities and bought by the ECB through the covered bonds programme, nor the the emergency financing (ELA), which in certain times was relevant for some banking systems, and on which the Greek banking system still depends.