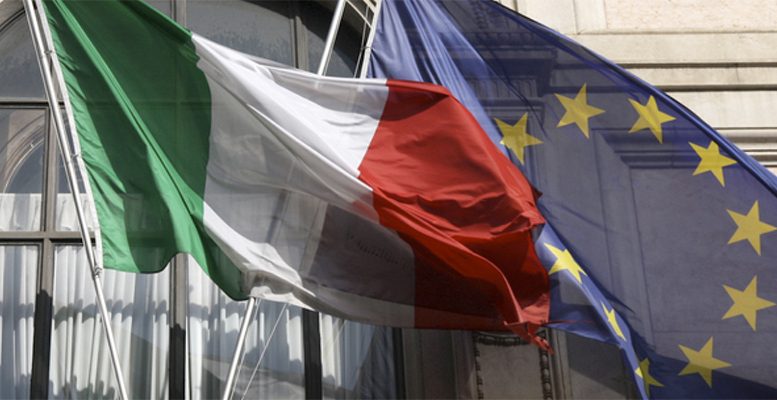 The Italian and EU flags waving at the Quirinal Palace

According to the initial draft of the Italian government budget from October 2018, the budget deficit would stay at 2.4% in 2019. However, after a vivid dispute with the European Commission, a deficit of 2.04% was agreed. This compromise permits Italy to avert the EU excessive deficit procedure, apart from already being well above the past limits deemed compatible with the fiscal rules of the Stability and Growth Pact. A report by Flossbach von Storch Research Institute explores the different scenarios for the procedure.

The compromise was eventually reached because the Italian government has curbed the three main electoral promises – citizenship income, abolishment of the pension reform and (for 2020 and 2021) safeguards on the value added tax (VAT).

In particular, despite the government assurances, there is a major gap between the agreed and potentially required funds to cover all seven million Italians potentially entitled to the “citizenship income”. The budget law allocates 7.1 billion Euro to this scheme – two billion Euro less than the already tightly planned budget draft from October 2018. Moreover, of these seven billion Euro one billion Euro would be used to reinforce the job centers and 2.5 billion Euro to renew the preceding scheme of the so called inclusion income (REI, or reddito di inclusione). This implies that only 3.6 billion Euro could be effectively spent on specifically the citizenship income, which is far too little if all possible beneficiaries are to be reached. The same holds for the years 2020 and 2021. According to the budget plan, funds would increase slightly in absolute terms to 8.1 billion Euro in 2020 and 8.3 billion in 2021, but only because funds for the period 2020-2021 are supposed to cover the whole year instead of nine month like in 2019.

According to the budgetary recommendations of the Ecofin from July 2018 (as adopted also by the EU Council) Italy would need 0.8% deficit ratio to comply with the path of public debt reduction compatible with the European fiscal rules.

Finally, regarding the safeguard measures on VAT, they will not be introduced in 2019 (implying 12.5 billion Euro less revenue), but could be reintroduced in 2020 and 2021 – against the previous government’s promises.

These estimates should be, however, treated for what they are–namely a pie in the sky – for two main reasons. First, the implementing decrees for the planned measures must still be announced in the coming months. And since these measures are the symbol of the joint venture between the ruling parties Lega and Cinque Stelle, it is plausible to expect that the government will push to deliver them sooner than later. Second, Italy entered a recession at the end of 2018, which renders the entire government’s budget planning far more complicated and less predictable.

Accounting for these uncertainties and based on the available information, the experts run three scenarios – 1) “benign”, 2) “government +”, and 3) “adverse” – on the evolution of the Italian government budget over the three-year period of the government projections between 2019 and 2021.

Scenario 1: In the “benign” scenario we assume that the government is able to deliver on the formal commitments contained in the current budget law, but unable to deliver on its electoral promises under the “contract of the ‘government of change’”. However, we take the downward revised estimates of real GDP growth and CPI inflation of the European Commission (EC), from early February 2019.

Scenario 2: Under “government +”, we take the growth forecasts of the European Commission from the benign scenario, but assume that the costs for both the citizenship income and the pension reform are underestimated.[2] We also make the plausible hypothesis that the government would not raise VAT, resulting in 12.5 billion Euro less revenues in each 2020 and 2021. It should be noted that we make conservative assumptions here, as we consider only the minimum, or flagship “adjustments” to bring the government plan more in line with the election promises. Accordingly, any further extension to this minimum would mean an even higher deficit ratio.

Scenario 3: In the adverse scenario, the Italian economy would enter a recession in 2019 (with nominal GDP growth of -1.5%, which is half the magnitude observed in 2009) and would turn back to grow moderately afterwards, in line with EC forecasts. Accordingly, following the experience of the past crises, analysts assume that the expenditure/GDP ratio would rise by three percentage points in each year in the period 2019-2021, compared with the ratio observed in the pre-crisis year.

The mere slowdown in economic growth as currently predicted by the EC would not have a significant impact on the path of the deficit ratio, provided that the Italian government sticks to the numbers promised to the EC.

To sum up, Rome managed to kill three birds with one stone so far. The government 1) reached a compromise with Brussels on the budget, 2) negotiated a budget deficit lying already above the limit compatible with the fiscal rules of the Stability and Growth Pact, and 3) included all the promised measures in its budget law, albeit in homeopathic doses. The way of minimal confrontation with Brussels helps Rome to save face ahead of the European elections in May 2019. But after the elections, the Italian government could use the favor of the hour and enter the next round of its budget-game. Experiences so far point to that.