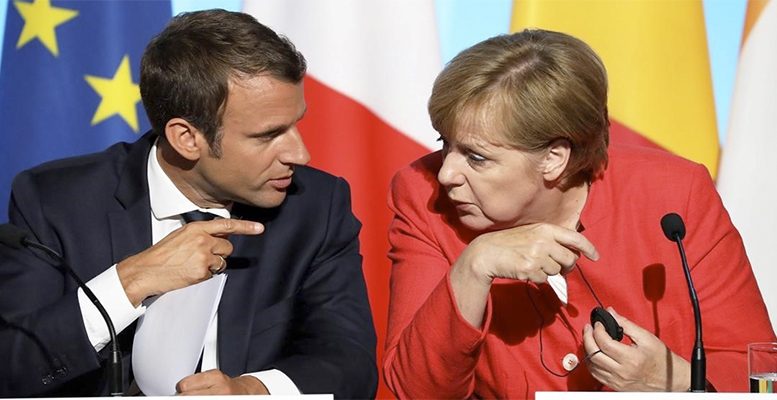 It’s been some time since Europe has had a leader with such clear ideas as Emmanuel Macron, but Angela Merkel is not really happy about it. And that’s logical, because she has been calling all the shots.

Macron wants more unity in key areas, like his project to form an IMF at a European level. It would be called the EMF. This would allow for more fire power when dealing with unforeseen crises and help for countries in difficulty. But it would mean that the member countries would have to put in capital according to their size. No way. Merkel does not want any autonomous organisation. She doesn’t even want the Commission to recover part of its former splendour from the days of the birth of the euro, with Jacques Delors as the great leader. At that time, there was at least an attempt at European leadership, but Angela does not want that (by the way, Germany’s superpower comes from the euro, which opened the door to reunification). Merkel prefers converting the Eurogroup – which has been a total failure in its management of Greece – into a supergroup of 19 members of the euro, with intergovernmental leadership. The logic of this is perverse but as clear as crystal: in this way she has the majority and is in a position to have the last word on what she refers to as objectives “boost competitiveness,” where they have a significant advantage over the rest of the countries which are not their satellites.

So it’s difficult to imagine Macron achieving anything more than a testimonial success. And, quite honestly, I am sorry about this because Europe cannot fall by the wayside. Germany doesn’t want Europe to become a north-south transfer ground, and without that there will be no Union. Just as there wouldn’t be if Extremadura and Andalucia were not net beneficiaries of transfers from the rest of Spain, or Wisconsin from New York. This is the crux of the Catalan independence issue. If they achieve it, Spain will go down the tubes. And so would Europe sooner or later, if not that it remains involved in a melancholic game of highfalutin words which no-one believes.

But it’s an iron grip. Whoever wields effective power does not let it go, so don’t expect even the slightest concession from Merkel which is anything more than esthetic. Others have been thwarted by her, like the British, the French, and everyone who doesn’t belong to her court of small, satisfied countries, although the populists are nipping at their heels.

Merkel has managed to sort them out with a “Grosse” Coalition and will remain immovable for another four years.