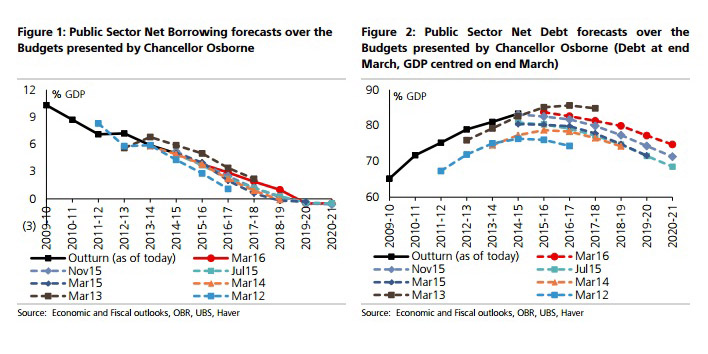 UBS | The Chancellor’s latest Budget saw the cumulative forecast for government borrowing over the next five years revised up by close to GBP 40bn. This reflects both weaker cyclical growth and also the Office for Budget Responsibility (OBR) taking a gloomier view on UK trend productivity growth. The upward revisions to borrowing would have been larger and the government would have missed its fiscal targets had the Chancellor not announced net revenue yielding measures over the closing years of the forecast period. At the same time, in the earlier years the Budget represents a very modest fiscal loosening.

There was a very long shopping list of policy measures which on balance by the end of the forecast raise enough revenue or cut spending sufficiently to bring the government back into surplus. Up front measures included raising the personal tax allowance and cutting business rates for smaller companies. Further out, spending cuts and corporation tax reforms raise revenue.

Overall this felt like a similar Budget to those seen in the 2010-2015 Parliament, with which previous fiscal austerity being chipped away at. But the big risk of a UK Brexit was not (understandably) factored into the forecasts. If the UK votes to leave the EU, much bigger deteriorations in borrowing and subsequently larger spending reductions are possible.

Gilt supply rises, but by less than expected

With only two months’ data to come for fiscal 2015, it had seemed likely that the Chancellor might have to admit to an underfunding of the public sector borrowing requirement in the current year, and that this would need to be added to next year’s remit. However, the full year estimate was surprisingly revised down marginally, somewhat at odds with the fraying public finances outturns of recent months. As a result, there was a lower 2016 Gilt supply amount of £129.4bn announced by the DMO after the Chancellor’s speech. This is slightly more than the £127.4bn of issuance in 2015, and the split between types and maturity sectors will be very similar next year.

Alongside the announcement of the remit the DMO confirmed some important changes to the way it will set about smoothly fulfilling the financing requirement. A relatively large £8bn has been left unallocated ex ante, and will be split between different sectors and operations as market conditions dictate. This sacrifices a degree of transparency for flexibility, as does the rise in both non-competitive bid allowance and the Post Auction Option Facility from 10% to 15% in each operation. Occasional recent bouts of market illiquidity and weak auction outcomes have provided a glimpse of what may lie ahead if yields start rising materially, especially as Bank of England QE reinvestment flows will be lighter next year, and overseas investors may become more cautious in their investment activities over the months leading up to the EU Referendum in late June.