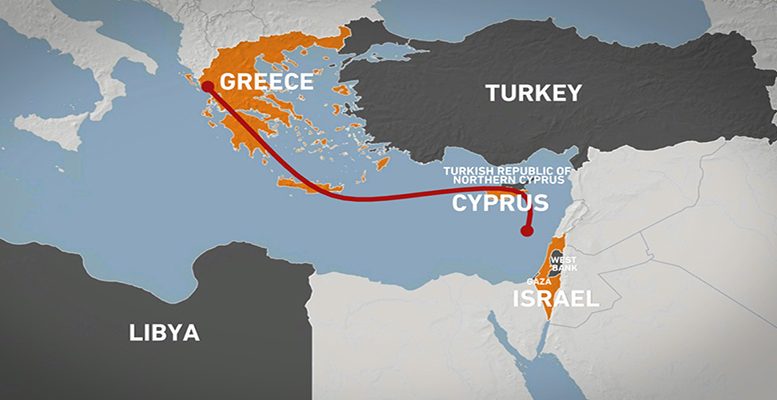 Nick Malkoutzis (Macropolis) | Almost a decade ago, in February 2010, the Greek prime minister at the time, George Papandreou, and his Israeli counterpart Benjamin Netanyahu had a chance encounter in a Moscow Restaurant. It triggered a series of events, primarily a rapprochement between Greece and Israel, that culminated last week in the Greek, Cypriot and Israeli leaders signing an agreement to progress with the EastMed project, a 1,900-kilometer undersea pipeline that could transport Israeli gas to Europe.

If completed, the project could help diversify the EU’s energy sources and has so far received backing from the European Union and the United States, which has provided political support for the tripartite alliance through the so-called 3+1 process.

The signing ceremony sparked some over-the-top reactions in Greece, with some commentators claiming that it was a gamechanger in diplomatic, energy and economic terms. Others argued that the move left Turkey totally isolated.

Reality is more complex as there are questions about whether the pipeline will ever get built, particularly because of doubts about whether the funds for its construction, which will require several billion euros, can be raised. Also, the glut of gas on the international market and the EU’s bid to move away from hydrocarbons are other factors that could count against the project.

In diplomatic terms, though, the scheme is serving to draw Greece, Cyprus and Israel closer together, while also grabbing Washington’s attention at a time when its allies might have reason to be less certain of Washington’s positions and willingness to engage. This takes on added significance given the instability in the region. However, as geopolitically important as this budding alliance is, talk of Turkey being left stranded appears misguided.

MacroPolis asked Dr George Tzogopoulos*, who recently co-organised a meeting of the Israel-Hellenic Forum with the B’nai B’rith World Center in Jerusalem, to share his thoughts on the importance of the EastMed deal, the tripartite and what role it could play in future diplomatic developments for Greece and the Eastern Mediterranean region.

What’s the basis for this tripartite? Is it Israel looking for new allies in the region after the breakdown it in its relationship with Turkey? Is it a case of Greece and Cyprus looking for another partner in the region due to a lack of confidence in the US under the Trump administration? Or is the unpredictability and provocative nature of Erdogan’s leadership the binding agent?

More than 10 years after the beginning of the Greek-Israeli rapprochement, the foundations of the cooperation scheme are solid. Greece, Israel and Cyprus share several joint strategic, economic and cultural interests. Obviously, the Turkish factor should not be ignored. But even after the normalisation of ties between Israel and Turkey in 2016, the tripartite is making impressive progress. From a Greek perspective, the US support is necessary for the tripartite to flourish. This is slowly happening, although more time will be required.

Does this tripartite have the makings of a long-term alliance or is it too early to tell? What are the risks that Athens must look out for moving forward? If there is a change of government in Israel, could the next administration choose to go in a different direction?

The more Greece, Israel and Cyprus talk to each other, the deeper the content of synergies becomes. I believe an alliance is in the making. But for it to have a military nature, it is too early to tell. For now, that seems utopian. Greece is concerned about the impact of Turkish-American relations on the further development of the trilateral scheme. Turkey remains a valuable ally for the US, and this might cause Washington to refrain from actively supporting the democratic bloc. Israel will be committed to the continuation of harmonious cooperation with Greece and Cyprus. A change in the government will not lead to a different direction. Although Israel and Turkey cannot be considered enemies, their differences remain systemic. For example, Israel accuses Turkey of hosting Hamas offices in Istanbul where terror attacks are being planned.

Is the EastMed pipeline the centrepiece of this cooperation or are there other areas where the three countries are working together that are not receiving so much attention?

The EastMed will be a flagship, if constructed. Other issues matter, including joint military training, trade, tourism, exchange of know-how on start-ups and the fight against anti-Semitism. Even if the EastMed is not be implemented and other options, such as Egyptian terminals, are preferred, the tripartite cooperation will still flourish.

*You can read the entire interview here.