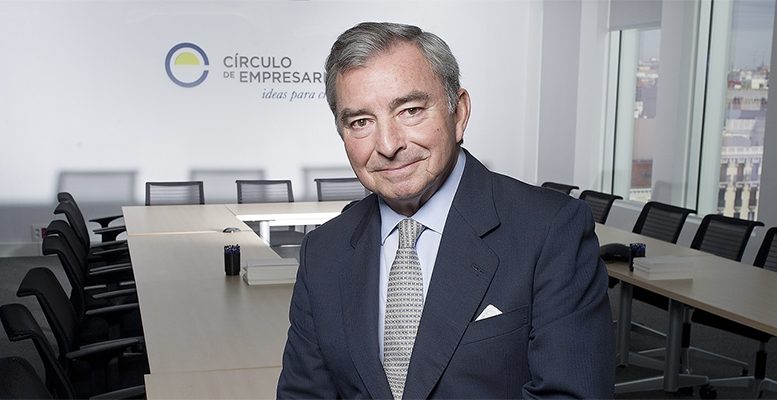 “We have been left without a project, and so it’s difficult to reach a consensus…we need to establish the basis for a renewed, improved project for Spain’s modernisation, to improve the education system, boost the creation and growth of the business fabric, reduce the weight of the black economy…” and that, namely mapping out a horizon for Spain, is just what the Círculo de Empresarios (Businessmen’s Association) is trying to do with its latest working documents. The Circulo has 225 members and celebrates its 40 anniversary this year.

The Círculo de Empresarios was created in 1977 as a “centre of thought to defend the freedom of the economy, in other words the free company and the free market,” says its Chairman Javier Vega de Seoane. In addition, although this was made more explicit at a later date, “to defend the entrepreneur spirit and the figure of the businessman as a creator of value and, therefore, wealth and jobs,” but not as a lobby, Vega de Seone explains: we were created to defend the general interest of Spain, not the interest of the business class.

Q: The Círculo’s latest document refers to the “horizon of 2030” with the slogan “A better Spain for everyone”. A good intention and something more?

A: Those of us who lived through the Transition, which was a very inspirational period, know that the “invertebrate Spain” got its backbone at that point because we had a common project which was liberty, democray, Europe, modernising the country, developing the welfare state…All this meant we had a common and shared project, apart from each one’s ideas. Now, after the former success, we don’t have a common project, we don’t really know where we are going and in this context it’s very difficult to reach major agreements. The lack of a common project seems to us to be the reason for a large part of our problems. A piece of information: in 1978, the consitutional project obtained the highest level of participation and approval in Catalonia. Now the emergence of phenomena like populism or extreme nationalism have their origins to a large extent in the lack of backbone. So we propose thinking about how to recover the common project. We have asked one of our members, Ingemar Naeve, who is Swedish and Spanish, and who knows and loves Spain very much, to work on a project which we are calling “Spain 2030”. This is to outline what we could do to make Spain better, to recover a shared project, within a horizon of 15 years.

Q: This implies an optimistic and hopeful stance…

A: We can cite Gramsci here, with his pessimism of intelligence and optimism of goodwill. Behind us we have the huge success of the Transition and democracy. This should give us the self-esteem to realise that if we come to an agreement we can repeat the success. If each person within a human organisation does what he should do beause he wants to, with his emotional energy supporting the project, things will go very well. This is very difficult in taylordian organisations. In my opinion, three elements are required: a common project that everyone understands and takes on board, which needs to be simple and inclusive. Furthermore, knowing what the project is, people need to have the information to be able to take the right decisions on their own. Thirdly, people need to be trained properly, even at a higher level. And experience tells me that a fourth emotional element is needed which we can call corporate affection: people feel this project is theirs, they have confidence in it. Without those four elements it doesn’t work.

Q: And this pattern can be applied to the Spanish society?

A: A company where people are angry doesn’t function, nor does a country. Elements of inclusion are indispensable. One problem in Spain, and in other countries, is that in such a disruptive situation as we have at the moment we are bewildered, without any project and it’s difficult to mobilise the society. Particularly when there is a lack of confidence due to corruption, growing inequality…people don’t trust the leaders, there is no story which moves and convinces us.

Q: So your optimism is utopian…

A: Utopias have a disadvantage, namely that you never attain them. And an advantage, which is that they point the way forward.

Q: Where are we now?

A: The first thing is to recover confidence. If people are mistrustful, there is no way you can mobilise them. Re-establishing confidence is essential, so we have to create situations of mutual understanding between people with ideas and people with credibility. Credibility and rationality, managing emotions, leaving the crazy ideas aside.