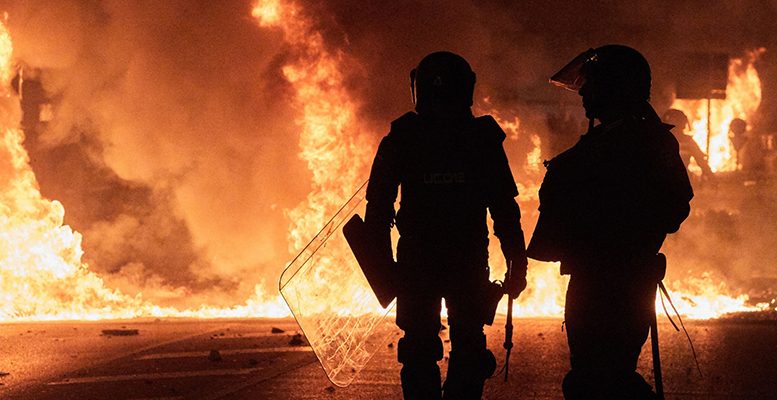 Fernando G. Urbaneja | It was known that the Supreme Court would deliver its verdict on the separatist “process” at the beginning of October before the general election was called. What was not known was scale of the separatist response to any sentence other than not guilty, which was impossible given the facts and the charges.

The verdict arrived, coherent and consistent, signed by the seven judges with the accused found guilty of sedition (more benevolent than rebellion, proposed by the prosecutors) and sentenced to between 9 and 12 years in prison. And the separatists´ response also arrived, prepared weeks before with a strategy of popular mobilisation with massive demonstrations, an attempt to paralyse the community (roads, airports, stations, businesses, schools, hospitals …) and also violent actions, by urban guerrillas, in significant places: police stations, government offices, courts…

The two faces of Catalan separatism: the official face, massive, citizen, peaceful although authoritarian and imposed; and the subterranean face, informal, obscure, with organised groups trained for insurrection. Groups which provoke the police in search of a violent response with which to construct an already prepared narrative of police torture and excess. But the balance of six nights of insurrection is a police in critical condition and 300 policemen injure with professional and constrained behaviour. Also a hundred arrested and significant damage in the cities.

For the separatists the balance of the response to the verdicts is negative: first because the demonstrations have been smaller than on previous occasions; massive, but smaller. And secondly because the image of violence, barricades, and fires in the street have been shown live on television everyday, with devasting images for the pacific and democratic narrative to which the separatists pretend. The differences, arguments and bitterness between the different separatist groups immersed in a battle for power and influence have also been more obvious than ever, which will have consequences in the medium and long term.

The electoral campaign from which will emerge the new Parliament and, perhaps, a government remains wrapped in this week´s “Catalunya in flames” with unforeseeable consequences, above all among the 20% of undecided voters. Polls point to a socialist party on the way down and a Partido Popular on the rise. The prospects of the far right Vox are improving, while those of the far left Podemos and centrist Ciudadanos are in decline. In any case, a panorama as incapable of producing a government as before. But twenty days remain to mobilise these undecided voters, who will decide at the last moment, including not to vote.