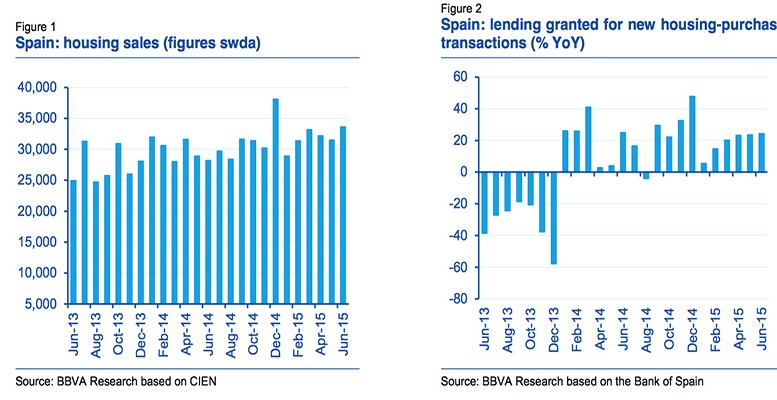 Within this setting, construction activity showed significant growth, albeit from a relatively low level. Macroeconomic prospects for the second half of the year will continue to contribute sector recovery.

Over the first six months of 2015, a total of 188,432 housing sale transactions were completed, according to the latest figures from the General Council of Notaries, which represented a 7.9% increase on the first half figures for the previous year. The time series profile for these shows a steady improvement in sales (Figure 1) as the year has proceeded, up to a level of 37,600 transactions in June, which figure implies YoY growth of 19.4%.

This positive performance by real estate sales has been underpinned by the sound progress of demand-side fundamentals: on the one hand, in the past six months the Spanish economy has created almost 300,000 new jobs, according to the latest figures from the LBS (Labour Force Survey), while on the other hand, despite the stagnation witnessed in June and July, confidence and the outlook for the next 12 months on the part of consumers continue to show highs.

On top of this, the sound health of some of the key economies that generate demand for housing in Spain, such as Germany and the United Kingdom, in combination with the depreciation of the euro, continue to be major assets for the Spanish real estate market, where, according to the figures for the opening three months of 2015, 17% of purchases were made by foreign subjects.

Mortgages for housing purchases again picked up in June, with the number granted achieving a rise of 36% in YoY terms. This marked the conclusion of six months of continuous mortgage market growth, with 26.8% more mortgages signed than in the same period in 2014. The market’s expansion was also visible in the volume of lending granted for housing purchases, which increased at a rate of 19% in the first six months of 2015. In June in particular, the volume of loans jumped by 24.2% and reached 10 consecutive months of rises (Figure 2).

The financial stability observed up to now has worked in favour of cutting official interest rates and closing up the rate spreads applied by financial institutions. Thus 12-month Euribor ended the first half of the year at 0.163%, a historical low which held practically throughout July (0.167%). Together with the gradual reduction of mortgage rate spreads used by financial institutions, this led to a further drop in the rate on new mortgages which closed the first half of the year at 2.20%, almost 40 basis points below the interest rate applying at the end of 2014.

Neither short- nor medium-term forecasts hint at any major rate rises, for which reason the stability of the cost of mortgage financing at relatively low levels is expected to continue to encourage the real estate sector recovery.

New home starts are growing apace, with a 28% increase in the first five months of the year

In the first five months of the year, building activity stuck to the growth trend that began in late 2014 and which has led to a rise of 28.2% YoY in permits for new home builds approved by quantity surveyors. This is all despite the fact that in May, which is the last figure that is available, housing starts experienced a slight correction after the strong growth recorded in the previous month.

A high rate of growth in construction starts has arisen in a context where new housing production had been at a low. This pick-up in activity has also been reflected in how other variables have performed, such as employment and investment. Thus, from the labour market perspective, the LFS figures for the first six months of the year show substantial employment growth in the sector (11.6% YoY at the end of the period), whereas in the second quarter this was more moderate than in the first. In this respect, figures for those registered with the Social Security system also indicate employment growth in the first half of the year (close to 5% YoY), with this easing in the latter part of the period. On the other hand, the national accounts for the second quarter of the year published by the INE show that growth intensified in residential investment, this time arriving at a rate of 1.3% QoQ, which means that progress has been made for six straight quarters.

The opinion of the business community with respect to future developments in the sector has become more positive over the first few months of the year, as can be deduced from the construction business climate index (Figure 4). In fact, for the residential segment of this index, this is now at levels akin to those at the outset of the crisis.

The outlook for the second half of 2015 is bright, though not free of risk

The figures for the first half of the year and the short term forecasts mean that we can remain optimistic about the sector’s progress in the second half of the year. Growth in economic activity, within a situation of financial stability that will continue to encourage increased lending at relatively low rates, will mean that inroads can be made into job creation and restoring consumer confidence, which are key to housing sales growth in the second half of the year. Meanwhile, real estate activity will continue to be buttressed by demand growth and the gradual take-up of the overhang of new housing, above all in the chief areas of economic activity, which will allow it to close the year with notable growth, although this is from a relatively low base. As a result, prices are expected to hold steady, as rising demand, in a context of a reduction of stocks on the supply side and relative financial stability, will help bring about a slow but sure recovery in real estate prices.

This said, the sector’s progress is not free from risks. As with the economy as a whole, the uncertainty associated with political stability in Spain and the fallout that might come from the economic instability that has arisen in the emerging markets (mainly China) could slow down the pace of the real estate market’s recovery.