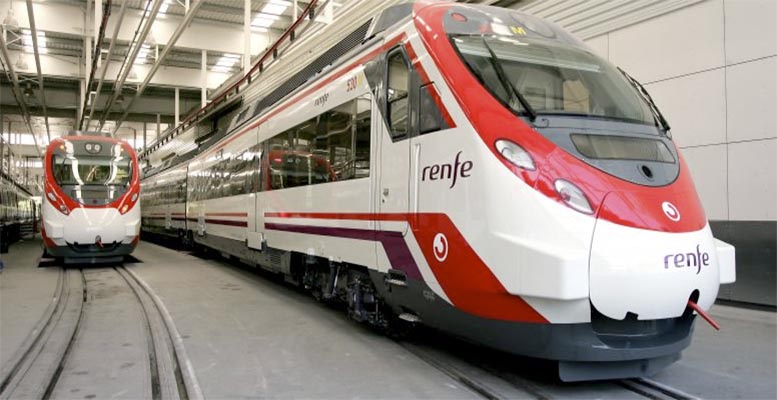 The Fuel Cells and Hydrogen Joint Undertaking (FCH JU) of the European Commission has selected the project FCH2RAIL to start negotiations for an EU grant agreement valued at 10 million EUR. FCH2RAIL would be technically led by CAF and would benefit from the European funding under the H2020 Program to work on the development of a railway vehicle prototype powered by hydrogen.

The project phases will cover both the design and manufacturing of an innovative prototype, in addition to all the tests required for validation and approval. The underlying goal is to achieve a zero emissions product with competitive operating performance relative to current diesel engine powered trains, and applicable to both newly designed trains and refurbishments.

An essential part of the project is the participation of European committees for railway standardization in order to advance the drafting of new standards and the update of existing standards with the required conditions to integrate the fuel cell technology in the European railway networks.

The selected Consortium, formed by the companies CAF, DLR, RENFE, TOYOTA MOTOR EUROPE, ADIF, IP, CNH2 and FAIVELEY Stemmann Technik, has started the process to wrap up a contractual agreement establishing the project scope of each consortium member. This process is scheduled for completion before the end of the year, after which the projectwould kick-off in January 2021.

Once launched, the project which includes companies from four European countries (Spain, Belgium, Germany and Portugal) will extend for approximately 4 years, drawing from a budget in excess of €14 million, with approximately 70% being supported by European funds.

This proposal includes the design and manufacturing of a prototype based on the existing RENFE’s 3-car commuter unit belonging to Civia series. The new power generator system based on the hybridization of hydrogen fuel cell systems and LTO batteries, will combine with the vehicle existing traction system to become one of the first bimode railway demonstrators fitted with hydrogen fuel cell systems. Therefore, this vehicle concept contemplates the ability to run in electric mode on the electrified infrastructure, and operate the hybrid mode for running on catenary-less sections. Then, the track testing phase will start to optimize the hybridization solution and the bimode operation (electric/hydrogen). Finally, the validation process will take place in three European countries, with varying levels of qualification and approval in Spain and Portugal and a third country still to be determined. Furthermore, the project will also comprise the research of various solutions for exploiting the heat generated by the hydrogen fuel cell system as a means to improve energy efficiency.

It should be noted that despite the deployment of traditional track electrification programs currently under way, this effort is limited by high cost constraints and will, at any rate, take decades to be completed. As of today, half of the railway lines in the EU are not electrified but are operated with diesel trains which generate air and noise pollution.

As a consequence, many public and private transport authorities in the EU and beyond have shown a growing interest in hydrogen fuel cell technology in the railway environment. This project underpins the commitment to the development of this innovative technology in a challenge to become a competitive alternative to diesel trains within the current decarbonisation framework.