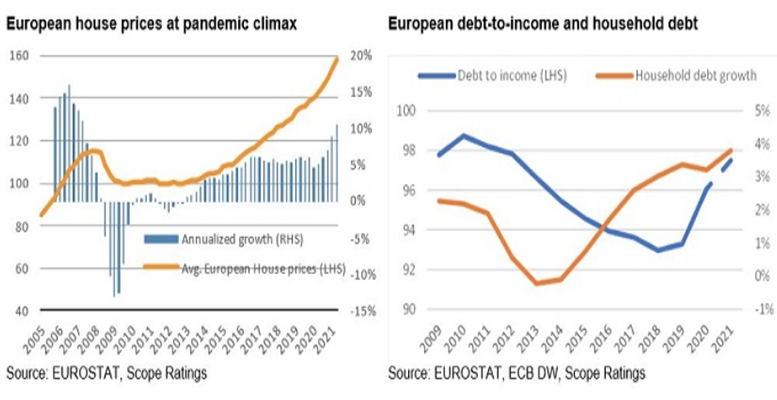 Mathias Pleissner (Scope) | House prices in Europe may have peaked during the pandemic. The 10.6% price increase in the 12 months to the third quarter of 2021 may have been the final sprint. The last time prices grew by double digits was in 2017, a year before they plunged 15%.
House prices continued to be driven by ultra-low interest rates, a lack of investment opportunities, historically high household savings levels and consumers’ desire to move to more spacious homes, fuelled by the rise of telecommuting.

In regard to this, house prices in Europe have been a hot topic since they started to recover after the financial crisis. In some countries, bubble risks were identified as early as 2010. However the consensus then was that leading indicators, such as household debt and debt-to-income ratios, did not indicate that housing had entered bubble territory.

Indeed, current levels of 4% growth in household debt are a far cry from the 8%-9% annual growth rates seen in 2004-2008. But the trend has been upward since 2014. Strong economies such as France, Germany, Austria and Belgium have shown debt growth well above 5%, before and during the pandemic. The debt-to-income argument seems to be gaining ground, demonstrated by the sharp rise in 2020. That said, some attribute the increase to short-term unemployment. However, by the end of 2020, unemployment had almost returned to pre-pandemic levels.

Inflation could put pressure on housing prices. But given the European Central Bank’s reluctance to raise rates and the lack of investment alternatives, debt-financed house purchases will remain attractive. European and national policymakers and regulators alike are trapped. In the medium term, the most obvious tool to fight inflation – raising interest rates – is not feasible for eurozone countries (and those with fixed exchange rate currencies). Rates will remain virtually unchanged in 2022.

Fiscal policy could soften the housing boom. Higher taxation could help fight inflation, but will be widely criticised, especially in light of the pandemic. Politicians could also decide to halt public investment in infrastructure while inflation rises. But this does not seem a sustainable or popular action, not least because public investment creates jobs.

Finally, after their use declined in recent years, national supervisors may increase or reintroduce macroprudential measures. Germany has been slow to activate such measures, but in its first intervention in 2022, the BaFin (Federal Financial Supervisory Authority) has asked banks to build up buffers again as the housing market heats up. It intends to increase the countercyclical buffer from 0% to 0.75% from February 2023 and to introduce a supplementary 2% buffer for residential mortgages. We do not expect this to be a game changer, but rather a first step towards making German mortgages less attractive, provided that the ECB maintains its ultra-low rate policy. Other national regulators are likely to do the same.