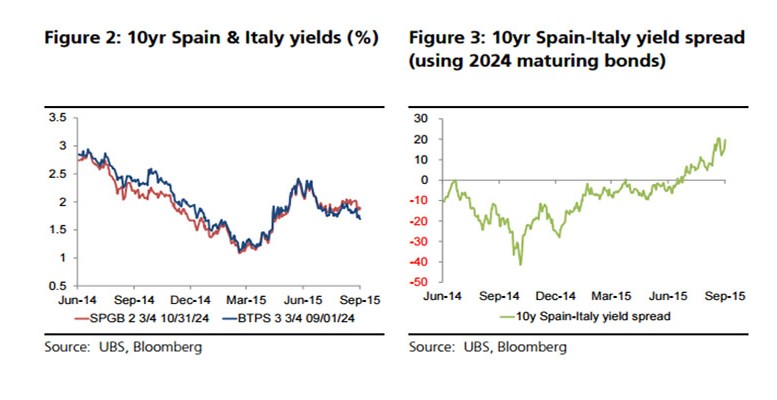 UBS | Pro-independence parties in Catalonia have won a majority of seats – but not of the total of votes cast – in the Catalan regional elections yesterday. As a result, we would advise investors to remain cautious about buying Spanish sovereign debt until some clarity emerges over the next steps of the new regional government.

Bond market risk lies in the next steps

Principally, this will be a question of whether it begins to follow the 18-month roadmap to independence that the winning “Junts Pel Si” grouping has laid out. The central Spanish government has maintained that the building of government institutions is illegal under the terms of the constitution. As a result, the main risk for the bond market lies in the proximate actions of the Catalan government and the response to them in Madrid.

It is not certain that the independence roadmap will be followed

CDC and ERC, the two main parties which comprise Junts Pel Si, stated before the election that they would take this course with a majority of seats (only) being won by secessionist parties. However, also composing this majority is CUP: a separatist party sitting outside of the Junts Pel Si grouping. CUP has stated that it would not wish to move towards independence without a majority of the votes as well. If it maintains this stance, it may make it difficult for the new regional government to pass all the laws necessary to follow its roadmap – even without the legal and political opposition from Madrid. With more than 97% of the votes counted, and 68 seats needed for a majority in the 135-seat parliament, Junts Pel Si appears set to win 62 seats, and CUP to win a further 10.

Spanish bonds would be cheap, but risks have risen not fallen

As we wrote recently, we believe that political risk for Spanish bond holders is concentrated in the result and consequences of yesterday’s election in Catalonia. However, most of the rise in spread versus other peripheral markets until this point has been the result of worries over risks arising from the general election. These we believe to be small. So if it does emerge that confrontation between the regional Catalan government and the central government in Madrid can be avoided in the near and medium terms, we would think that Spanish bonds would be a buy. In the meantime however, we believe that political risks have now risen and investors should not be increasing Spanish duration in their portfolios likely raise concerns on sovereign risk.