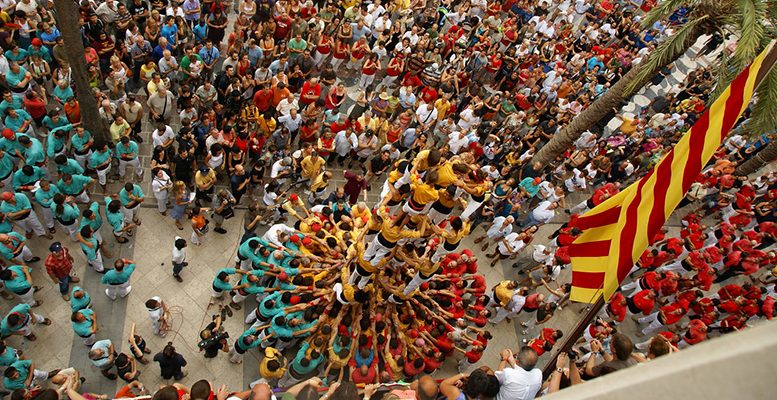 Ana Fuentes | A tense autumn was expected between Madrid and Catalonia, but perhaps it will not be so bad. With the Supreme Court´s sentence on the Catalan separatist leaders only weeks away, and the anniversary of the illegal referendum on 1 October, Thursday´s demonstration in Barcelona was seen as a key measure of the temperature of Catalan separatism. Finally the figures show that the tension has (apparently) reduced: according to the local police, 600,000 people took to the streets. It was a massive, peaceful and colourful demonstration, but with the lowest turn out in 7 years, when the strongest drive for independence began.

The representatives of the different separatist parties opted not to mix. Instead they lectured each other. The leader of Esquerra, Oriol Junqueras, in custody, told the French daily La Dépêche du Midi that Esquerra “has a 88 year history. What other party can say the same?”. All want to lead, but they cannot agree on how to respond to the sentence in the trial of their leaders. While Esquerra wants to call elections in Catalonia, the self-exiled Carles Puigdemont takes negotiations with the state for dead and argues for confrontation. The civil society groups that organised the demonstration call for a unified strategy, but know that for now they are the hope of a movement that always had many voices, but is now showing it in public.

In Barcelona, analysts like the editor of the newspaper La Vanguardia, Marius Carol, warn against interpreting the low turn out in the demonstration as a clear sign that separatism is declining. “This cause continues to receive significant support in Catalan society and any temptation to underestimate it would be an inaccurate analysis and could lead to mistaken decisions. The Catalan crisis will only be resolved, as we have said repeatedly, through negotiation, seeking points in common and agreeing a solution which, without being ideal for anybody, could at least be acceptable to everybody”.

The hottest political question in Spain at the moment is not the recovery of separatism in Catalonia, but the ever closer general elections because of the failure to agree between the socialists and Unidas Podemos. After seven years paralysed, the commission between the Catalan government and the state has been reactivated. A symbolic gesture to return the relations between the two governments to the halcyon days of 2011.