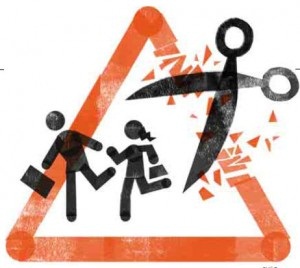 B. Toribio and R. Ugalde (lainformacion.com) | Fasten your seat-belts! This week we will see a new wave of cutbacks that will affect Spaniards'pockets. The president of the Spanish government Mariano Rajoy, and his team, have been warning the country for the last weeks, and here we explain how, when and why those measures will be carried out.

Next Friday July 13 is the beginning of many more austerity announcements in the Spanish process, a day when the new adjustments will start to take shape.

Which taxes will be raised?

All possibilities are on the table, but there is one that has been already decided: there will be a rise in VAT. Spanish Finance minister Cristóbal Montoro has confirmed this measure, despite being against any increase just a few days before.

President Rajoy’s plans for this tax are mainly focused on the increase of those articles with a super-reduced rate (4%), and those with a reduced rate (8%), to the 18% general rate. There will also be a rise of the special taxes (alcohol, tobacco, fuel). The Spanish Government is considering charging for goods and services that had been for free so far, in line with the co-payment introduced in medicines last week.

What other adjustments could be done?

The Spanish government will reactivate the policy of tax relief for residence. This measure is supported by Brussels, and its aim is to fight the housing bubble in Spain.

Retirement pensions and unemployment benefits could also be modified. The markets and the EU are asking for sound measures in those fields, but there isn’t anything decided yet. We could see an extension of the pension calculation to the whole working life (now it only focuses on the last 25 years), a tightening of the conditions to enjoy the unemployment benefits, or the shortening of these benefits.

On the other hand, civil servants and public employee

s could be forced to work for more hours. As a matter of fact, some regions have already implemented this measure: Madrid or Castilla-La Mancha are the pioneers in this field. The government could also reduce their salaries by removing their extra pays, or by introducing productivity controls.

When will be implemented?

The schedule is open; increase of taxes, reduction of costs and all the other measures that will be carried out depend on deficit target deadlines fixed by the Spanish government. Given that there is a two-year period to meet the deficit target, the whole amount of measures will not be implemented at once, but throughout the next two years. The proposed roadmap for the deficit target consists in meeting levels of 6.3% in 2012, 4.5% in 2013 and 2.8% in 2014.

Why is it necessary to do those cutbacks?

Because Europe is demanding them. And Spain, as country member of the European Union, must guarantee its economic stability. Thus, Spain must try not to expend more than it takes in, or otherwise not to let the difference exceed 3% GDP.

To fully understand why the European States are trying to implement policies of austerity, we can ask ourselves a simple question: can a family live forever expending more than they take in, and asking for credits to finance their lifestyle? The answer is no. Ideally, the economies should expend just what they earn and, where possible, save some money.

Will the Spanish risk premium go down with these measures?

This is the big question. In theory, all those measures are aimed to stabilising accounts, controlling expenses, increasing incomes and creating employment. Thus, they would calm the markets because their target is creating wealth and guaranteeing the repayment of the public debt.

The problem is that the investors want to see an actual application of those plans and measures, not just “a good intention”. And furthermore, they want to see an application in the good direction, i.e. with radical and painful decisions, even if they have a political cost. But, for now, that is still a mystery.