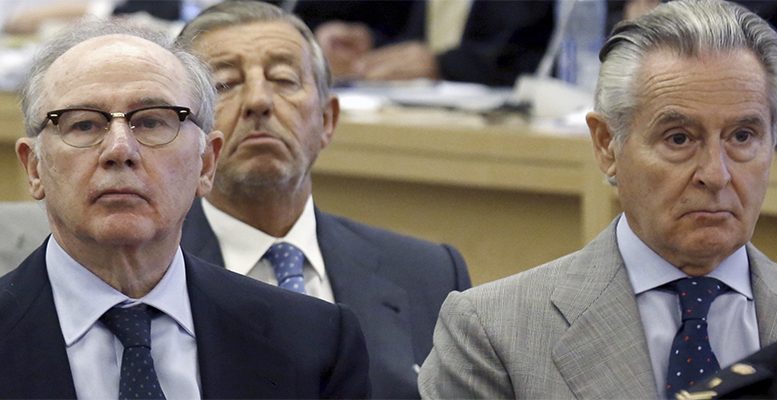 If there’s one sight that Spaniards have enjoyed more than any other in recent months, it’s that of Rodrigo Rato going on trial for misappropriation of funds in the High Court. Sitting alongside his 64 co-defendants in the ‘black’ credit card case dating back to his chairmanship of the lender Bankia, his face was a picture of stunned humility. It’s hard not to contrast that maudlin image with the sight of Rato in 2004, when he wore a Cheshire cat grin having been unveiled as the new managing director of the IMF.

The former economy minister’s dramatic fall from grace was recently confirmed with a four-and-a-half year prison sentence for squandering the money of the struggling Bankia with a shady credit card. Rato used it to buy alcohol, food, clothes, and, on one occasion, over  900 worth of shoes. Meanwhile his co-defendant Miguel Blesa, who received a six-year sentence, used his card to pay for an African safari.

If one specific scandal crystalized the Spanish elite’s excesses of recent times, then this was it.

But Rato and his former Bankia colleagues have by no means been alone in the dock lately.

King Felipe’s sister, Princess Cristina, and her husband, Iñaki Urdangarin, have been on trial, as have several Catalan politicians for attempting to implement their independence “roadmap”. Then there was the Gürtel megatrial of dozens of politicians linked to the Popular Party (PP) and a massive corruption network; and let’s not forget Lionel Messi’s problems with the law related to his tax issues.

According to columnist Rubén Amón, “the occurrence of so many judicial processes in so many different areas gives the impression that Spain itself is going on trial […] as if an epidemic were spreading.”

But of all these cases, the one that seems to draw the most unified outrage is that of Rato and the bankers. While the PP has continued to win general elections, the monarchy maintains a reasonable level of popularity and Messi remains a goalscoring idol, there is no hint of any such let-off for those associated with the banking crisis of half a decade ago. The freewheeling notion that Spaniards tolerate corruption comes grinding to a halt when the words “Bankia” or “NovaCaixaGalicia” are mentioned (five former executives of the latter bank were jailed in January, setting an eagerly awaited precedent).

A recent poll by Metroscopia showed that of Spain’s economic- and labour-related institutions, the financial system was by far the least trusted, with a 15-percent approval rate

The irony is that of all the recent corruption scandals, the Bankia credit card one was relatively small beer. The trial of Rato and company looked at how  12.5 million was misspent (Bankia is worth over  200 billion in assets), of which the former chairman spent just under  100,000.

Rato, it should be pointed out, also faces another probe into his handling of the disastrous public listing of Bankia, which impoverished many Spaniards; and his bank was one of many that sold customers a complex and ultimately unprofitable financial product called “preferential shares”.

Punishing Rato and others responsible for such injustices is, of course, crucial from a legal and moral point of view. But when it comes to restoring credibility, it is the banks, not the justice system, that face the really hard work now, such as helping Spaniards gain access to the housing market, improving profitability without cutting corners and generally rebuilding the trust that was demolished by an era of scandals.