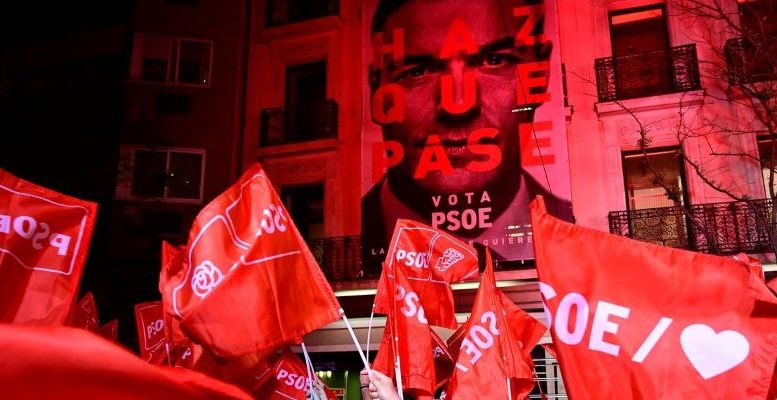 In one of the most disputed elections in the history of Spain, the Socialist Party won with 123 of 350 seats in Congress, which meant a 180 degree turn with respect to the previous elections of 2016.

The biggest loser of the night was the Popular Party, which suffered from the fragmentation of the right into three parties and in many constituencies was devastated by the party of the extreme-right Vox, even though in recent months the PP leader Pablo Casado had hardened his tone to appeal to the hardline sector.

Spain is no longer the exception in terms of nationalist populism. The party led by Santiago Abascal, who unapologetically bets on hunting, bullfighting and abolishing the laws to fight violence against women, entered parliament, but was not as successful as some had feared.

The party led by Pablo Casado for 10 months has not been able to keep its voters, who seem to have opted for Citizens or Vox.
The phase of talks and possible pacts starts this Monday. Will the Socialists ally with the extreme left of Unidas Podemos? The leader of the purple formation, Pablo Iglesias, who was the great sensation three years ago in the Spanish political landscape, has suffered a considerable defeat and is aware that he is no longer essential for Pedro Sánchez.

Another possible pact in the air, one that would be preferred by the Ibex 35, would be PSOE-Ciudadanos, the formation that most advocates for the free market. The leaders of both groups have experienced a distancing in recent months, exchanging harsh words, and their lack of personal harmony is palpable, although no one discards a tactical reconciliation.

The pact with the Catalan separatists and with the Basque nationalists is another of the unknowns. It would imply policies considerably different from those that the socialist party could carry out in case of a pact with Ciudadanos, which is openly against any concession to the pro-independence parties of Catalonia and has made it their banner.