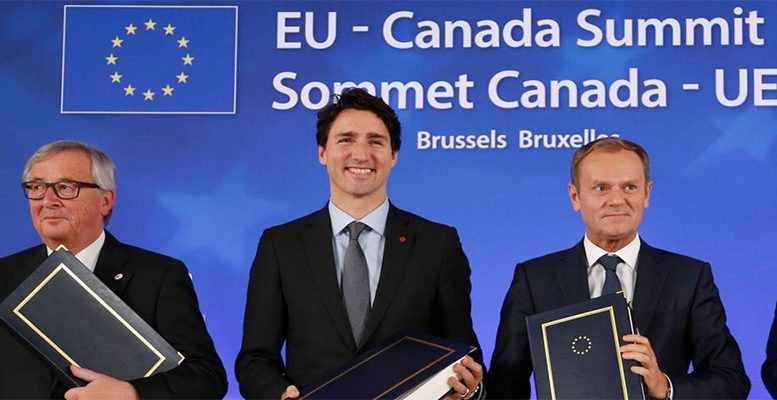 This week Spain ratified its free trade agreement with Canada, known as CETA (Canada-European Union Comprehensive Economic and Trade Agreement) in spite of the suprising abstention of PSOE. The socialist party had previously supported the protocol, but its leader announced a suprise change in stance, claiming that the agreement does not have any environmental or labour safeguards. In this context, we need to remember that trade relations between Spain and Canada are healthy and this is neither something specific to today nor is it coincidental.

At the moment, Canada is number 30 in the Spanish economy’s list of clients and 45th in its list of supppliers.  Within the EU, Germany is the country which exports the most to Canada, 30% of the total, while Spain is in seventh place. Since 2011, the trade balance has been in Spain’s favour, although in the first four months of 2017, Canada clocked up a modest surplus of 13 million euros.

Trade relations between Spain and Canada go back to the XVI century when Basque whale hunters arrived on the coasts of Newfoundland and Quebec. They built factories there to turn whale fat into oil for using in lamps to light houses. For further information, click here:

Spain’s PSOE party was not alone in showing reticence over CETA. Left-wing and antiglobalisation movements have criticised the treaty for, amongst other things, the lack of transparency when it was negotiated. They consider it as “the Trojan horse” of the TTIP agreement which is being negotiated with the US, accusing it of it benefiting the multinationals and not the citizens.

As far as the EU member states are concerned, the CETA has been blocked by the Walloon region in Belgium since its implementation on January 17. Romania and Bulgaria also complained about the lack of reciprocity with regards to the visas ‘policy. For its part, Slovenia and Hungary feared that the judges in the arbitration courts were not acquainted with their legal systems. Greece complained because the origin of Feta cheese was not respected and the German Constitutional Court has not yet had its last word on the subject.