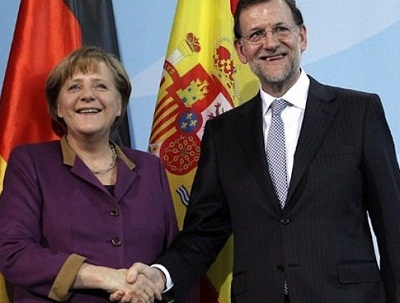 MADRID | You can fool someone for a long run. You may fool many people for a while. But you cannot pretend to fool everybody forever. Claims on Saturday that the deal only amounted to European lending for Spanish banks did not stand up to the week-end erosion. It was clear from the start that the money was to be channelled through a public body and fully covered by a State guarantee. Even the French government that pressed so much for direct support to financial institutions, readily asked Spain to provide written assurances it would foot repayment. You can christen the newborn as you wish but rescue will be his family name.

Such a debate about angels' gender has undoubtedly served to distract the public opinion from what this move entails. Above all, it has openly shown the inability to raise a sizeable sum of money in the capital markets, a bad omen that failed to slip inadvertently, escaping from market close scrutiny. It also meant a sudden hike in public debt and a sizeable increase in financial costs, fuelling fears that fiscal targets could not be met.

Minister de Guindos readily accepted that interest payments would be accounted for as current deficit. But he omitted to add that capital endowment provided to ailing banks would also come under the same item. The attempt to raise a firewall preserving public finances from financial contagion has failed to reach its objective. The renewed vigour of the risk premium shows beyond any doubt that curbing such a tendency will need something more that moneyi got my boyfriend back storiesong>. Unless potential deviation in budgetary goals is firmly put under control, volatility might continue to loom ahead.

Getting money is all the more welcome, especially when you happen to be short of it. But help is not given for free. Apart from repaying it with due interests, you are bound to offer creditors sound proofs you are trying in earnest to put readily in order your current disarray. Intervention will not certainly amount to the harsh treatment inflicted on Greece. But on substance it will not differ. Any hint or recommendation coming from Brussels will have to be considered as an order. Otherwise further instalments might be held in custody.

Even if the Troika (European Commission, European Central Bank, International Monetary Fund) doesn’t behave in an intrusive way, raising VAT and ensuring effective control of regional spending and unemployment benefits, plus extending retirement age, does seem a foretaste of other restrictive measures in the pipeline.

Indeed, some extra discipline coming from Europe might help us to redress the situation. Take for instance the banking reform once and again derailed under the pressure of regional governments. Think about the difficulties in trimming down unwarranted structural expenditure. Spain's government can only address these problems by choking off budgetary resources. Brussels might help by imposing far reaching reforms. This opportunity should be seized to streamline our administration, Universities, town halls and public enterprises. Let’s turn to our advantage the intervention imposed on us, instead of pressing to preserve sovereign rights to the very end. Let others do the homework we have proved unable to perform.