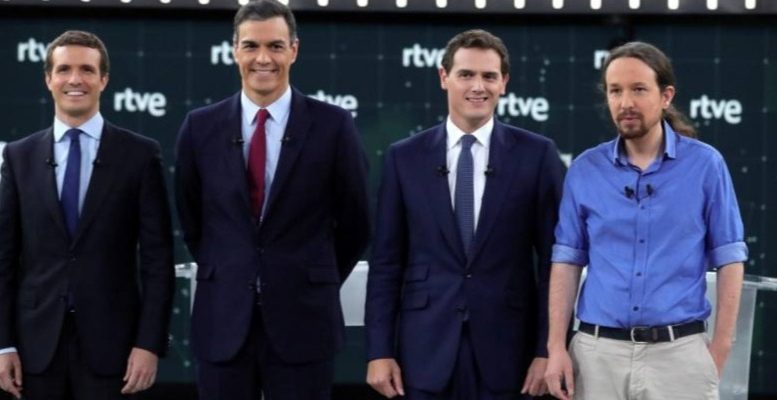 Shaun Riordan | Last night saw the first electoral debate between the main candidates in Spain´s general election on public television. The debate itself has had quite a history. Prime Minister Sánchez initially wanted to avoid the debate, insisting on a single debate on private television with the participation also of the leader of the far-right Vox, Santiago Abascal. The other parties and the journalists of Spain´s public television protested. Sánchez conceded: debates on public and private television, with participation limited to the leaders of the national parties already represented in parliament, in other words Pedro Sánchez himself (PSOE), Pablo Casado (PP), Pablo Iglesias (Podemos) and Alberto Rivera (Ciudadanos). After all the build up, the debate was something of a let down, and is unlikely to have changed anyone´s mind about the elections.

According to some polls immediately after the debate, the narrow “winner” of the debate was prime minister Sánchez. But in truth his performance was lack lustre. He knows he is leader of the pack and, unless there is a miracle, will be leader of the largest party after the elections and in pole position to form a new government. His combination of trying to look statesmanlike while avoiding errors offered little excitement. Oddly the same was true of PP leader Casado, who offered none of the reckless firebrand he has shown repeatedly during the election campaign. The role of attack dog against Sánchez was taken up by Ciudadanos leader Rivera, who nipped constantly at the heels of the other participants as he sought to expose their hypocrisy, and in particular Sánchez´ collusion with Catalan separatists. Finally, Podemos leader Iglesias criticised all with a certain coherence, but as his role will be at most to support a Sánchez government, his success or otherwise may be less relevant.

In fact, the debate had its own slightly odd dynamic. Although both Casado and Rivera attacked Sánchez, they did so mainly as part of their own fight to be the voice of the centre right. Indeed, to a large extent the debate, and the election, is a fight not between left and right, but internecine struggles on either side to be the authoritative voice of left or right respectively. This is less of a problem for Sánchez. There is little prospect of Iglesias and Podemos supplanting him any time soon. But for Casado this is a fight to the death to be the voice of the right in Spain, not only against Rivera but also against Abascal and Vox. With the PP heading for its worst ever results (according to the polls), it is a fight for his political career.

The other oddity of the debate was the almost complete absence of policy. Many commentators have already noted the absence of economic policy from the election campaign. Last night there was no mention of health or the key issue of further reform of the labour market. Perhaps less surprising, but still striking so close to European elections, there was no mention of foreign or European policy. Spanish politicians do not like talking about either. But if Spain aspires to a leading role in post-Brexit Europe, at some point her politicians will have to start debating what kind of Europe they want. We will see if these issues emerge in the second debate.