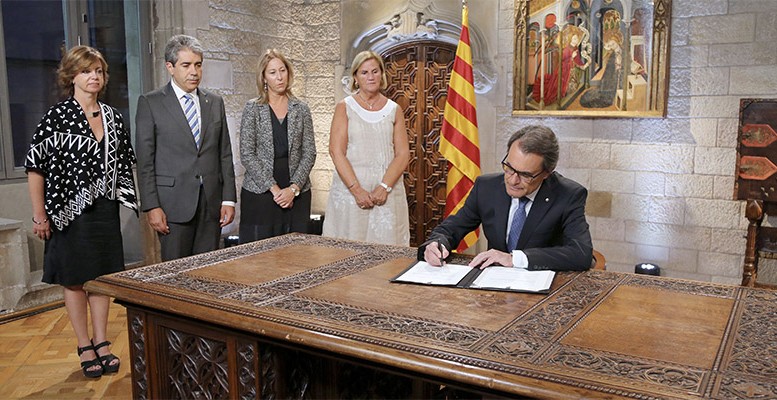 A last-ditch attempt on the part of separatist parties has brokered a deal for a new government in Catalonia. It came just in time, as the clock was ticking on new regional elections. The agreement forced incumbent President Mr Mas to step down, meeting the stone wall prerequisite imposed by the far-left CUP movement for providing its support. However he secured the job for a second-ranking member of his own party, thus keeping a firm grip on the political agenda.

Mr Mas previously cajoled his rival party’s leader Mr Junquera into joining forces under a pro-independence coalition. The aim was to win a comfortable victory, supposedly leading Catalonia into a quick exit from Spain. The coalition completely missed this goal, becoming the CUP’s hostage. Together they snatched a slim advantage in seats, but were short of securing overall support from voters. Turning the elections into a referendum proved a fiasco which didn’t prevent Mr Mas from pressing for a brand new State. As a skilled and seasoned politician, he twisted the arm of his chief opponent and forced the CUP anti-capitalist movement to support someone from his corruption-ridden party. Should things turn nasty, he would even avoid potential responsibility for leading an open mutiny.

A clash with Madrid seems inevitable, as soon as the new Catalonian cabinet starts implementing the roadmap towards independence. Should it choose to ignore that the planned measures are completely illegal, it would eventually force the central government to take strong action. This could range from the indictment of those breaking the law to suspend the region’s autonomous powers.

Madrid needs to carefully focus its answer, as any false step might boost the separatist sentiment in Catalonia. Confining action to law enforcement doesn’t seem the best way to tackle such a scurrilous challenge. But refraining from suppressing any rebellious mood would fuel a full-scale uprising. The best outcome is to find a middle-of-the-road answer and cross fingers that internal rifts and clashes between separatist partners may eventually bring the current Catalonian government down.