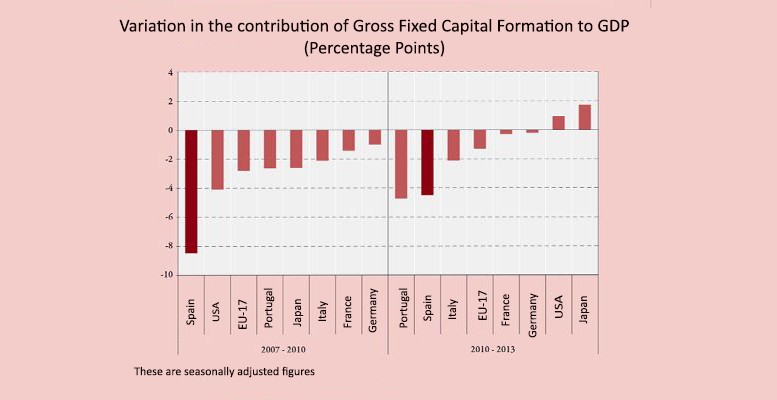 Spain’s current sharp economic growth is not sustainable because there are fundamentals which have stalled, variables such as productive investment and productivity which are not in evidence. That’s why the jobs which have been created are increasingly precarious. The graph above shows productive investment in relation to GDP in several countries which suffered during the crisis.

During the two periods into which the crisis is divided, Spain is the country where investment has fallen most severely, a key variable for growth to be sustainable. Without investment, the recovery we are seeing will be short-lived.

There are two main factors influencing this very marked investment behaviour: earnings expectations and financial availability. Needless to say the demise of both, with the latter’s collapse caused largely by the disastrous euro policy at the beginning of the crisis.

This has not happened in Europe yet, and even less so in Spain. The blow was too strong for the “animal spirits” of those investors who lost lots of money during the divestment process which happened in the first phase of the crisis, especially in the SME sector. Hundreds of thousands of these firms closed due to lack of contingency funds and financing. Meanwhile, the few large companies have defended themselves by divesting in Spain and investing abroad. But this divestment has not been replaced by a higher contribution from foreign direct investors.

There was excessive investment in construction, which was necessary for channelling towards other sectors. But adverse financial conditions meant this process was not a fast one. We are still at the starting gate. Loans to households and companies, as can be seen in the table Bank of Spain, are still falling. That’s why no one can speak about a virtuous circle: the favourable conditions (cheap oil, low interest rates, etc) will last.