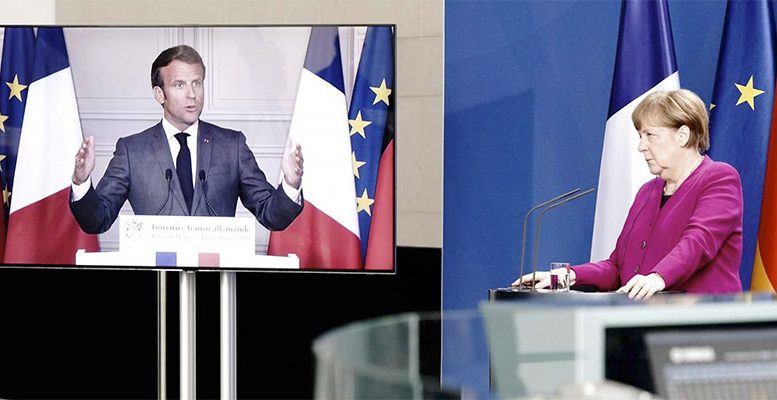 The Franco-German axis is back in operation thanks to the coronavirus crisis. Yesterday, the French president and the German chancellor agreed to propose the creation of a 500 billion euro fund to the European Union (EU). This fund would be to subsidise those countries most affected by Covid-19 through non-refundable transfers (not loans). The fund would be covered by the issuance of European debt by the European Commission (EC) and the financing raised on the markets would be transferred to the Member States through the EU budget, most of which would be financed by Germany. This is a mechanism similar to eurobonds, but much less problematical. And in fact, Paris and Berlin announced they were going to propose authorising the EC to finance itself in the name of the EU, while respecting the bloc’s treaties. So the safeguard for this mechanism to be acceptable to certain countries – in practice it is a kind of mutualisation in disguise – was that the debt issued in the name of the EU “would be eligible for repayment.”

The proposal is very much in line with the recovery plan which the European executive is working on currently. It is expected to be presented on 27 May, but the amount proposed for the reconstruction fund was a far cry from the quite regularly speculated sum of around 1 billion or 1.5 billion euros. In addition to this, the Franco-German plan avoids the “financial engineering” that Brussels has been accused of, which used a series of leverage multipliers that might be unrealistic or too demanding to make its calculations.

Market analysts agree that yesterday’s Franco-German proposal will probably mark the fate of the recovery fund. “It’s a very powerful response that limits the downside of the periphery,” says Morgan Stanley. “If it goes ahead, it would explicitly support the Euro project,” Renta4 flags. “The agreement between the two main powers in the region can be seen as a definitive push towards the adoption of new stimuli and greater coordination in the response to the current health crisis,” says Banca March. Finally, Intermoney points out that “the mere fact that the Recovery Fund proposal is led by Germany and France makes it quite likely that it will be approved. Particularly when Macron pointed out that there would also be close cooperation with Italy and the Netherlands. Then, the Franco-German plan would have more guarantees than the visible ones.”

Nevertheless, the problem of conditionality could once again dampen optimism and will continue to keep member states’ positions far apart. The text of the proposal makes it very clear that it is based on “a clear commitment by member states to pursue sound economic policies and an ambitious reform agenda.” So far, Italy and Spain have been reluctant to admit interference from the EU in their respective economic agendas. The Austrian chancellor said after a phone call with the leaders of the Netherlands, Denmark and Sweden that his position “remains unchanged.” They remain willing to help the most affected countries but via loans.

Furthermore, the proposal from Angela Merkel and Emmanuel Macron emphasises the strengthening of European health sovereignty, an increase in research capacity and the development of vaccines and harmonised methodology in data processing. It also highlights the acceleration of the ecological and digital transition and the strengthening of European industrial capacity and sovereignty.