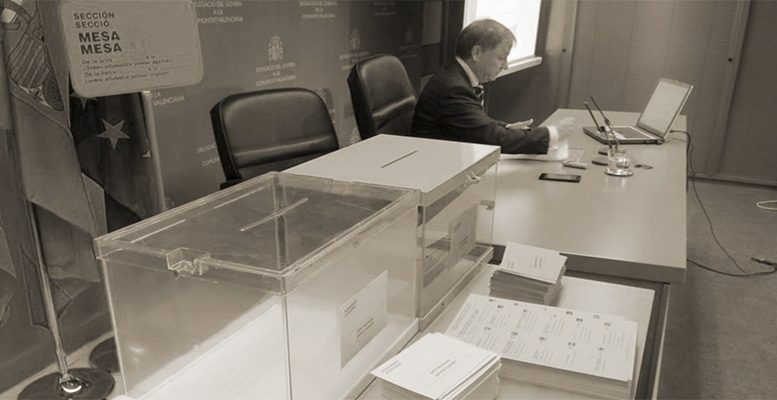 Electoral ballot box during a past election in Catalonia

On the day when Catalonia votes for a new government, the region’s citizens are very confused about the reasons for the situation they find themselves in and who to blame. There is also a tie in results between the independence block and the constitutional alternatives within the Catalan society. And to top it all, it’s very fragmented, an additional problem because there are seven parties competing with each other. The same as happened in Germany, which is in a much better situation and where the arrival of a seventh political force – the populist Alternative for Germany – in the Bundestag has shaken up that country’s traditional stability.

The first premise is contradiction. Catalonia is confused about the reasons behind the current situation and collectively doesn’t really know who is to blame and where it should be heading. And not so much because of any rational calculation but more because feelings play a big part in the nationalist vote.

So there are strong, contradictory majorities: 77% feel as if they are in their own country when they travel in Spain, 11 points higher than a month ago, according to the latest reliable survey, published by the Vanguardia on December 10. Then 66% believe the process has been negative, while 70% think it has affected co-existence and 61% that it has damaged the international image. With those figures, you could predict there will be a majority in favour of constitutionalism. But the same survey – homogeneous data – provides results which actually reveal the opposite: 59% do not approve the implementation of Article 155, the same percentage believe that legal action against the former Generalitat government and the fact that some councillors are still in prison, is not justified. And 53% consider them to be political prisoners.

And the contradictions don’t end there: 68% believe that the Catalan economy has suffered from the declaration of independence, while 62% think the fact that almost 3,000 companies have moved their headquarters out of the region will have a negative impact in the short or medium-term. But straightaway – and no matter how incredible it seems – 72% state that this will not influence their vote. The vote for the independent parties shifts between 44% and 46% in all the surveys. So this means that a not insignificant part of separatist voters will maintain their vote despite the fact they know it will damage the economy. So it’s obvious we are dealing with a tide of emotions where the Catalan nationalist feeling and the criticism of the Madrid government – and the PP – play a big part.

Perhaps this can be seen more in the response to where the responsability lies for the lack of dialogue: 41% believe that Madrid is to blame, compared with just 15% who attribute the responsability to the Generalitat and 30% who lay the blame at both governments. What is clear is that – for whatever reason – the Rajoy government’s communication policy with Catalonia at the very least has not worked.

The second premise is division. Every survey has been saying it for years: Catalonia is split into two practically equal halves with respect to independence. In some surveys, the secessionists win with a little over 45% and in others the constitutionalists with a similar percentage. And this translates into the predicted election results. The independent block will have between 44% and 46% of the votes (slightly lower than the 47.8% obtained in 2015), and the constitutionalist parties a slightly higher percentage than in 2015 but along the same lines. The candidacy of the ‘comunes’, backed by Ada Colau and Pablo Iglesias, will get 7% or 9%.

But if the secessionists win in the provinces of Girona and Lleida where, thanks to the Spanish electoral law, an elected MP needs less votes than in Barcelona, the surveys assign between 66 and 69 MPs for the independent block, when the absolute majority is 68 seats and in 2015 they obtained 72. In other words, while the independent block might get less seats, they could repeat  – although they could also lose – an absolute majority. The problem is that due to the ‘comunes’ 7% or 9%, the constitutionalists will not be able to obtain – unless there is some sort of spectacular turn around – more than 61 or 62 seats. So the conclusion is that the independent block may get a majority or may lose it, but the constitutionalists can’t obtain it on their own. They would need to pact with Podemos, which would give them the 68 or 69 MPs.

Third and final premise. The formation of a majority government will always be complicated and another round of elections can’t be ruled out. So political uncertainty will continue to hang over the Spanish economy, at least for a few weeks.