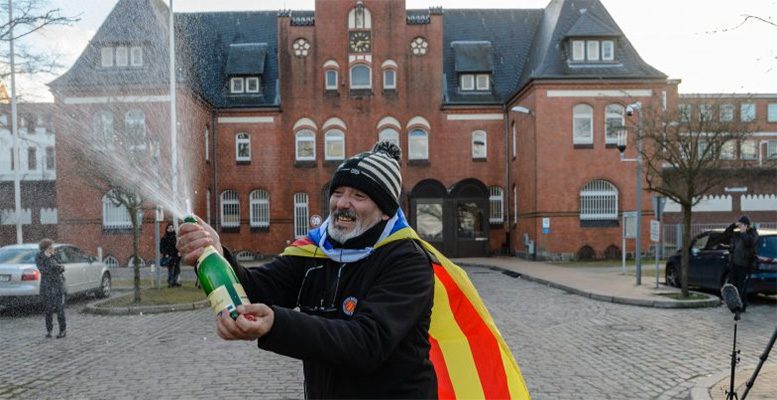 Is Germany pro-independence? No, no it isn’t, despite the fact that the separtist propaganda operates intelligently in Germany – with Puigdemont top of the list, in his role as the victim of an oppressive and anti-democratic Spain. And also despite the mess created by the decision of the Regional High Court of Schleswig-Holstein not to extradite Puigdemont to Spain for the crime of rebellion.

That said, Schleswig’s decision forces us indirectly to understand that “the conflict between separtists and Madrid is of a political nature.” Does Spain have a project for Catalonia? That was Puigdemont’s question during his press conference in Berlin. The fact that Rajoy has not taken any political steps towards offering an alternative to the two million separatist voters is Germany’s biggest criticism against Madrid.

It also doesn’t accept that Puigdemont always puts independence as a prior condition for dialogue. But now for there to be any dialogue, a Catalan government with which to negotiate is what is needed.

This is the most generalised analysis in the German press. Which doesn’t mean it should be interpreted as an absolution. Ladurner: “Puigdemont is neither a hero nor a persecuted politician. He has not just attacked the Spanish constitution but also the regional Estatut. He has divided the Catalans because his separatism is a bet on permanent provocation and his flight from Spain forms part of his strategy to escalate the conflict.” Ladurner concludes: Puigdemont is not a martyr and the Catalans are not an oppressed people.

Sandra Louven, Madrid correspondent for the economic daily Handelsblatt thinks the same: “Puigdemont is not a persecuted politician, but someone who consciously violated the law.” She adds: “Spain is not pursuing any politician for calling for independence. The Catalan separtists are MPs in the Catalan parliament and have been playing politics for years with the issue of Catalonia’s independence.”

Whatsmore, Germany would not be pro-independence for two questions. For solidarity amongst the regions, on the one hand; and for respect for the Constitution, on the other. If Catalonia were to become independent and self-govern, deciding itself what to do with the money it raises in taxes, why should Germany remain in the EU and finance the poorer states in the Eurozone? And all this at a time when France and Germany are predisposed to advance with the European project: which would mean Germany paying more, of course. Because it can afford to. Is it not incongruent that on the one side there is the desire to advance towards European integration and, on the other, people are seeking division?

Germany wants a united Europe. Berlin has insisted that the question of Puigdemont should be resolved within the framework of the Spanish constitution. And the German government has always supported the Spanish one in its efforts to defend this order, according to Ulrike Demmer, deputy government spokesman. The fact the Federal Justice minister, Katarina Barley, said the decision of the Regional High Court of Schleswig-Holstein not to extradite Carlos Puigdemont to Spain for the crime of rebellion and let him go free with a fine of 75,000 euros was “absolutely correct” was a big mistake. A political error. Up to that moment, the German government had flagged that it was a question to be resolved in a legal environment. Barley stoked the fire by adding that now Spain will have to argue the extradition plea based on the crime of embezzlement, something which she believes “will not be easy.” And in that case, “the detention order will be lifted and Puigdemont will be a free man in a free country, in the Federal Republic of Germany.” Words which could be interpreted as alluding to Spain not being a free country.