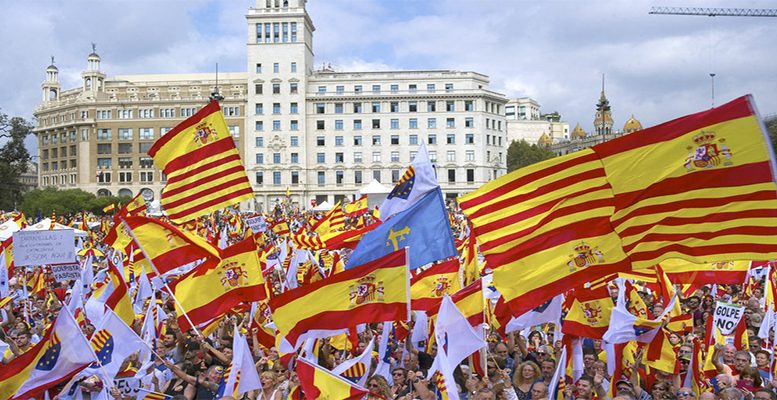 Spanish and Catalan flags in Barcelona

The imprisonment of the Catalan separatists leaders will allow the secessionist parties to focus their December 21 electoral campaign on protesting against the State’s “authoritarian drift” and not on their own sad management of the situation. Many Catalans not in favour of independence see the measure as disproportionate. It’s not so much that they think the law should not be applied, but that everyone has the right to be presumed innocent and to a fair trial. And so unconditional imprisonment prior to the trial should be an exceptional measure.

But the sin carries its penance and, in contrast to what happened in 2015, the secessionists are going to present themselves for election in two separate groups (three, counting the CUP). And the fight between the ERC group, headed up by Oriol Junqueras from the Estremera prison, and the PDeCAT lead by ex-president Puigdemont from Brussels, will reveal the failure of the operation and the internal differences which exist.

The result cannot be foreseen at the moment, although all the polls indicate that there won’t be any major changes with respect to the elections in 2015. That said, the last CIS survey indicates that Ciudadanos could be the party to get the most votes, so the independence movement would lose the absolute majority. It would just be a shift of votes of 2%.

In any event, it seems that ERC is going to get quite a lot more votes than PDeCAT. The CUP will lose some, there is a moderate rise in trend for the PSC under Miquel Iceta and the PP and Ada Colau’s party stable. Whatsmore, a clear alternative majority doesn’t look as if it will be easy – one formed by the PPs and the Cs. Then Colau’s party, linked to Podemos, would have some capacity for arbitration and a slow and laborious cross-party agreement between the separatists and the constituionalists cannot be ruled out.

So the outcome of the 21-D elections will not easily bring a quick solution to the problem. But both in the case of the independence movement losing the majority of seats (it no longer had the majority of votes and it’s almost impossible for it to obtain) or there being a division over the future, the path towards normalisation will have started.

And there are many things riding on 21-D. The Catalan economy has already begun to cool. In the first nine months of 2017 it grew at annual rate of 3.5%, more than the Spanish economy, but the first figures published for the month of October are very worrying. There is a clear decline in tourism and  reserves from international conferences. Unemployment rose 3.67% in October – which is not a good month – double the Spanish rate. Some 70% of businessmen say sales dropped in October compared to the same month a year ago.

Although it’s still early days – and the European Commission has emphasised this – to draw any conclusions, most research departments flag that there is a clear risk of the Catalan economy falling into a recession next year. And the Catalan recession would affect the Spanish one which, according to BBVA estimates, could lead to Spanish GDP being between 0,2 and 1,1 points lower in 2018 than the 2.5% previously predicted by the majority of analysts. With good reason citizens point out – according to the latest CIS survey – that Catalonia’s independence is now its second biggest concern (29%) after unemployment but ahead of corruption.

So everyone in Spain is focusing on 21-D. And not just because of the Christmas lottery (that actually takes place the following day). The relative consolation is that there will still be favourable overseas winds, at least for a few months. Both Europe and the US – which have now overcome the crisis – are growing above 2% with a postive outlook and jobs are being created again, although salaries are not increasing very much. And the US Federal Reserve as well as the ECB are going to follow a prudent path with regard to withdrawing monetary stimuli, against a backdrop of low interest rates (in the US) and very low rates (in the Eurozone) for the whole of 2018. In this context, “the poison of nationalism”, which Jean-Claude Juncker denounced in Salamanca, should be able to be confronted with less anxiety and with the aim of finding a solution where reason and stability will take priority over urgency.