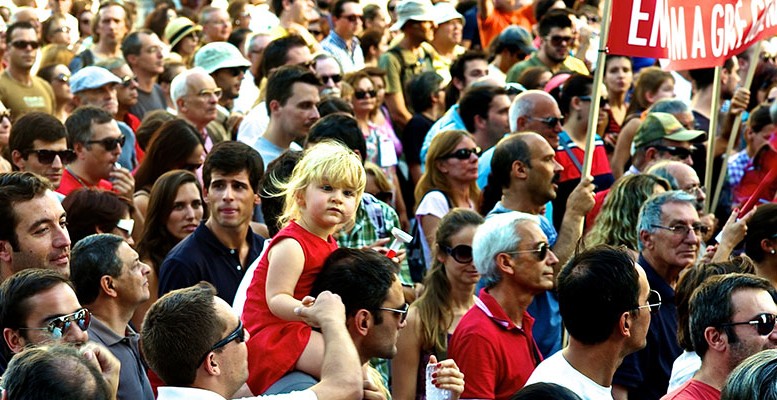 Guntram B. Wolff via Caixin | One of the clear trends of 2015 was the rise of parties that radically challenge the consensus of traditional parties and their representatives. This trend is perhaps most visible in France and the United States but is also strong elsewhere. It will likely be a major force shaping European and global policies. A reflection on its causes is imperative to define the right policies for 2016. We should also ask what could it mean for China.

One of the main drivers of this political phenomenon is arguably an increasing sense of insecurity in large parts of the middle class. Many voters for the surging parties come from middle-class or working-class backgrounds. For example, support for Donald Trump is particularly large in the income group of less than US$ 40,000, followed by the income group earning up to US$ 75,000. And while the theory of “angry-white-man” voting for Trump may fall short of a full explanation of the changing voting behavior, it is undoubtedly true that these groups of society are under pressure to preserve their status and stay in good jobs.

Data published by the Pew Research Center shows that the American middle class is losing ground. The real income of the 60th percentile of a U.S. household has not changed since 2000. In France, the issue may be less one of income inequality, which has barely changed but rather a growing sense of job insecurity. And while long-term unemployment has “only” increased from 2.8 percent to 4.4 percent since 2008, the French unemployment rate has been above 7 percent for 30 years now. Youth unemployment is also stubbornly high in several European countries.

What is behind these pressures and what could they mean for China? One of the key issues to examine is the future of work. The share of labor income in national income has been falling in several advanced economies and most notably in the United States.

The root causes of this are subject to debate. Some argue that the decline is a result of technological change that results in loss of jobs through mechanization. Technological change undermines traditional business models through new sharing economy models. Trade integration, in turn, exposes the remaining workers to tough global competition. Political scientists have argued that there has been a shift in bargaining power toward capital. Others have highlighted that the lack of capital investment reduces the share of labor income by lowering productivity and thereby wages.

Irrespective of the reasons, a falling labor share raises important questions for the future of the European welfare state. The welfare state has shielded households somewhat from the impact of increasing inequality and the risks of unemployment. Yet, the welfare state is based on taxation of labor income. With an increasing share of income going to capital, its revenue sources are under pressure – while unemployment and financial crisis weigh on the spending side and erode revenues.

Simple answers to these complex questions will fail, contrary to the claims of the surging parties. For example, closing borders to trade will only make imported goods more expensive and undermine our ability to export. This would be a heavy burden on many companies in France and elsewhere, destroying jobs without bringing benefits. Migrants, in turn, are not only contributing daily to our economies but they are also net contributors to public finances and aging Europe certainly needs migrants to safeguard the welfare state that is under pressure from aging. Closing borders to any immigration would seriously undermine our economic performance.

But these simple answers by populists represent a real danger also for China. Already now, there is a strong sentiment that China’s integration in the global economy has destroyed many jobs in the West. Numerous voices call for laxer competition policy enforcement in Europe and new trade barriers to China and other emerging economies to protect jobs at home and prevent undue social dumping. Emerging economies should certainly embrace a communication strategy in which firms exporting to Europe or the United States do not benefit from undue subsidies. The more imports from emerging economies will be perceived to result from unfair competition and social dumping, the more ground populists will gain that promise easy answers such as new trade tariffs.

But of course, confronting populism is mainly a task for established parties. They should make clear that instead of easy protectionist answers that do not work, the European Union will need informed debates and forceful actions. The EU in particular needs to show that it can give answers and implement them effectively. If falling labor income is the result of a lack of capital, taxing investment would put further pressure on labor income. If, however, robots are taking our jobs, we will need to find ways to make sure that robots and their owners pay. Yet, taxing capital owners requires cooperation across countries in order to prevent companies from avoiding taxes. This is a clear example of how the EU could show its effectiveness.

The EU was conceived as a way to address our common problems in a more effective way. In trade, it was designed to not only remove internal tariffs, but be a global player that can define clear social and environmental standards on imported products. In terms of mobility, internal border controls were removed to improve lives, but the adequate external border controls and better internal security cooperation were not built up. And yes, monetary union was started with inadequate structures in place and remains in need of repair and growth. In 2016, traditional parties need to deliver on the issues identified by the populists with informed answers. China and other emerging economies should watch the developments carefully as they could have large implications for their own economies and also foreshadow future domestic developments.