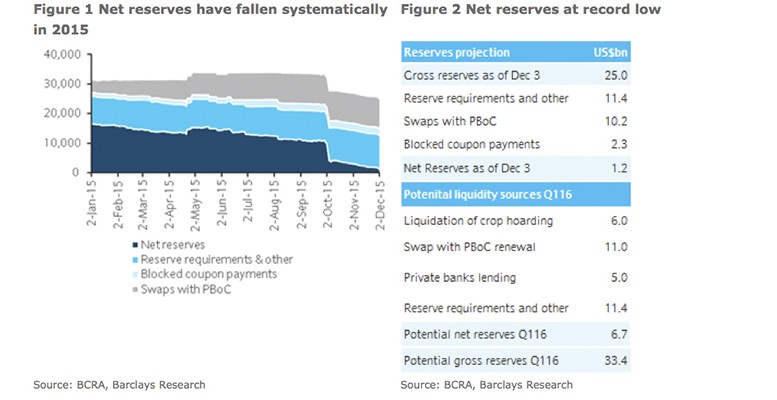 BARCLAYS | In an interview this Sunday with La Nacion, Argentina’s incoming finance minister, Alfonso Prat-Gay, made some important statements about short-term economic policies. We think that his comments are steps in the right direction and indicate pragmatism, in that they seek a solution to economic problems while addressing restrictions imposed by social, political, and economic realities. While he did not provide a specific date for devaluation, he tied the timing to certain prerequisites. This supports our view that FX controls will be fully dismantled after some replenishment of central bank liquidity.

1) Timing of FX liberalization: Prat-Gay mentioned that he would follow through on Macri’s campaign promise of lifting FX controls once two conditions are met: there are new central bank authorities and there is a sufficient supply of dollars. He said that the government expects supply from the sale of hoarded crops and “another source of reserves” that it would announce as soon as it has confirmation, probably this week.

While he did not provide a specific date for devaluation, he tied the timing to certain prerequisites. This supports our view that FX controls will be fully dismantled after some replenishment of central bank liquidity. Because of the political decision of the outgoing administration to prevent a nominal devaluation and remain without fluid market access, reserves have fallen consistently in 2015. The reduction in liquid reserves has accelerated since the primary elections as expectations of depreciation after December 10 increased: Last week, gross reserves fell $726mn, and we estimate that net reserves stood at a record low of $1.2bn (Figure 2) as of December 3.

We believe that the combination of a higher starting level of reserves and a sharp interest rate hike could reduce the magnitude of the initial peso overshoot, which could reduce the effect on inflation. Therefore, we expect measures that create economic incentives for farmers to sell hoarded crops (higher interest rates, weaker peso, and lower export taxes) and steps to access hard currency markets. However, we continue to expect that given the lack of financial vulnerabilities (in the private and public sector) and likely still-scarce liquid reserves, the authorities are likely to rely more on interest rates than on central bank intervention to keep FX from overshooting.

In terms of the speed at which the central bank can change hands, we envisage three alternatives for President Vanoli to leave his post. The first is that he steps down, which we believe is the most likely. President Vanoli has few incentives to stay and battle the next administration with almost no reserves to defend the ARS at its current level. The sooner he leaves, the easier it may be to blame the imminent devaluation on the next administration. In fact, Vanoli said last Wednesday that he would decide soon if he will resign or not by December 10. The second alternative is to remove him through a presidential emergency decree that would be binding unless a bicameral commission rejects it within 10 days. The third option, which would take longer, would require the executive branch to allege that he has breached the central bank’s charter. The executive would have to summon a bicameral commission and ask it to evaluate whether Vanoli should be removed, but the counsel of the commission is non-binding, and Macri could still decide to remove him.

2) Holdout negotiations: Luis Caputo (incoming secretary of finance) will have a meeting with court-appointed Special Master Pollack soon. He said that Macri’s aim is to start conversations at the district court as soon as possible. He highlighted, however, that starting talks did not mean that the republic would not maintain a strong negotiating position.

We think that the announcement that Caputo will be meeting with Special Master Pollack next week is positive, in line with our view that a change in legal strategy is required to set negotiating conditions. The republic’s current intransigent position in court (in contempt of courts) puts it in an even worse position to reach a negotiated settlement with holdouts. However, key negotiation parameters remain uncertain: a) how hard-line holdouts will respond to a settlement negotiation for claims that have been supported by the district court, the Second Circuit, and the US Supreme Court b) whether the district court can provide some sort of “soft” leverage to the new administration to facilitate a deal that is politically and financially feasible, and c) how supportive congress will be of a potential deal whose main parameters remain uncertain at this stage. That said, a more constructive dialogue in the courts is likely to help the negotiation process, in our opinion

3) IMF: Prat-Gay also said that eventually an Article IV consultation would not be a problem, as the new administration would be fine with an international entity looking at the situation in Argentina.

Article IV is a necessary step to access IMF financing lines. Therefore, the start of a consultation means the sovereign could be getting closer to accessing a lender of last resort in a situation of low reserves. This should be supportive for credit and help anchor inflation/depreciation expectations.

4) Social and economic pact: Prat-Gay mentioned thatthe new administration will look for a comprehensive agreement among the government, unions, and firms in mid-January. Inflation will be revised under a new agreement with a clear goal of setting inflation targets that diminish throughout the administration’s term. He also specifically said that the level of prices that will be used as reference is as of November 30. Interestingly, these negotiations will face the challenge of the lack of a credible CPI index.

This is in line with our expectations of how the authorities will attempt to manage the initial distributional effect of the inflationary consequences of the peso depreciation. At end-February, critical wage negotiations will start with the teachers unions. With this in mind, we think that a “social pact” is crucial to preserve governability: unions could be willing to forgo an increase in wages and firms could make some concessions on pricing power in exchange for a weaker currency, access to input imports, and some degree of protection against external competition. Separately but in line with Prat-Gay’s announcement, soon-to-be Minister of Labor Triaca said that the administration will ask businessmen to control prices and workers to incorporate (the declining) inflation expectations that the new government will generate in their demands; in return, the government would reduce the scope of income taxes and refund the VAT for the basic consumer basket. In addition, Prat-Gay specifically said that the price reference for these negotiations will be November 30 – when inflation was 24.7% y/y – suggesting that it would not include the acceleration of inflation that has occurred in the first weeks of December (in anticipation of the peso depreciation) and that we expect to continue by mid-January, when the social pact negotiations would start, in our opinion.

We believe that Prat-Gay’s announcements are positive because they address needed economic adjustments while seeking a socially bearable solution within the limits imposed by weakened economic fundamentals, reducing governability risks. Securing a supply of dollars before lifting controls on demand to prevent a major overshoot is one such measure. If, instead, the new administration chooses to fully lift FX controls before restoring central bank liquidity, the risk is that an FX overshoot could lead to a sharp increase in prices in the middle of the Christmas holidays. This could, in turn, increase the likelihood of protests and risk the president’s popularity too early in his tenure. By the same token, highlighting the importance of a social pact and recognizing the need to make some concessions, such as refunding the VAT and income tax, acknowledges the need to preserve governability. Lastly, recognizing the importance of regaining market access but conditioning a settlement on “hard bargaining” also points to the need for a negotiated solution that is politically viable. The question remains, however, what is the position of holdouts and the district court in this respect.