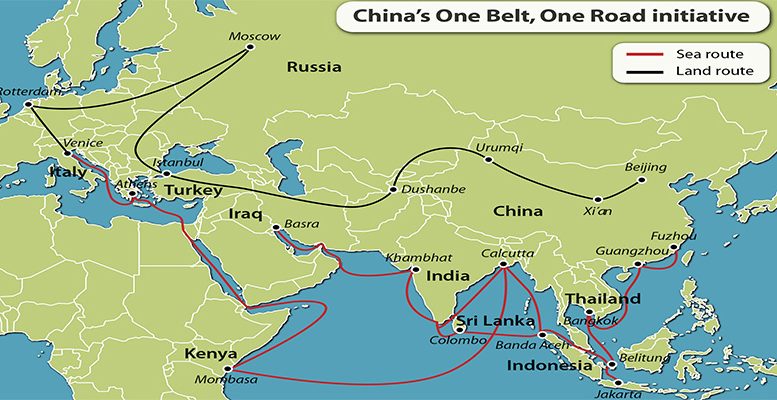 Richard N. Cooper via Caixin | The ancient “Silk Road” was not well-defined, but rather involved several routes through central Asia and Persia and modern Turkey by which silk fabrics traveled from the Han Dynasty (206 B.C. to A.D. 220) as far back as the Roman Republic, over 2,000 years ago. Depending on political developments over such a long distance, the silk trade periodically languished and revived, especially during the early Tang Dynasty (618-907) and again during the Yuan Dynasty (1271-1368), when Mongols controlled most of the route from China to eastern Europe. The Tang Dynasty and again the early Ming Dynasty (1368-1644) developed sea routes through the Indian Ocean, at least to eastern Africa and the Red Sea, some say even farther. A later Ming emperor not only declined to finance these expensive official voyages but, bizarrely, prohibited even private distant sea-born voyages.

The risks and dangers of the land route induced the Europeans — led by the Portuguese, followed by the Dutch, British, French and much later, the Germans — to seek a sea route to the Spice Islands of Southeast Asia and to East Asia. From China, they imported not only silk, but also fine porcelain (called “china” in English) and especially tea, which had become a favorite beverage. Lacking the high value of silk, the other commodities were much more economical as well as less risky to ship by sea.

In 2013 President Xi Jinping announced — in Astana, Kazakhstan — an initiative to create a new Silk Road, by land and by sea, linking China with Europe (and Africa). This has been labeled the “Belt and Road” initiative. The initiative was declared four years ago, initially as a slogan, the details of which are still being worked out although much has taken shape in the meantime. It includes some things that were started or planned well before 2013, such as enlarging the port of Gwadar in Pakistan and building an oil pipeline to Yunnan province through Myanmar.

The general concept seems to be to improve Chinese communication — viewed broadly — with Europe and Africa, including intermediate nations, especially the “-stans” of central Asia, by building or improving networks of transportation and optical fibers, including local infrastructure, such as ports, airports, rail lines and highways, but also the generation and transmission of electricity.

The sea route has been well-established since the Suez Canal opened in 1869, permitting ships to avoid the long trip around Africa, but local ports and channels can be improved, such as in Burma, Pakistan and Djibouti.

Modernizing land routes will be much more difficult, both in engineering terms and especially in economic terms. The distances are vast, through relatively poor and lightly populated places such as Mongolia, Kazakhstan, and even Russia’s western Siberia. Also, Russia is notorious for charging high fees for the use of its territory, whether the increasingly ice-free northern sea route or its air space. (The Panama Canal provides a sharp contrast here: Opened by the U.S. in 1914, two years before the trans-Siberian railroad, the canal stipulated that toll charges for all users should cover only operating costs, not profits, and not even interest on the debt incurred to build the canal; the U.S. similarly made the Global Positioning System available to all users free of charge.) And for rail, there is the complication that Russia uses a wider gauge of track than the standard gauge used in China and Europe (installed in the late 19th century for strategic reasons), thus weakening the economics of trans-continental rail travel.

China has indicated a willingness to provide financing for the Belt and Road initiative on a large scale, partly through existing institutions such as the China Development Bank and the Export-Import Bank of China, which together have been committed to provide 380 billion yuan ($56.1 billion) to the endeavor, and partly though new institutions such as the multilateral Asian Infrastructure Investment Bank and the Silk Road Fund, which is to be augmented by 100 billion yuan, or $14.8 billion. This compares with recent annual commitments of roughly $30 billion each by the World Bank and the Asian Development Bank. Of course, the Chinese pledges are totals, not an annual figure. And it is mainly declaratory so far; they might be increased in future, but reality may also be less generous. Already there are worries in Pakistan about the large debt burden it will incur to China as a result of ongoing Belt and Road activities in that country (many started before 2013), and whether accessible economic gains will be sufficient to service it.

China also explicitly aspires to use the Belt and Road to increase international use of China’s currency, the yuan. This will be natural insofar as loans from China are made to purchases exports and services from China, but other suppliers may be reluctant to accept payment in yuan without adequate channels for even short-term investment in yuan, and debtors may be reluctant to accept long-term debts in yuan without being confident that China’s market will be open to their exports in the long term.

In mid-May, the Chinese government hosted a major conference on the Belt and Road initiative, involving 130 countries and political leaders from 29 of them. Xi opened the meeting with an inspiring speech outlining the mutual gain participating countries could expect from the initiative, not only in economic terms but in terms of peace (necessary for prosperity) and in terms of cross-cultural mutual understanding and mutual respect, and not incidentally casting China as a cooperative and supportive partner in globally constructive endeavors, including preservation and extension of the open world economic order China inherited and from which China itself greatly prospered.