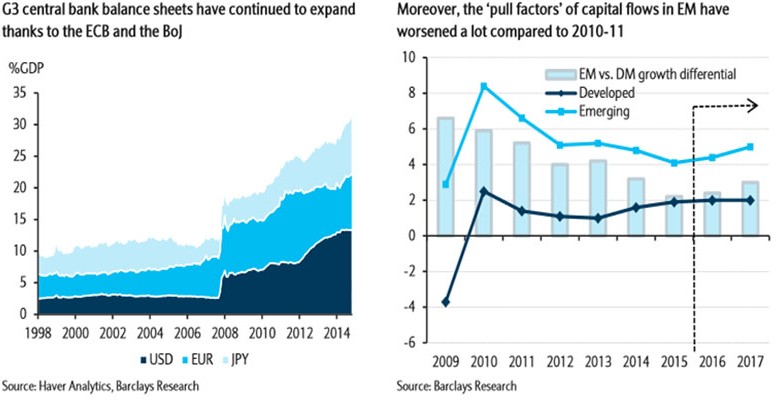 BARCLAYS | We believe a further expansion in ECB QE will only have regional, and overall limited , effects on EM. Extending the discussion to the effect of BoJ QE, we come to similar conclusions.

The effect of ECB QE through the credit channel is constrained by the lack of substitutability of USD liquidity with EUR liquidity. EMs continue to borrow heavily in USD. The transformation of EUR into USD funding depends on the ability of banks and/or markets to facilitate this, which h as been severely impaired in the post – crisis world of higher capital requirements and regulation.

However, ECB QE is likely to have some positive effect on investor portfolios in the euro area and the portfolio channel is likely to lead to a compression of EM risk premia in its immediate vicinity (ie, CEE). This may happen in anticipation of investor inflows, even though we find that actual investor flows tend to lag. Concerns about USD liquidity in EMs elsewhere are likely to remain in place and we believe the BRL, TRY, MYR and ZAR, as well as Turkey and South Africa credit spreads, are vulnerable.

Liquidity in euros is expected to be reinforced by moves by the ECB to further expand its balance sheets at its 3 December meeting. We expect the ECB to extend QE beyond September 2016 and to cut the deposit rate to – 30bp from – 20bp at the forthcoming meeting. Indeed, the additional ECB QE alongside the BoJ’s QE has ensured that G3 central banks actually expanded their balance sheets at the fastest pace since late 2011.

We ask whether this modest expansion in G3 balance sheets led by the ECB , supported by negative rates, and the BoJ’s continuing open – ended QE , can be a salve for EM assets that have borne the brunt of tighter USD funding.

The beneficial effects of ECB QE for EMs can be boiled down to : 1) the credit channel ; and 2 ) the portfolio balance channel. The former refers to the ability of EMs to borrow more externally in EUR to offset the reduction in USD liquidity. The latter refers to the compression in risk premia in core (G3) markets , leading to (the pricing in of) investor flows particularly into EM bond markets, compressing risk premia there and appreciating their exchange rate.